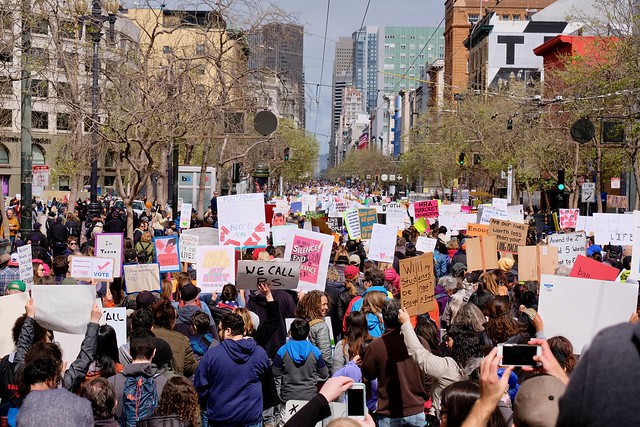 The San Francisco “March For Our Lives.” Photo by Gregory Varnum, used via Creative Commons license. Click on photo for original.

A few thoughts on the March For Our Lives, in no particular order:

1. I personally didn’t expect it to be as large as it turned out to be, with 800,000 protesters in Washington DC and hundreds of thousand more (at least) across the country. There were even several hundred marchers in Dayton, the largest city near me:

I had honestly thought the school walkout earlier this month was going to be the crescendo of the protests. Clearly, this shows what I know. If there were indeed 800k marchers in DC, it’s one of the largest one-day protests in history, and that’s not chicken feed.

2. And it’s also clearly terrifying the NRA and its selected quislings, who have been reduced in the last couple of days to mocking the teenagers at the center of the protests, because nothing makes grown adults look more in control than making fun of children half to a third their age, whom have lost friends and schoolmates due to gun violence. What makes them angrier is that the kids are having none of it; I suppose when you’ve seen your friends murdered, being mocked by an NRAtv apparatchik or a Twitter “personality” is not nearly as devastating as those latter folks would hope it is.

The NRA was clearly hoping to do what it’s always done, which is to ride out the immediate outrage until it was over, with the tried-and-true one-two punch of “thoughts and prayers” and “it’s too soon.” But again, the kids weren’t having it, and unfortunately for the NRA, a bunch of well-spoken, laser-focused teenagers with a legitimate grievance regarding gun violence plays better than a bunch of screaming, angry guntoters who want to sell the idea the way to solve the problem of people shooting up schools with assault rifles is to force teachers to arm themselves.

3. Does this mean that we’re finally at the bend in the curve where gun manufacturers and/or fetishists don’t in fact hold the legislative process in thrall? Nope! The NRA still has a huge amount on money and GOP primary voters are still reactionary and it’s still several months until November and even further to January. We will see whether people, particularly young people, decide that it’s easier to march than vote, and whether the young marchers and protesters end up being representative of the young vote (this is where I trot out the curious statistic that in the first presidential election after 18 year olds were given the vote, the kids, the hippie generation, voted for Nixon. 2018 is not 1972 in all sorts of ways, but the question is who actually gets out to the ballot box in November).

The march was a sign and perhaps a portent of November, but signs and portents can be wrong. In practical terms, what matters is the vote. The NRA is reduced to spitting on teenagers at the moment, but it’s patient and it has a long-term plan and it knows March (and marches) ain’t November. So, the moral here is: Kids, make sure you’re registered to vote and then vote.

4. With that said, another leavening perspective, which is that the teens aren’t going anywhere, and they’re not getting more conservative with age. Trump didn’t win the popular vote and the GOP can’t win in Congress without gerrymandering, and the last two years has energized entire swathes of the voting public never to vote for the GOP again, at least on the national level. I mean, it’s worked that way for me — I wasn’t a regular GOP voter ever, but I’ve voted for a few here and there. Now there’s literally no chance I’ll vote for another GOP candidate for state or national office because there’s nothing in the party’s current political ethos that isn’t nihilism and bigotry. And I’m a 48 year-old straight white dude with money, i.e., the GOP’s natural constituency. The kids and the women and the minorities and the queer (and many of the people who love any or all of the above) are even further into the “oh hell no” column than I am, when it comes to the GOP and what passes for conservatism these days.

It doesn’t mean that the 2018 vote is lost for the GOP (or the NRA, which has most of the GOP in its pocket, among other interest groups). As I noted above, there’s a difference between marching and voting. And as an example I don’t ever see where I live nudging into the Democratic column, either now or for the foreseeable future. But in the long run, these kids aren’t ever going to forget who only offered “thoughts and prayers” when they were getting murdered as teenagers, and who mocked them for protesting because their friends and schoolmates were murdered. These things tend to stick with you. And that’s only one legitimate grievance they have.

Mind you, this is why the GOP’s revanchists are making hay while the sun shines; they know it’s not going to last. Just one more Supreme Court justice! they cry. For my part, I’m looking forward to this iteration of the GOP and “conservatism” getting the punt. Yesterday’s march may or may not be a harbinger of the 2018 elections, but it is a reminder that time will not stand still, and that one may still hope for better days ahead. The kids who marched deserve that. As do the rest of us.

99 Comments on “About That March”