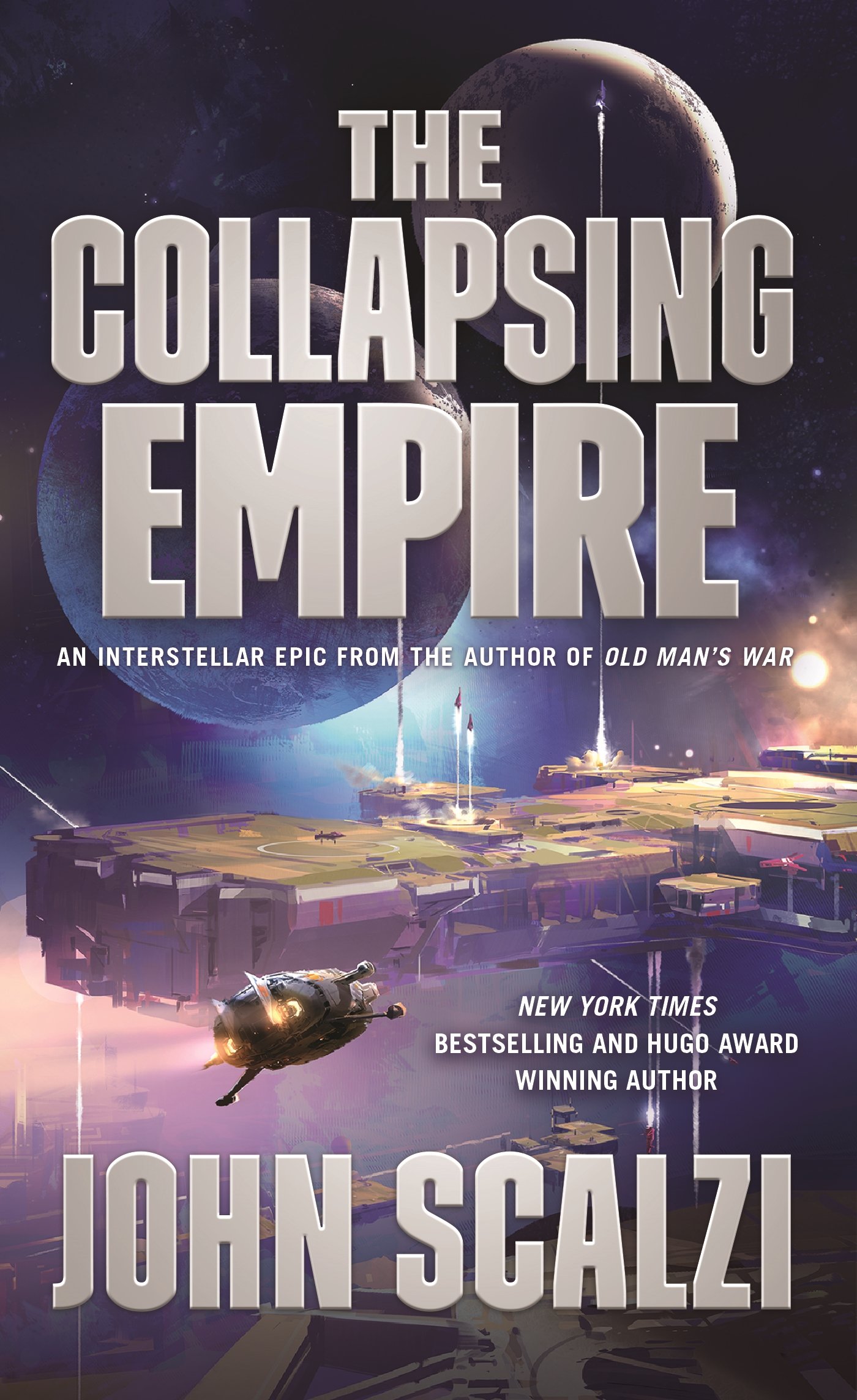 1. First, and obviously, I’m delighted that The Collapsing Empire has been nominated. I like that book a lot, and it has some of my favorite characters ever in it, so to see it on the Hugo ballot this year is real validation for me. To be honest I had no sense of whether the novel was in the awards hunt this year at all — it sold well and the reviews were good, but it was also a wide and varied and very good year for science fiction novels. So when I was notified, well. I was very happy. Thank you to everyone who nominated the book. You made my month.

2. I had no idea whatsoever which other books would be nominated in the novel category (well, that’s not entirely true; I strongly suspected The Stone Sky would get a nod, and sure enough, it did), so when the category came out, including New York 2140, Six Wakes, Provenance and Raven Strategem as well as Empire and Sky, I was also delighted. Here’s the thing: as a writer, when you’re up for an award, you want your fellow finalists to be really really excellent. When your peer group is good, it reflects well on you and your own work. This is a very good, very solid field of works, from some of the best writers working in science fiction and fantasy today. I could not be more pleased to stand among these authors, and to have my work stand among theirs.

3. Because it’s such an excellent year in my category, I can state that I have no freakin’ idea who is the front runner this year. It’s of course polite to say that, but it also happens to be true: I can think of very good reasons why any of the six finalists could get the award this year.

Which is fine with me, I should note. I’m not going to lie, I would be pleased for my novel to win. I am always pleased to win a Hugo. But every author in the category is someone I like or admire, and every novel in the category is award-worthy. I like when worthy works win, even when they are not mine. I will be happy whichever novel gets the rocket this year. It’s a fine year for the Best Novel Hugo.

4. And in fact all up and down the ballot this year, it’s like it is in the novel category: Excellent works and tough choices for the voters. Which, again, is as it should be. I like it when there’s no clear-cut front runner and everyone has to agonize over how they’re going to rank their choices. That’s what makes Hugo voting fun.

As a side bonus, so many of finalists this year are friends of mine and people whose work I admire. It means for me at least the Worldcon this year, and the Hugos, are going to be a blast. We’re gonna have such a good time, folks. You should totally come.

5. To get ahead of a question I know someone will ask, no, there’s not any “puppy” nonsense this year. It appears the changes in nominating finalists to reduce slating had their intended effect, and also, the various puppies appear to have lost interest slamming their heads into this particular wall. This makes sense as it provided no benefit to any of them, damaged the reputations and careers of several, and succeeded only in making their rank and file waste a lot of time and effort (and money). They’ve gone off to make their own awards and/or to bother other media, which is probably a better use of their time. There was an attempt by a cadre of second-wave wannabe types to replicate slating this year, but that unsurprisingly came to naught.

In its stead are excellent stories and people, all of which and whom got on to the ballot on the strength of their work. Which is as it should be.

6. If you would like to vote for the Hugo Awards this year, the way to do it is to get a membership in this year’s Worldcon, which takes place in San Jose this August. You can get an attending membership (which means you get to all the panels and events, including the Hugo ceremony), or a supporting membership, which allows you to vote for the Hugos. For the past several years, the Worldcons have had “reading packets” which have included many of the nominated works; it’s likely this will happen again this year, which makes a membership an additional value. Again, here’s the link to this year’s Worldcon site to find out more.

7. Also, yes, I will be attending Worldcon this year. We’ve been trying to finagle having me DJ an 80s dance there — if being a finalist for the Best Novel Hugo this year does anything for me, it probably makes me hosting a dance more likely. That’ll be a ton of fun, I promise. Hope to see you there.

28 Comments on “Thoughts On This Year’s Hugo Finalist Ballot”