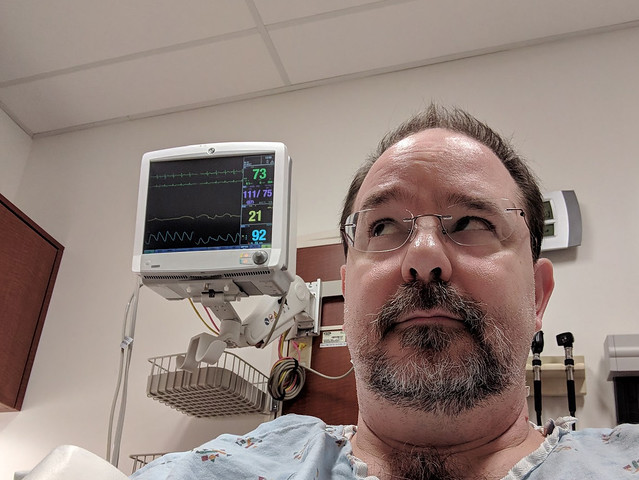 For the last few days I’ve been having a bit of a low grade pain in my chest that wasn’t really going away. I mentioned it to Krissy last night, who informed me I’d be calling to schedule a doctor’s appointment this morning, and this morning, when I indeed called to schedule my appointment and ran down my symptoms to them, they said, “You know what, maybe just go ahead and get yourself to the ER.” Which was not precisely encouraging, I have to say.

Nevertheless, off I went to the ER, to get pricked and prodded and EKG’d and x-rayed and so on and so forth. And the good news is: I’m fine, my heart is fine, everything appears to be largely groovy and there’s nothing even remotely life-threatening going on with me. The less good news is they have no idea why I’ve been having chest pains, so I still have to schedule a doctor’s appointment on Monday and get a stress test and possibly other stuff. It’s probably an alien growing in my chest cavity, which means that if you come visit me on tour and sit in the front row, I can’t guarantee you won’t get wet. Bring a tarp.

Bearing in mind that I was in a hospital ER room with needles in my arm and wearing a hospital gown because of a weird pain in my chest, the experience was oddly mellow and, if not precisely enjoyable, not horrible either. I mostly was just plopped on the hospital bed reading Twitter or napping, and every once in a while someone would come in to check that I hadn’t expired while I waited on the doctor. Honestly I’ve had worse afternoons.

In any event, I’m home now and everything is fine. I’m not dead! And on the way home, I picked up some Pepto-Bismol. Seems to be working. Let’s see how it goes.

98 thoughts on “How I Spent My Afternoon”