And Now, Almost Entirely to Shove the Picture of Me at the Hospital Down the Page a Bit, Here’s Me Wearing a Clown Nose 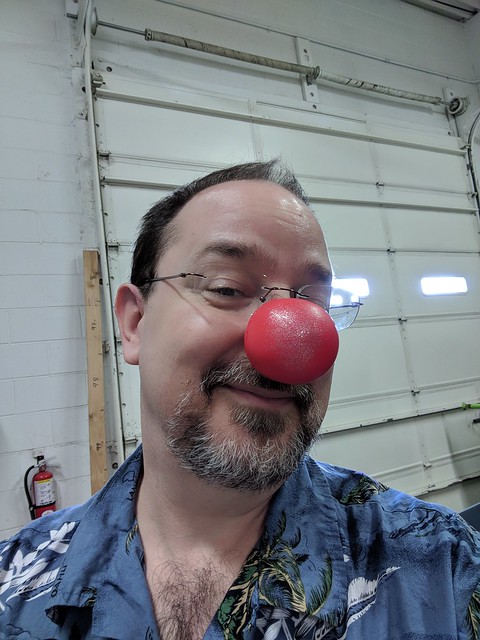 As one does. This photo was taken at the Subterranean Press warehouse last week, while I was signing and personalizing pre-orders of Head On. Why did they have a clown nose? Maybe because they’re a fun-loving lot! Or maybe because they have a basement clown abattoir filled with body parts. Maybe both! Anyway, here you go. I think it doesn’t look half bad on me.

Also thank you to everyone for their kind words and messages, regarding my trip to the hospital on Friday. I’m happy to say I’m feeling generally much improved, which I suspect is down to the Pepto Bismol. Fear not, I’m still scheduling a doctor’s appointment for this week. Better safe than sorry. I also kept my weekend pretty basic and restful. The most strenuous thing I did was mock some dimwits on Twitter, which honestly wasn’t strenuous at all. I won’t go into detail about the mocking here (check my Twitter timeline for it, if you’re curious, it won’t be hard to find), except to say that the last couple of days left me with the firm belief that the concept of free speech, both as a constitutional right and a general ideal, sadly continues to be out of the grasp of many of those who choose to bleat about it online. And that’s a shame.

But enough about me. How was your weekend?

← How I Spent My Afternoon
The Big Idea: The Oracle Year →

31 Comments on “And Now, Almost Entirely to Shove the Picture of Me at the Hospital Down the Page a Bit, Here’s Me Wearing a Clown Nose”