The Big Idea: The Oracle Year 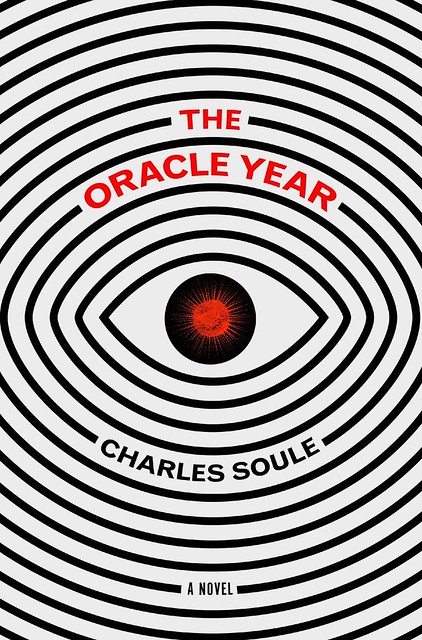 I’m going to make the prediction that you’re going to want to read author Charles Soule’s Big Idea post on The Oracle Year, in which he talks about the future and how each of us makes predictions, every single day of our lives, and what that means for his novel. Am I correct in my prediction? There’s only one way to find out.

What is that, really? It’s not now, and it’s not the past, and that is the sum total of what we know about it.

Everything else is just a guess, a projection based on past events, a calculation of probability. Let’s think about this in terms of a glass of water. (Bear with me – I’m going somewhere with this.)

No, water’s boring. Let’s say… a delectable cocktail (for me, that’s a Manhattan, but YMMV), or a frosty beer on a hot summer’s day, or an ice-filled fountain soda at the movies, or, yes, even a glass of water. You obtain that beverage, and you lift it to take that first sip, and you are certain that what you’re about to drink will be that Manhattan, beer, soda or water.

But why? Primarily because you’ve put together a string of prior events that suggest that it will be what you think it is. You’ve poured the glass of water out of your tap, say. But the city’s water could have been replaced with rubbing alcohol by a nefarious ne’er-do-well, or cosmic rays could have altered the soda from cola to root beer (totally, 100% possible, by the way (I assume)), or your bartender could be trying to poison you, or magic is real and your beer was transformed into something else. We can’t know for sure. Honestly, though, the odds of any of that stuff happening are slim at best, so unlikely that they become pretty much impossible. So, we predict that the drink will be what we think it is, and we go ahead and chug-a-lug without doing an exhausting analysis of the container’s contents.

Just like that drink, every single action we take, every choice we make, is a prediction of the future. We run the odds based on all available information and prior experience that Action A will result in Consequence A (or a range of likely consequences), and we will still be living in a world where the rules of physics apply as they always have, or even bigger, that the world still exists and we are still alive in it.

But hey, there are no guarantees. Anything could happen at any moment. For all we know, an undetected meteor will hit before you finish reading this…

Why am I talking about all of this? Well, I wrote a novel, The Oracle Year, which is concerned almost entirely with the future. It’s about a man in New York City who obtains a hundred and eight specific predictions of future events, large and small, due to occur over about a year’s span of time. He then decides if and how he’ll release the information to humanity, and we see how that changes him, flips the world on its axis, and so on. It’s a twisty-turny thriller, exciting and (hopefully), pretty unpredictable.

In the course of writing The Oracle Year, I had to think extensively about the future and our relationship to it. I’d go so far as to say the future is almost all we ever think about. It’s in the small things, like that automatic, subconscious analysis we do when we’re taking a drink of something, but also the big stuff: wondering about what we’ll do this weekend, who we’ll marry, our career, what our kids will grow up to be, when and how we’ll die.

We make decisions based on our analysis of the future – lots of them. We constantly predict what will happen next on timelines short and long. We have to. It’s the only way to operate, to live.

We’re all prophets, in other words, predicting the arc of our lives moment to moment.

I feel like that’s a given, a premise hard to dispute (although this is, of course, the Internet, which means it’s not impossible to dispute.) Now, here’s the second part of the equation, though – the result on the right side of the equal sign that I came up with after thinking about all of this for, oh, a few years while writing my book.

We’re all, on a very fundamental level, optimists.

After all, if we weren’t, we’d never do anything at all. We’d never drink that drink, because there’s a possibility it’s been magicked into poison. We’d never go to work, we’d never eat food, we’d never ask someone out… because why bother unless the world will continue to exist and we’ll still be alive to see it? We make choices because we assume we’ll get to see at least some not-tiny portion of the future, and human society will exist in a recognizable form therein.

That’s optimism, right? That’s deciding in favor of structure and continuity rather than entropy. Every day, with literally every choice and action we make, we are predicting a future that includes us, and is worth maintaining and building.

How about that, huh? Even in chaotic times (and I think it’s hard to argue that we’re in one of those at the moment), basically every person on Earth is predicting that they’ll still be around tomorrow with every single thing they do.

We’re all prophets, and we’re all optimists.

That, I think, is a pretty Big Idea.

← And Now, Almost Entirely to Shove the Picture of Me at the Hospital Down the Page a Bit, Here’s Me Wearing a Clown Nose
One Week Until Head On →

7 Comments on “The Big Idea: The Oracle Year”