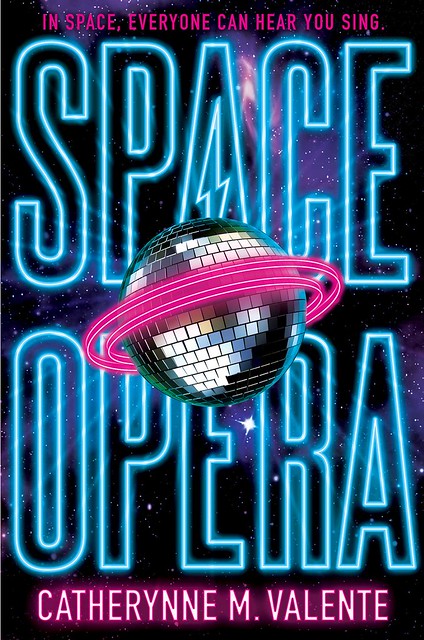 Disclosure: I liked Catherynne Valente’s new book Space Opera so much I gave it a blurb. And as you read the Big Idea below about the book came to be, you might understand why the book appealed so much to me.

Sometimes you plan a book. Carefully. Meticulously. You hone it, prune it, and shepherd it through the publication progress with all the gentleness you’d give to a particularly shy child.

And sometimes a book comes to you. And the book says: I’m happening. Deal with it. I’m happening right now. Just…hold on to something.

Space Opera, you may not be surprised to learn, was the second kind of book.

It’s a ridiculous book. I’m not even going to pretend it isn’t. I never had any intention of writing it. I was quite happily busy with other projects.

The trouble, in the end, always comes down to love. When I love something too much, it inevitably gets me into trouble.

In this case, what I loved was Eurovision.

I have spent a long time already in the trenches, explaining Eurovision to Americans. And now, I suspect, I’ll be doing it for the rest of my life. Here’s the short version: the Eurovision Song Contest is a combination of The Voice, Miss Universe, and WWI. Every year, countries in Europe, and these days, several that are decidedly not in Europe, send a pop singer or group to compete in a musical extravaganza for which the costumes are unspeakably glittery, the special effects tend toward gouts of flame, and the prize is really very little but the right to host the contest next year, and if one is lucky, a middling summer hit.

Viewers can vote from home alongside a panel of judges, but the key element is that you can’t vote for your own country, so Eurovision ends up being a glam rock snapshot of the current European political situation in any given year, as alliances come together. The whole point of it in the first place was to unify Europe again after WWII. It’s a bright mirrorball of pop art, but it’s got darkness at its heart.

I love Eurovision. I genuinely believe it’s one of the best things humanity has ever accomplished, and no that’s not a joke. When else has our species ever looked around and thought: we’ve just annihilated each other for a decade. The whole continent is a smoking ruin.You wanna…sing it out?

So two years ago, I was livetweeting it, as you do when you just get so excited at the mere thought of an event that has a bigger global audience than the Super Bowl but no one in your own country knows or cares about it. And one of my Twitter followers joked that hey, I love this weird, bright, dumb, showy thing so much, I should write an SFF version of it.

Do not dare me to do things on Twitter when I am in the middle of a Eurovision drinking contest. I simply cannot be held responsible for my actions in such a situation. Especially when an editor slides into my DMs and offers to buy that book right now.

My agent refers to it as the fastest deal in publishing. It was done and I was committed before I could catch a breath. As I was signing the contract, my fiance asked: “Does it really just say ‘Eurovision in space’? Do you actually have any idea how you’re gonna pull that off?”

And I didn’t. Part of me was terrified. How the hell do you even begin to write that? I mean, you can’t play it straight. It’s too absurd. It’s obviously a comedy. Ah, but if you try to write science fiction comedy, the ghost of Douglas Adams appears and asks you with a stern expression if that’s really necessary. And even if it was a comedy, the core of Eurovision is that political darkness and artistic light. You can’t play it totally camp, either. And given the politics all around me, I wasn’t sure I was actually up to singing it out just this minute. What had I agreed to?

But the deadline approached. And I sat down at a blank screen. I laughed nervously.

And then I stopped trying to worry about whether I could do this thing at all and wrote some shit about Enrico Fermi and I was off, and off at breakneck speed.

And that’s how Decibel Jones came to be.

Fast forward just a bit into our future, and Earth finally gets the alien invasion we always dreamed of. It didn’t go exactly as planned. It’s not about gunships and stern admirals and grim battles. There don’t seem to be any admirals at all. But there’s a whole teeming galaxy out there, and they’re extremely suspicious of us. They tore themselves to pieces a centruy ago during the Sentience Wars, and are thus very careful about newly-discovered species. They simply can’t afford any more monsters out there. And humans do have such monstrous habits. We’re a borderline case—we may be sentient, but given our behavior on our own planet recently and historically, we may simply be a particularly unpleasant invasive species.

Fortunately, they’ve got a way to sort this out. Mankind must compete in the Metagalactic Grand Prix, a contest of song and dance in which every sentient civilization performs its most staggering acts of punk rock beauty. All humanity has to do is not come in last, and we’ll be welcomed into the greater interstellar society with open arms.

If not, we’ll be quasi-painlessly exterminated, and Earth is welcome to try again in another million years with dolphins or something, no questions asked.

The trouble is, humans really are rubbish at music, comparatively. It’s embarrassing, honestly. They drew up a list of musicians they thought might have an outside chance at appealing to the finer sensibilities of non-primate cultures, but unfortunately, the Keshet, a race of time traveling red pandas in charge of intelligence gathering, fudged their landing a bit and everyone on the list is tragically dead. Except for one. Decibel Jones and the Absolute Zeroes, an early 2020s British glam-trash rock trio headed by a multi-ethnic genderfluid former glitter messiah who only ever managed one hit album when they were at the top of their game. But these days they’re aging into their 40s, a heap of bitterness, a lot of cheap wine and divorces, and particularly humiliating birthday party performances.

And now, they’re going to have to save the planet.

It’s as unlike what I usually write as it’s possible to get, and I’m so proud of it. I tried so hard with this book, you guys. I tried so hard to make it good enough for you. To pour my bitter, glittery, aging into my 40s on wine and divorces, dumb, hopeful, innocent, needy heart into a wormhole so it can fall out into your living rooms. To make you feel for a page the way Eurovision and Hitchhiker’s Guide and David Bowie and Prince and life on this stupid, terrible, gorgeous planet makes me feel. Even if it’s just one page.

Even if it’s just one paragraph.