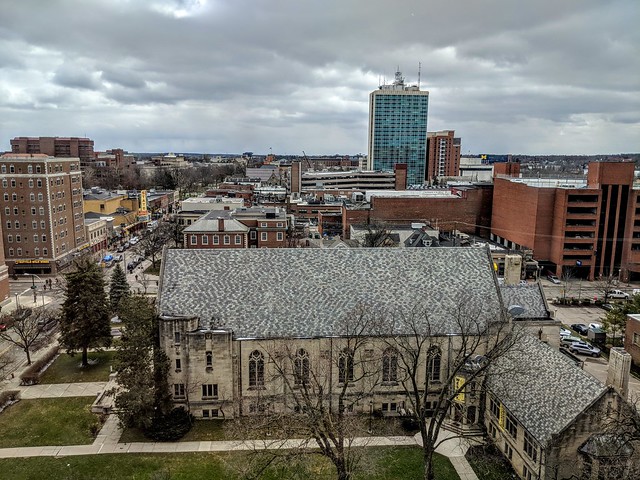 To start off my travels, I am on a high floor overlooking a church. However, the brick building at the right of a picture is a parking garage, so I think we’re in good shape in terms of the “where is the parking lot” aspect of my travel pictures.

Tonight: I am at the Literati Bookstore here in Ann Arbor, and everything starts at 7pm. If you’re in the area, come be the guinea pigs for the rest of the tour, and hear everything first!

Tomorrow: I will be in Iowa City, at the famed Prairie Lights bookstore, also at 7pm. If you live in or near Iowa City, come on down, and bring everyone you know!

Etc: I got an email from a reader who noted that Head On is my 13th novel (which is true, uuuh, I think) and wondered how a book release day is different now than it was when Old Man’s War, my first published novel, was released back in 2005, and if it’s still exciting 13 years on.

Well, some of the things that are different:

* Old Man’s War came out on January 1st, so Head On isn’t competing with a major holiday where most people stay at home watching football and/or nursing hangovers. So that’s a positive!

* I was at home for the Old Man’s War’s release, not only because it was New Years but because I wouldn’t do a book tour for a release until The Last Colony in 2007. I’ve toured with every new novel since Fuzzy Nation in 2011, which means that for the last seven years, I’m usually somewhere else when the book comes out; like, for example, Ann Arbor, where I am today. This is not a complaint, incidentally. I like touring my books and it’s a thing not every author gets to do. But it is different from when I started out — now when a book comes out, I’m on the road.

* I’m a lot less stressed about the book release, in terms of sales. When Old Man’s War came out I was constantly checking Amazon rankings and wondering how the sales were and so on. These days and for the last several books, I don’t really check online sales rankings. One, because I know that they’re not exactly indicative of actual unit sales, and two, because as I go along and I understand the dynamics of my own sales profile, there’s less reason for me to sweat my opening numbers. In terms of sales, I’m generally a marathoner, not a sprinter, a fact that’s useful for backlist and royalties. Knowing that makes me less anxious about my opening numbers. Don’t get me wrong, I like it when I’m up near the top of sales numbers; that’s always nice. But I’m not constantly pinging my Amazon rankings.

* Likewise I worry less over reviews. I like it when they’re positive — who doesn’t? — but I don’t worry too much when they’re, shall we say, less than glowing. Part of that is simply having been a pro critic myself and remembering how the sausage gets made, and another part is simply always having had something of a thick skin. But the other part — the part I grew into, shall we say — is realizing that with very rare exceptions, an occasional bad review doesn’t hurt a book. The example I give for this is Redshirts, which got two of my worst trade reviews ever from Publishers Weekly and Kirkus, but then went into the bestseller lists and won several awards including the Best Novel Hugo. Perhaps more accurately, if every review of a book is a negative one? There might be a problem. But the occasional pan that comes as part of a whole range of reviews? I don’t lose sleep over them, and they don’t bother me (or cause me to want to respond) as they might have when I was new out of the gate.

* What hasn’t changed is, simply, my fundamental excitement that something that started off in my brain is now out there in the world. And some people like it! And talk and think about it! And want more of it! I mean, how can that ever get old? It can’t. Well, I guess it could, but I’m glad it hasn’t for me. I still have what I think is the coolest job in the world. I felt that way in 2005, and I feel that way now. 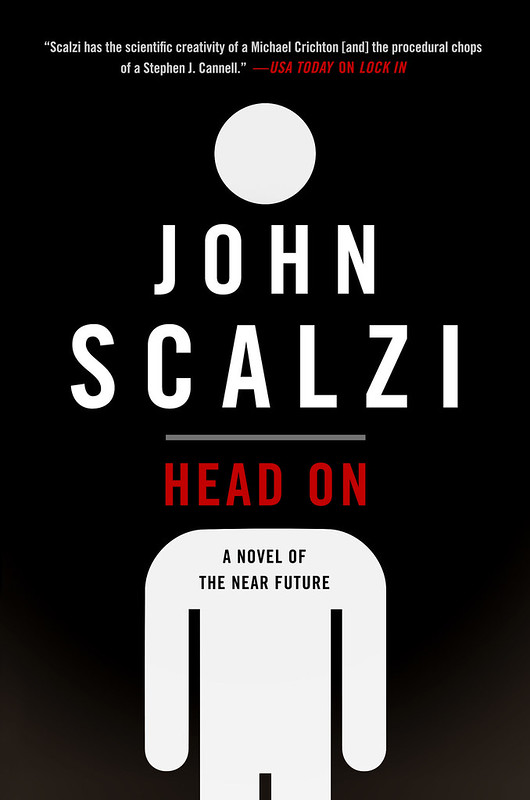 The day has arrived! Head On, the stand-alone sequel to Lock In, is now officially out in North America! (UK, you will have to wait two more days.) “Stand-alone sequel” means that although the book follows the characters and universe of Lock In, it’s been written so that it can be enjoyed even if you haven’t read that book. The book has been getting some of the best reviews of my career:

“[Scalzi’s] prose flows like a river… his characters are beautifully crafted; and his future world is impeccably designed, at the same time wildly imaginative and wholly plausible.” — Booklist (starred review)

And, well. That doesn’t suck.

How can you get this book?

Print: It’s available at your local independent bookstore, and Barnes and Noble and other chains, as well as through your favorite online retailers, including, of course, Amazon.

Audio: Available through Audible.com and in two(!) flavors: One narrated by Wil Wheaton, and the other by Amber Benson. They are both fantastic versions, you can’t go wrong with either (or both!).

“What if I want a signed copy?” I hear you ask? Well, there are several ways: One, Barnes & Noble has quite a few signed copies available. Two, Jay & Mary’s Book Center, my local bookstore, has a couple dozen signed copies on hand. Three, come see me on my book tour or order the book from one of the bookstores where I will be appearing; even if you’re not there in person I will sign and personalize your book for you.

Speaking of the book tour: Yes! I am on tour! Staring tonight in Ann Arbor, and then heading to Iowa City, Minneapolis, Los Angeles (for the LA Times Festival of Books), St. Louis, New York, Washington DC, and then back home to Troy, Ohio. At every stop aside from Los Angeles, I’ll be brand new work; in LA, I’ll be having an hourlong discussion with Wil Wheaton. I hope you’ll come see me on tour; it’s going to be fun.

Speaking of fun! Those of you who follow my works know that I frequently commission songs to tie into the release of my books. For Fuzzy Nation, I had Paul and Storm write one. For Redshirts, Jonathan Coulton. And for Lock In, former The Academy Is… and current solo artist William Beckett provided a fantastic song. For Head On, which is a stand-alone sequel to Lock In, I asked William to come back for another song. And because Head On features a massively popular new sport called “Hilketa,” I asked him for a song that would be at home in an arena, blasting out as fans are cheering and the players are coming out onto the field.

Did he deliver? Why, yes. Yes he did:

I hope you enjoy Head On. I had a blast thinking it up and putting it down into words. I hope you’ll have as much fun reading it.

See you on tour!