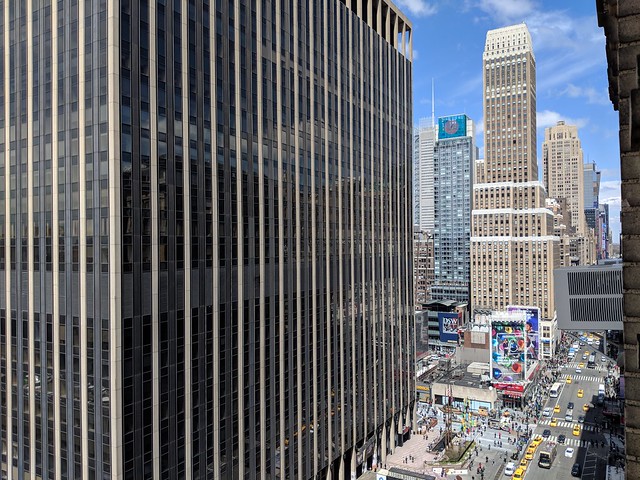 Actually more out the window, since I slipped the cell phone out the sill to get the street view. Hello, Manhattan!

Tonight: 7pm! The Strand! Come see me! Don’t let me be alone!

Tomorrow: I’m down in DC at the the Politics and Prose Wharf store. Also 7pm. Come see me in our nation’s capital! Bring everyone you know! 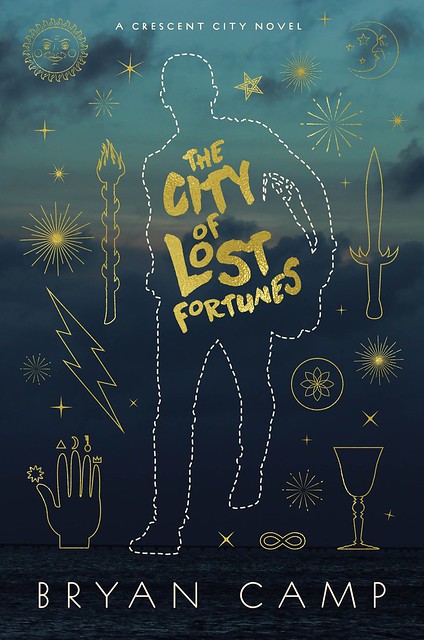 Luck is a thing that often happens (provided, of course, everything else falls into place). It happens enough that it caused Bryan Camp to consider its fundamental nature for The City of Lost Fortunes — in no small part because of the luck he’s had in his own life, and what it’s meant to him.

In the handful of days before Hurricane Katrina made landfall, when it was still a relatively weak storm in the lower half of the Gulf that was supposedly headed for Texas, I spent my time—when I wasn’t in class or working my usual shifts at a restaurant—packing up everything I owned and loading it into my truck. If you’re not familiar with hurricane evacuations, this isn’t normal preparedness.

Because there’s a “cone of uncertainty” about where a storm might actually go, you often spend a week watching satellite imagery and projected paths before it’s clear that any given storm will actually threaten your home. Usually, you’ve only got a day, maybe two, between making the decision to leave (if you’ve got the means) and needing to be on the road. Since you might be within that cone of uncertainty as many as four or five times in a given hurricane season, people don’t tend to pack up their whole lives every time. Most people here keep a single box of all their “absolutely must not lose this,” paperwork to bring with them, along with valuables, pets, a few changes of clothing, and maybe a few precious pictures taken off the wall.

I don’t imagine a single person evacuates without realizing they’ve left something behind that they wished they hadn’t forgotten. But I had every single possession I owned carefully boxed and labeled, ready to go a full day before the storm even started to strengthen. I didn’t have some prescient warning about the danger the storm posed, nor am I an overly cautious person by nature who does this for every storm. In truth, I was barely aware of Katrina until it started to get suddenly, scarily strong.

So why, then, did I pack up everything I owned? Because I was broke. That weekend, I just so happened to be moving out of the house I shared with a few friends and back in with my folks to save rent money.

Blind, dumb luck, in other words.

My life has been full of those kinds of moments. Missing an author’s reading and, instead, lucking into a date with the woman I would one day marry. Switching jobs right before a round of layoffs. A font size mishap forcing me to submit one story instead of another. Lucky break after lucky break that starts to look like destiny, like this is the trajectory my life is “supposed” to be on.

Because they’re two sides of the same coin, aren’t they? A flat tire is bad luck, but a flat tire that avoids a car accident is all part of the plan. I thought about this relationship a lot after the storm and in the years that followed, as I wrote and rewrote this novel about the life and death of a Fortune god. Yes, it’s a murder mystery, and yes, it’s about loss and recovery and finding oneself in the wake of tragedy, but the question at the core of this book is whether we live in a chaotic world of blind luck, or whether all that seeming randomness comes together as part of some grand design, if it all happens for a reason.

The easy answer, of course, is that it’s impossible to know for sure. The deeper, harder to swallow conclusion that I came to, though, is that luck or destiny or fortune or whatever you want to call it, is both real, and is a non-renewable resource. It’s not just wealth and it’s not just privilege, though those things are certainly tied up in all this. For many, it’s both of those and even more besides. The simple, maddening, unfair truth of life is that it’s just straight up easier for some people.

In that little anecdote about my pre-Katrina stroke of good fortune, for example, I was able to pack up all my possessions on my own without it impacting my work or my studies because, in part, I am able-bodied. I had the support of my middle-class family to fall back on when rent became burdensome. We had the means to evacuate, which many here did not and still do not, and the means to return once the storm passed, while some life-long residents of New Orleans will never come home. I was, and am, lucky.

When the good things in your life look like luck to you, it’s relatively easy to spread that good fortune around. But one doesn’t need to look very hard at this world to find examples of those who see their excess of fortune as predestined. They turn a blind eye to all the ways the machinery of the world is greased in their favor, and look only to the results. “Look,” they say, “at all the blessings the universe has bestowed on me. Surely this is mine because I deserve it.”

Trickster stories are my favorite fables and myths, not because they depict figures really worth emulating, but because Tricksters perform a very specific, necessary task in the wider world: they upset the balance. They trip up the mighty and, as the once overly-fortunate tumble down from that lofty perch, steal a little of that good luck for themselves and others (usually for themselves, but hey, nobody’s perfect).

And so I look at this world of ours, with a very few people hoarding so much of the easy living that it makes life just that much harder for the rest of us, and I long for Trickster. Someone who can show the ones who believe that destiny has granted them dominion over the Earth that, no, mostly they’re just lucky.

Because I’ve had a little taste of what good fortune is really like, and I’m here to tell you folks, it really is better to be lucky than good.