Not everything has to be cool. Coolness is overrated.

(who is also correct, by the way) https://t.co/2TRZXUBWUF

I have achieved my greatest successes and most significant happiness by pursuing my own idiosyncratic passions. It's so freeing.

When we meet, have me tell you my theory of coolness and why some people, no matter how awesome, will never be cool (and that's okay).

And it sounds like Kaci doesn’t want to wait, which is reasonable inasmuch as she probably wouldn’t be in the room for a private conversation between me and Alyssa anyway. So, fine, here is my theory on “cool” and why some people will never be cool. And to explain it, let me use a couple of examples, namely, me and my wife Kristine. 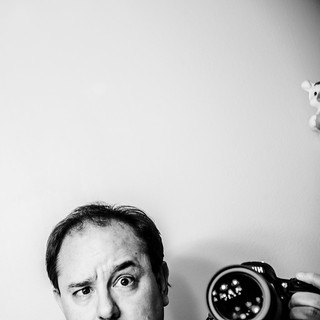 I am, to put it bluntly, not cool. This does not mean that I am not (or at least could not be) a good person, or a nice person, or a person that people are interested in meeting, or someone who is creative or does interesting stuff, and so on. What it means is, when I meet people, I generally want them to like me. I like to be liked. This aspect of my personality means I expend time and effort and energy to find the ways and means to help people decide if they want to like me. It doesn’t always work (and sometimes I decide I don’t want to like someone), but generally it does; I’m mostly likeable, and by now I’m pretty good at reading people. But the point is, there’s a flow of conversational and personality energy coming out from me, hoping to draw the other person in, to help create a space we can both be comfortable in, and maybe even be friends together. 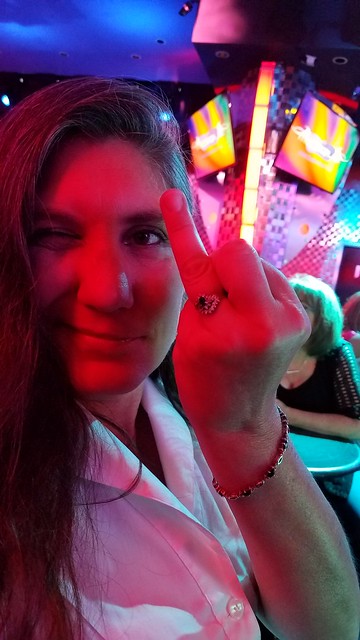 Krissy also generally likes to be liked; who doesn’t? But the thing about Krissy is that she’s perfectly fine if you don’t like her, either, and her particular personality means she doesn’t worry about either condition. She is a lovely and wonderful and delightful person, and also, she’s pretty much entirely self-contained. Your approbation or opprobation is neither here nor there to her. As a result, she doesn’t send out a lot of energy when you meet her initially. Energy and effort goes to her, rather then from her, and then depending on what she decides, you get to be friends with her, or not. She’s never less than polite and kind and correct with people; I’ve never known her to be cruel or standoffish, unless someone richly deserved it. But fundamentally she’s a person people want to impress, rather than the person trying to impress people. In other words: she’s cool.

“That’s just the difference between an introvert and an extrovert!” I hear some of you say. Well, no. As it happens, I’m the actual introvert in the family, and Krissy is the actual extrovert. I put out energy and effort despite eventually wanting to withdraw from people and recharge in my room; Krissy draws people in and then once they’re in her circle of friends, she’s ready to party. I think there may be some correlation between introversion and coolness (shyness can be confused with coolness, for example), and extroversion with not-coolness, but it’s not one to one.

Indeed we can come up with lots of reasons why people are cool or not cool, but I’m not sure that any one of them is a constant. People who are beautiful seem to automatically go to the head of the line in terms of coolness, as an example, but I know lots of people who I think are gorgeous who are also deeply not-cool in their personalities, and vice-versa. Some creative people I know are cool; many are not. Some people would say “coolness is confidence” but anecdotally I don’t think anyone would say of me that I’m not confident, and yet I don’t consider myself cool at all. Most nerds are really not cool, and yet I can think of a few who totally are. And so on.

Also, and to be clear: Coolness, or lack thereof, is not a value judgment. Some awesome people and things are not in the least bit cool; some real trash is found under the “cool” umbrella. I do think at least some of the valorization of “coolness” comes from the simple fact that most people and things aren’t in fact genuinely cool. Most people like to be liked; in situations where people feel comfortable, and on their own terms, they send out energy to others and hope to draw others in. Likewise, most creative things in the stream of commerce aren’t meant to be difficult to approach; they’re made, bluntly, to sell, to someone. At the end of the day, something that is “cool” or not is neither here nor there to its value (and its value to you), and cool people are still people and you can like them or not, depending.

Now, here’s a couple of caveats to the “coolness” thing. The first is that “cool” is obviously very often shorthand for “a person or thing or action I like and/or admire,” as in “I love that dude, he’s so cool” or “That movie was really cool” or “That was a cool thing you did.” If you’re using “cool” that way — and pretty much everyone does — I’m not going to argue with you about it. The ridiculous fungibility of the English language means things can be “hot,” “cool,” “bad,” “good,” and “sick” simultaneously, and all meant positively, even when those words (again, obviously) have their own separate meanings in different contexts, and shades of difference in this one. When I’m talking about “cool” and “not cool” I’m scaling it down to a very specific context (and also, I should note I’m making a qualitative distinction between “not cool” and “uncool,” the latter of which has specific negative connotations, and while I’m at it, between “not cool” and “warm,” the latter of which has its own positive connotations. Wow, my philosophy of language training is getting a workout today).

The second caveat is that not-cool people and things can have situational coolness thrust upon them. I am by no stretch a cool person, but in events like readings and signings and appearances, I get to be a temporarily cool person, because lots of energy is being directed at me by people who have come to see me, and the dynamic of the event is that I can’t really return the energy in kind.

The coolness generally dissipates the moment I’m off the clock, thank God, because I’m not actually famous and thus am not cursed to be recognized everywhere I go. That sort of coolness is performative and I can’t imagine having to perform it all the time. It’s difficult for not-cool people to be cool on a regular basis. It’s like ill-fitting shoes. I imagine for cool people the opposite is true — being in a situation where they would have to send out energy all the time to other people would be exhausting. 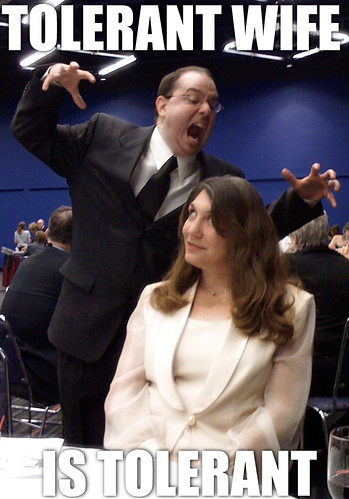 I like that my wife is cool; from a sociological point of view it’s been fascinating for me to watch people react to her over the last quarter century. I imagine that she feels the same way about me, watching me do my thing with people as I get to know them, and they me. I think as a couple we make a pretty good team because we are content to be who we are. I like my not-cool self. And I enjoy trying on a daily basis to get my super-cool wife to decide to like me. It’s fun. And so far, so good.

(There is still time to ask a question for Reader Request Week! Go here for all the details, and to ask your question.)