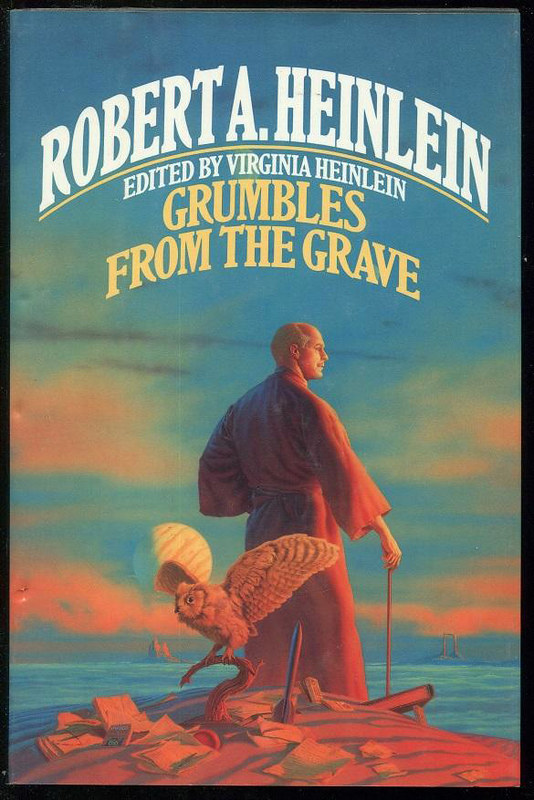 Here’s a question sure to be fun for everyone! Gottacook asks:

Does it seem to you that consciousness of Robert Heinlein as a singularly influential SF writer has precipitously faded in the past several years? (Not that this would be a surprise, as the 30th anniversary of his death is next week.)

Well, and I think you pretty much answered your own question, there, Gottacook. Heinlein passed away 30 years ago yesterday, his last book was published the year before that, and his three most critically and culturally significant works (Starship Troopers, Stranger in a Strange Land and The Moon is a Harsh Mistress) were published 59, 57 and 52 years ago, respectively. That’s a lot of time passed, even for a giant of the field. It’s also a lot of time passed for the people who read him when the works originally came out. Realistically, someone who read Troopers and Stranger when they were fresh are in their 70s (or late 60s at the most precocious). I read Friday, which I consider Heinlein’s last major work, when it came out, when I was 13. I’ll be 49 tomorrow.

Which is not to say that people don’t still read Heinlein, obviously. He’s still very much read and recommended, and he’s also taught, which is a non-trivial thing for the longevity of a novel. And science fiction, for better or worse, is a genre and fandom which traditionally has set great store in reading the classics. Finally, some works get rediscovered, or time catches up to them — Philip K Dick is more widely read and regarded than he was when he died in 1982 — and there’s certainly no reason this can’t happen for Heinlein, either. The Trump years have caused some Heinlein fans to mutter about Nehemiah Scudder. So, and to be clear, I don’t think Heinlein is going to disappear. That seems highly unlikely.

But the question wasn’t whether Heinlein is going to disappear; it’s whether he’s declined as an influence. I think it’s fair to say he has, if for no other reason than that in the last 30 years, the scene in SF/F has changed. For one thing, fantasy and fantasy writers are much more influential in the field and on emerging writers than they were when Heinlein was alive; there’s an entire generation now edging into their 30s who grew up at Hogwarts, and for whom people like Robert Jordan (with an assist from Brandon Sanderson) and George RR Martin loom large in their landscape. Over on the SF side William Gibson, Neal Stephenson and Lois McMaster Bujold (not to mention Suzanne Collins) are much nearer influences, to name just three.

Also, as hinted above, YA authors are much more significant influences now than they were three decades ago. I can’t tell you how many younger authors count people like Tamora Pierce and Scott Westerfeld as significant in their development, and why wouldn’t they? And, yes, Heinlein wrote juvies, but the fact he wrote them is not the same as them currently being widely read and being influential. They’re not, which is not entirely surprising, as almost all of them are now sixty years old and the world they were written in doesn’t exist any more.

Aside from this is the fact that science fiction and fantasy, as a general field, is more diverse in terms of writers than it ever has been before, and that changes the calculus on who are rising and who are waning influences. Right now, it’s more likely that for non-male, non-white, non-straight writers, people like Octavia Butler and Ursula K. LeGuin are more significant and formative influences than Heinlein (or Asimov, or Clarke, who was not straight but who wasn’t exactly out about that). And again, why wouldn’t that be the case? This certainly isn’t a bad thing for science fiction and fantasy to have a new generation of creators whose influences are not the same small pantheon of writers.

Every writer comes with their own set of influences; every generation of writers has their general pantheon. And yes, Heinlein and Clarke and Asimov and etc were and are titans. But remember that the titans were overthrown by newer gods — and that those gods themselves were supplanted over time. No influence lasts forever. If you’re lucky then you get become an influence on an influence, and younger readers (who then become writers) work their way back to you.

But I don’t want Heinlein to be an influence to an influence! I want him to remain relevant now and forever exactly as he always was! Well, fine. Then the answer is to get him heavily back into film and television. Heinlein purists like to grouch about Paul Verhoeven’s insufficiently respectful 1997 film adaptation of Starship Troopers (which, to be fair, is a perfectly reasonable position to take; I love the film but take the position that it coincidentally has the same title as the novel), but I would argue it likely bought Heinlein another decade in the common cultural consciousness. It certainly helped sales of that novel, and likely several others. If an HBOesque take on Stranger in a Strange Land ever manages to get off the ground (and it, too, would almost certainly need to be heavily adapted for modern audiences), you would see that novel and Heinlein come roaring back. Because Heinlein would be new to a whole new audience, for whom he had otherwise always been dead.

Which I would be fine with! As almost all of you know, Heinlein was a direct influence on me and my writing; it’s not for nothing that for years my elevator pitch of Old Man’s War was “Starship Troopers with old people,” and why I freely credited his influence on that book, and on me as a writer, in OMW’s acknowledgements. But I would warn old-line Heinlein fans that even if there’s suddenly a new legion of fans, they won’t like, love, or look at Heinlein the way you did. Coming to Heinlein at 20 in 2018 (or later) is a hugely different thing than coming to him at 20 in 1968, particularly if you’re not a white straight dude. Especially later Heinlein. I mean, come on, people. Time Enough For Love is one of my favorite books of his, but the protagonist’s literal motherfucking is still a squick and a half, and the fact Heinlein keeps it up for another few books? Yeah, that’s not something the kids are gonna let slide.

Which I am also fine with! If you actually want a writer to remain relevant, you have to accept that every reader and every generation is going to take that writer on their own terms. Heinlein can’t be the same influence that he was 30 or 50 or (yes) 80 years ago. New readers are going to accept some things, reject others, and approach still other things in a new way. Hell, this has already happened; in the 60s and early 70s, Heinlein was considered by the hippies to be something of a free love spiritual guru and Stranger in a Strange Land was the holiest of the Heinlein texts. For the last couple of decades, the libertarians have clutched Heinlein to their bosoms and don’t seem to have much time for anything other than Starship Troopers and The Moon Is a Harsh Mistress (with the occasional longing glance at Farnham’s Freehold). Who is to say that in another decade, I Will Fear No Evil won’t be looked upon as an ur-text of gender fluidity and early Heinlein — you know, the one that was all for Social Credit — won’t all be the rage?  The street will find its own uses for Heinlein, if they find a use for him at all.

But, yes, if you want Heinlein still in the conversation: Get him on the screen, and do it regularly. Short of that, it’s likely that Heinlein — like most writers, no matter how significant and important they were in their own time, and Heinlein certainly was, and for a fair amount of time afterward — will continue to fade and diminish as a direct influence on new writers. There will always be a place for Heinlein at the grand table of Science Fiction and Fantasy, to be sure. It’s just that this place will be further and further away from where at the table the actual conversation is going on.