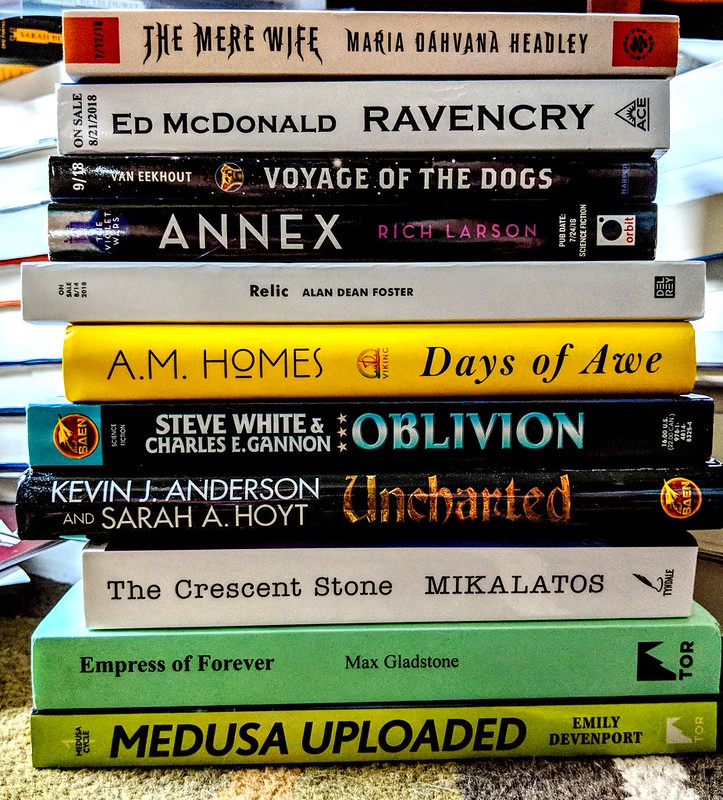 Another Friday, another tasty stack of new books and ARCs that have come to the Scalzi Compound. I see some very fine work in this one — what here is catching your attention? Share your thoughts in the comments! 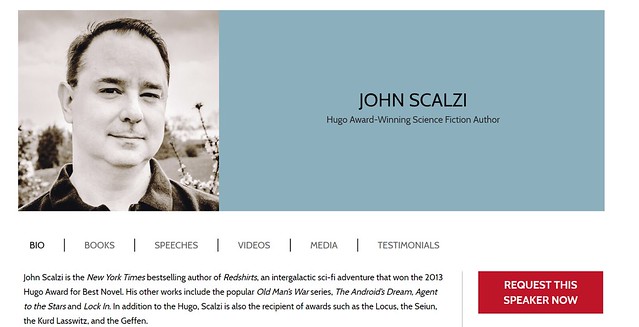 I’m curious about your ‘public speaking’ role. I know you have representation and are available for events. I would like to know things like what advice do you have for other folk who don’t do much public speaking? Do you have any formal training? Why should somebody pay to hear you speak? What’s the difference between writing your own speech and hiring a speechwriter? Have you ever written somebody else’s speech? Do you write out your entire presentation or just have an outline?

So, let’s go through some of this quickly and some of it less so.

Yes, I do have representation for public speaking; I’m represented by the Macmillan Speaker’s Bureau (which makes a little bit of sense as Tor, my primary publisher, is a Macmillan imprint) and indeed I am available for events. I don’t have any formal training, I’ve just ended up talking in public a lot and now have been doing it in a professional sense for coming on two decades. The difference between writing one’s own speech and hiring a speechwriter is that I don’t charge myself when I write something for me to say. I’ve written presentations and speeches for other people, sure, but not enough that I would put it on my resume. At events I will occasionally read prepared work, and occasionally work from an outline, and occasionally just get up on a stage and start talking.

As for why someone should pay to hear me speak, well, there are two ways to answer this question.

The first is, hey, when I speak, I’m fairly entertaining. People pay for other forms of entertainment, including books, movies, concerts and other live events. So, why not speaking as well? And certainly authors have done very well with speaking tours over the years, and not just recently. Dickens made a tidy sum on his speaking tours, which was good for him because in the US at the time his books were rampantly pirated. Twain would go on speaking tours when his investments tanked and he needed money. They were by all accounts quite entertaining evenings.

Indeed, there are some authors for whom the books aren’t their major profit center; the speaking tours and events are. The books are their calling cards and the way to help keep their live acts current. Political commentators and downtime politicians are especially likely to punt out a book and then take their act on the rubber chicken circuit, with the speeches and appearances earning them more over a year than they got for the book advance (also, many of these folks have as a rider that a certain number of books must be bought by the organization fronting the event, so it’s a handy way of clearing inventory as well). Sports figures, tech gurus, business wizards and lifestyle advisors also pull this trick — and it’s a pretty nice trick if you can manage it, and either like or at least can tolerate blathering at a hotel lectern for your living.

Note that who pays to have you speak will vary. Most of my paid speaking engagements are for organizations who pay my asking fee; the individuals who come to see me speak generally don’t have to pay (or don’t have to pay extra, if they are at an event that had an entrance fee). Other authors I know set a fee with an organization, which will then turn around and sell individual tickets to an event in the hopes of making a profit over the appearance fee, but generally speaking you have to be a pretty well-known and/or beloved author to pull that one off, and at least for the moment I don’t appear to be that well-known, or (alas) that beloved.

The second reason for why someone should pay to hear me speak is somewhat more transactional, and that is: Because I should be paid for my time. A speaking event isn’t just about the hour (or so) I’m on stage and then the hour to two hours (or so) that I’m signing books. It’s also about the time to the airport, the time on the plane, the time in car from the airport, the time in the hotel, the time meeting with the event organizers and/or the time spent socializing at the pre-event gathering, and back to the hotel, car, plane and the return home. It’s also time I’m not at home, with my wife and child and pets. It’s also time I’m not with friends, or elsewise doing another thing with my time. It’s also generally time taken away from writing, which is, you may, remember, my main gig and the reason people want to see me live in the first place.

As this is all the case, the question is: How much is all that time, and time away, worth to me? The answer is: a fair amount, actually, and that amount is reflected in my speaking and appearance fee. I don’t feel guilty about making that determination of the value of my time, since as I’ve noted before that this is all the time I will ever have in this universe and therefore I should in fact have a good grasp on what my time is worth and expect people to understand that. Also, you know. If you don’t want to pay my fee, then don’t; I’ll stay at home, and happily so.

So, you may ask, is every appearance I do paid for in this manner? Not all of them. Book tour events are handled differently, as are most conventions I attend. I’m on staff for the JoCo Cruise. At this point, however, I don’t do events that end up costing me money to be at, and I don’t do events where I don’t think there’s a blunt transactional benefit to my being there. The only exceptions to this are events I’m attending like a fan, i.e., I’m going to hang out with friends and see people I like. In those cases I pay to show up like anyone else. But if I’m on the clock? Yeah, it has to be worth my time, and also, I’m the one who decides what is worth my time and what is not.

(Also, yes: High-class problems to have! On the other hand, high-class problems are still problems. And also, if you’re a fan of my books, ask yourself whether you want me to spend more time talking, or more time writing. If it’s the latter, then I suspect you might appreciate me making it clear to people who want me to show up to places that my time is valuable.)

In terms of advice for public speaking, the first thing I would say is that if it’s something you don’t enjoy, don’t do it — you won’t be happy, which means that no one else will be happy, either. There are other ways to promote yourself. Find one you like. Beyond that, just prepare: know how much time you have to fill, know what the expectations are for your presentation, do a few run-throughs of your material before you get up on the stage. And then after that, don’t panic — it will work or not. If it works, great! If not, you’ll know better for next time. If you want more details than this, here you go.

I personally like speaking in public and also I don’t get nervous in front of crowds, so most of the time it’s fun for me, which is pretty great, considering how much of it I do. Hopefully I’ll keep getting paid to do it. But if that ever stops happening, well. I still have my day job, I suppose.