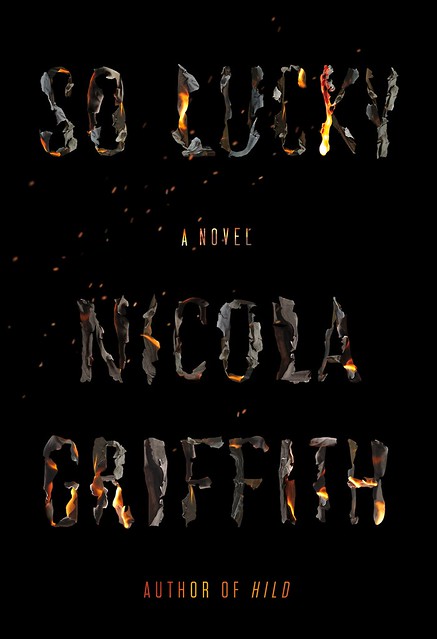 Ever have that story that decides that now is the time it is going to be told, and you get to be the lucky person to tell it? Nicola Griffith does, and now her novel So Lucky is out in the world. Here she is to explain how the one led to the other.

I usually know years in advance what book I’m going to write next. But sometimes when you’re far away and thinking of something else a book will leap out from behind the sofa and shriek, SURPRISE! Then look hurt when you’re beating it about the head and yelling, Don’t. Ever. Do. That. Again!

That’s what happened with So Lucky.

In mid-2016 I was happily working on Menewood, the sequel to Hild, when I got accepted as a doctoral candidate. It was an amazing opportunity so I went for it. I had to set aside Menewood because though I’m guessing some people could write a huge book set in the 7th century and a PhD at the same time, I’m not one of them. But I worked fast and by mid-December I had a draft of my thesis. I sent it to my supervisor, who would get back to me in January.

So now I had three weeks with no pressing project and no one nagging me for stuff. I know! I thought. (Be wary, very wary of that phrase…) I’ll write that magic realist story… It was a story I’d been thinking about for 20 years—and had tried to write once but stuck in a drawer because I wasn’t happy with it. (I didn’t know why at the time but it turns out I’d committed the cardinal sin of writing a disabled character as a narrative prosthesis. And, yes, this inconvenient knowledge is the kind of thing a PhD is good for.) But it had never stopped muttering to itself on the porch, and now it was hammering at the door…

…Or maybe I’m just telling myself a story; writers do that. You should probably never believe anything we say about why and how we write what we do. We don’t really know—but we’re really good at coming up with an explanation after the fact. So it could be that the whole thing was just nested avoidance behaviour. Maybe the PhD was a way to stop thinking about Menewood, and maybe So Lucky was a way to stop thinking about the PhD.

Anyway, I began. It came gushing, roaring out, a torrent of rage, joy, horror, and homecoming. I had a first draft in three weeks. And it turned out unlike anything I’ve ever written before.

The first word of So Lucky is It, and It is a monster. The book’s short but it’s stuffed with monsters, human and otherwise. None of those monsters is metaphorical.

So Lucky is set in present-day Atlanta. It’s narrated by a woman, Mara, who is diagnosed with multiple sclerosis and realises she needs a community—other disabled people—that doesn’t exist yet. It’s about how she finds her people and then begins to discover and help shape a new culture.

“I need it, so I’ll have to build it” is what the SFF community has been doing for decades. It’s where the queer community began in the 60s, and the feminist community in the 70s. Both accelerated in the 80s. The HIV+ community did it in the 80s and 90s. The disabled community are doing right now.

Having no established community to lean on in times of need is terrible; it is alienating, Othering, and enraging. But finally finding your people and beginning to create a life, a history, a path, plan, and sense of purpose together? That is blazing joy. So few people get to be part of the building blocks of a culture. So many of us are born into a sense of belonging and history, and never get to really find out our own perspective on the world. We might change part of the way through our lives, but, generally speaking, any path we may follow is already well-trodden, ready-made and lined with relevant music, books, films, fashions, and documentary history.

But when you get to build the art and culture that doesn’t already exist, the art you create is fuelled by the emotional journey: the alienation and the homecoming, the fear and excitement, the rage and joy. That’s how I wanted Mara, and the reader, to feel. I want So Lucky to be terrifying, bewildering, yet rich with the delight of discovery, of making, of connection; the warmth of belonging and building your own hearth—but with a thread of dissonance running beneath, the sense that the world you’re conjuring is fragile, and that monsters lurk just outside the light.

So Lucky is raw, a spear-thrust of a book, but also, I hope, funny. At least I read the audiobook that at way. It’s fiction about a woman who comes to see clearly the bullshit of the uber-story, the ableist lies we’ve all been fed from birth. She learns to break free from the constraints of the old story so she can build her own. It’s about building community. Because community is hope, community is life. And community is how you keep the monsters at bay.