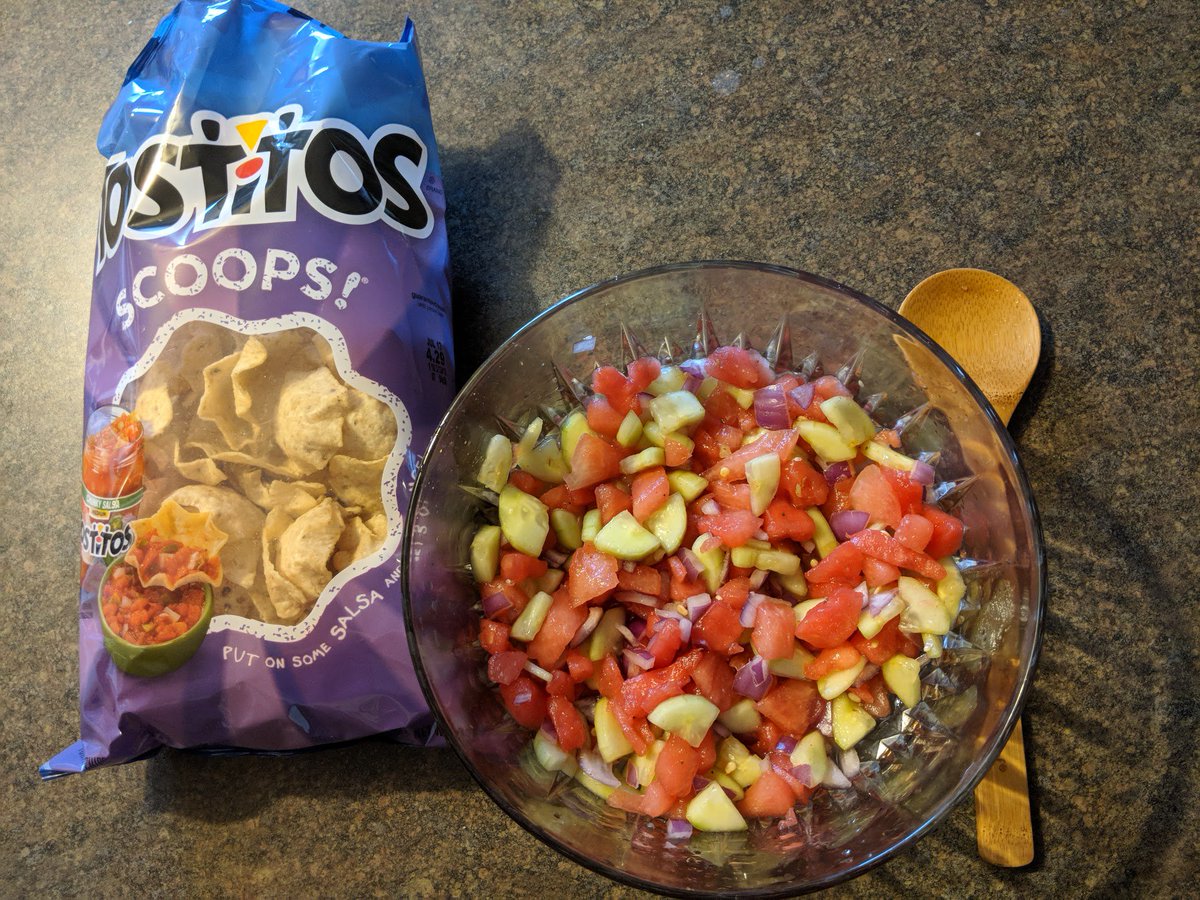 Hey guys! To kick off day two of writing on Whatever, I have decided to post a recipe. There were a surprising number of people in the comments of yesterday’s post that said they were looking forward to seeing what I make in the kitchen, and I was planning to make something today anyways, so I figured I might as well post it!

This past winter was, like, the longest winter I’ve ever lived through. I forgot for a second what in-season fruit tasted like. But now that summer is finally here, I bought a watermelon! I have never bought one before now, so that was an enthralling experience.

There a ton of recipes online for watermelon salsa, and while they are all unique in their own ways, they are all basically composed of the same few ingredients, which is watermelon, cucumber, red onion, and mango. Using my collective knowledge of these recipes, I just went for it and threw it together in a bowl.

Here’s what I used:

Juice of one lime

So yeah, just throw all that together in a bowl and mix! Originally, I also had a mango I was going to use, but I had never bought a mango before today and apparently the one I bought was very very not ripe. So instead I added a little bit of mango flavored white balsamic vinegar, but I really wish there were actual chunks of mango in this bad boy. I think the sweetness of the mango would’ve been a great addition, as well as added some awesome color.

As for the cayenne pepper, just add as much as you want! Originally, I wasn’t even going to put any in because I’m a weakling in the ways of spice, but it seems like most other people in this household likes a kick to their food, so I just sprinkled a good amount in and hoped I wouldn’t die later.

Okay, so, about cost. From the store, I bought a watermelon, a mango, two limes (you only need one, though), a red onion, and a cucumber. I already had the garlic salt and cayenne pepper at home. All together, the produce cost $8.86 (this is including the mango I ended up not using). The most expensive thing was the watermelon, which was five bucks for a whole seedless one. Cost is very important to me. Food prices add up quickly, especially in recipes where you have none of the ingredients at home and have to go out and buy literally everything on the list.

If you end up making this, send me a picture on Twitter (@ascalzi98)! I would love to see if y’all end up adding anything, like the mango, or whatever else you think would be good in it! Hope you enjoy this summery and fresh salsa!

I’ve had a couple of people ask me how the European Union’s new General Data Protection Regulation law (which goes into effect on Friday) affects this site and how I run it, so, let me talk about that very briefly.

One, on a personal level, aside from asking for an email address in order to leave comments here, I personally am not (and never have been) collecting any information about anyone, other in the very general sense of reading and comprehending whatever bits of personal information people leave in their comments. That said, I don’t do anything commercial with any of that — I don’t mine my comment threads for personal data, and certainly don’t comb through them for sales, advertising or other commercial purposes. It’s not that kind of site, and I’m really not that interested. Doing any of that requires work and effort that I have no desire to do. All I want to do here is write and post pictures. Aside from occasionally letting you know when I have a new book out, I have no interest in monetizing the site, nor anyone who visits it, nor any of the data they leave behind. Hell, I don’t even have sales affiliate links on Big Idea posts.

Two, while I personally don’t retain any personal information about you, WordPress, who hosts this blog via its VIP service, does (for example, if you do comment here, I’m pretty sure WordPress leaves a cookie in your browser so you don’t have to enter your personal information each time you decide to comment). WordPress tells me via its VIP service blog that it is currently reworking its infrastructure so that its services comply with the GDPR; inasmuch as WordPress’ VIP service constitutes the technological infrastructure of this site, I expect that how it handles your data, cookies, etc will now conform to EU law. Which is nice! Less work for me. Nevertheless I’ll be doublechecking to see if there’s anything else I need to be doing personally. I’m pretty sure there’s not, but it doesn’t hurt to be sure.

(For those of you asking why I’m even concerned about this at all, since I and the site are in the US, the short answer is that, as I understand it, the law covers EU citizens, and on any given day roughly 20% of the traffic here is from the EU. Likewise I’m pretty sure WordPress has users and offices in the EU.)

The short(er) version of this is that I don’t expect anything obvious will change here in terms of how either you or I use the site, and what things will change will be handled mostly in the background by WordPress itself, and generally speaking Whatever (and I) will continue not using any information you do provide here for any commercial purpose.

Basically, we’ll just keep on doing what we’re already doing here. If any of that changes in any significant way, I will let you know.