Hello, everyone! Today I’d like to introduce you to some songs I really enjoy, by an artist named Sam Tinnesz. I have composed a little playlist of my five personal favorite songs of his. His music is dark, intense, ominous, melodic, honestly almost hypnotizing, and I hope you enjoy it as much as I do.

The first song I ever heard by him was “Play With Fire”. It is also my favorite of his. Figured we should start off strong! This is the only song of his I have heard that has a female voice in it alongside his. I think the main reason it is my favorite is because it was the first one I heard, and the only one of his I listened to for a good while before I decided to give his other stuff a try. “Play With Fire” has a killer rhythm, a powerful chorus, a dark edge to it, and great lyrics.

If you’re wondering how I found this song, I got it from this amazing Black Butler (my favorite anime) edit:

The second song I have chosen is called “Heart of the Darkness”. This one is much calmer, more melodic sounding, and not as intense. One downside to it is that it is pretty repetitive, but if you’re looking for a song that is easy to learn the lyrics to, that probably won’t bother you. I think this particular song really showcases his voice more so than some of the others, though he doesn’t have a crazy range to begin with, I still find it pleasant.

For the third song, I’ve chosen one that is a little more similar to “Play With Fire”, as it is more upbeat than “Heart of the Darkness”. It is called “Legends Are Made”, and I really like the lyrics in this one. I can see this one being played in the background of a movie during a pre-battle scene.

For the fourth song, I chose “Bloody City”. If you liked the dark edge in “Play With Fire”, you will love how ominous and creepy this one is. The occasional spooky sound in the background mixed with the rhythmic music is seriously awesome and somewhat chilling. The lyrics don’t flow amazingly well, which is why this is number four on the list.

Okay, last one! For the fifth and final piece, I chose something that sounds completely different from the other four. The tone of this one is so much softer, slower, and has almost none of the same elements as the previous four. This one is called “Hold On For Your Life”. I find this one to be somewhat depressing sounding, it honestly made me tear up a little bit because I imagined it being put to a heartfelt death scene in a movie. The main instrument in “Hold On For Your Life” is a piano, which differs greatly from most of his other songs. It is very beautiful and emotion-inducing, in my opinion, but also has that same issue of being slightly too repetitive.

So, there you have it! Those are my top five picks from Sam Tinnesz. If you enjoy any of these or find other songs by him you like, leave a comment! Hope you enjoyed listening to these and also hope you have a great day! 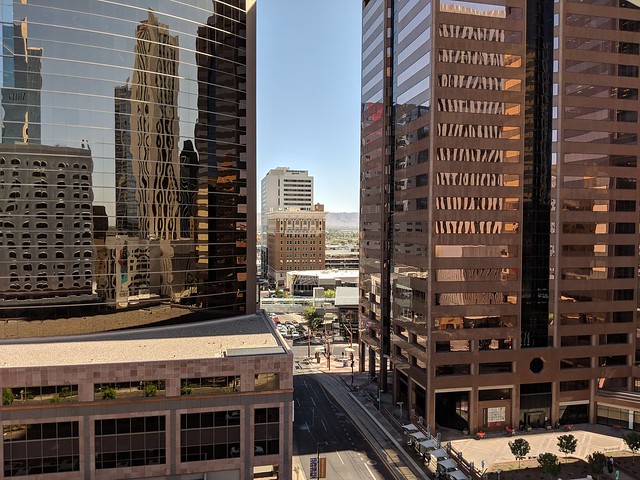 There is a parking lot below the building at the front, but I decided not to feature it in the photo. Hey! Not every “view from a hotel window” photo has to have a parking lot.

Reminder to everyone here in the Phoenix area that tonight at 7 I will be at the Poisoned Pen, along with many many other authors, signing books, and tomorrow through Sunday I’ll be at Phoenix Comic Fest, doing panels, signing books and generally hanging about. Come see me at one or the other.

As a reminder, starting today(!) I will be in the lovely and very hot town of Phoenix for Phoenix Comic Fest (previously known as Phoenix Comic Con), to sign books, be on panels and do a whole lot of schmoozing. And you(!) can be a part of that, if you happen to be in or around Phoenix this weekend.

(All this information taken from Tor.com’s PCF schedule, which also features the schedule of other Tor-related authors, like VE Schwab, Cory Doctorow and Myke Cole among others.)

I’ll note that on Sunday, at my solo panel, I’ll likely be reading new material that I’ve not read anywhere else yet, so if that’s a thing you want to hear, get yourself there.

See you in Phoenix! Uh, unless I don’t, in which case have a good rest of your week anyway, okay?