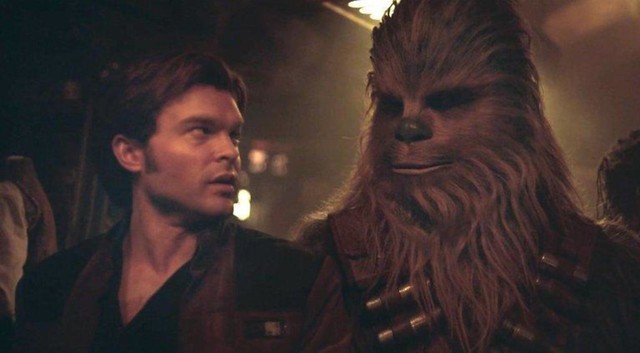 Yesterday I went with my mom and grandma to the movies and saw Solo: A Star Wars Story. Personally, I have always felt very disconnected from Star Wars as a whole. Even though I grew up in and still am part of the science fiction community, I have never seen the original six Star Wars movies, only the new ones (The Force Awakens, Rogue One, The Last Jedi, and Solo). I also never watched any of the animated series or played any of the games, except for the very beginning of LEGO Star Wars for the Wii when I was like twelve.

Given all this information, you can see I’m not the biggest Star Wars fan. However, I have thoroughly enjoyed the four that I have seen, and today I’m going to tell you about the most recent one, Solo.

Solo is a film you can watch without having seen any of the others, because it takes place before all of them. So if you’ve never seen Star Wars but think this one looks kind of good, go ahead and see it, you won’t be lost.

This movie is seriously jam-packed with action. Chase scenes, battle scenes, more chase scenes, gun fights, high stakes heists, etc. It is like 90% action and 10% talking scenes. This is not a bad thing, in my opinion. In regard to the fights, I think everything was choreographed amazingly; the camera work was really on point. If there’s one thing I hate, it’s a fight scene where I can’t even tell what’s going on because the camera is shaking around wildly.

I loved this cast, everyone did such an amazing job. I have only seen Donald Glover, Woody Harrelson, and Paul Bettany in other films before, and I really like all three of them, I think they’re great and were really good choices for the characters they played.

Visually, this movie was so awesome. All the aliens look cool as heck, all the landscape looks totally real, and everything is just so beautiful and seamless.

I think this was probably the best origin story movie I’ve ever seen, and I highly recommend it! It’s a lot of fun, very exciting, and I think it’s really well done. I hope you all enjoy it as much as I did!