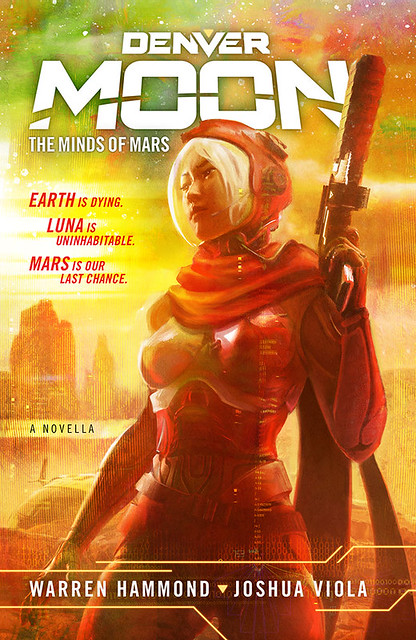 When Joshua Viola first thought up the idea of what would eventually become Denver Moon, he realized that what it really needed was collaboration. How did Viola make that happen? Time to find out.

You never know when a story idea is going to turn into something you are proud of or something you want to hide in the closet. As many authors know, sometimes a good idea pans out into a great story. But other times, it just doesn’t fit together. In Denver Moon: Minds of Mars it took a series of individual ideas and the help of a co-writer to create a whole new world.

After working on Cyber World: Tales of Humanity’s Tomorrow, I knew I wanted to write some sort of neo-noir mystery, but the where, who, and why eluded me. At least at first.

The first real solid idea of this novella, or rather the entire franchise, was the disability that the character lives with. Being color-blind might not seem like a disability for some people, but for those who cannot differentiate certain colors it is a distinct disadvantage. Things such as stoplights, 3-D movies, gaming, and even something as simple as picking out matching clothes can be a challenge. I’m color-blind myself, and know its challenges. But I know the disability doesn’t entirely make up a character.

The next idea I worked with was heritage. I’ve been a fan of Japanese movies, video games, and anime, and enjoyed how different it is from western storytelling. I wanted to capture how the Japanese culture takes ideas and spins it into something unique. To pay homage of some of my favorite types of storytelling, I decided the character would be of Japanese descent.

This was a good start but I still didn’t know who this detective (and by now I knew they were a detective) was. Ideas kept circling.

The name came as I was walking through Denver one evening under a bright full moon. Denver Moon.

On that same walk the next ideas came in a rush. The underbelly of Mars, a talking gun, and other half-formed ideas. But I knew it still wasn’t a story. For one, there was no plot.

That’s where we circle back to the cyberpunk anthology. My favorite story was “The Bees of Kiribati”, a tight story with a disturbing twist written by Warren Hammond. It impressed me enough that I hoped Warren would lend his talents to Denver Moon. I invited him for a few beers to discuss the project.

At first, Warren wasn’t interested, but he agreed to hear me out. Somehow the ideas I had already come up with interested him enough to collaborate. Together we began the task of world-building, taking ideas such as the colorblindness, and developing a terrifying Martian disorder that monochromatics were immune to. Warren developed our nemesis and, most importantly, helped flesh out Denver and give her a real personality and mission.

Each of these ideas alone couldn’t stand on their own. It wasn’t until our team was formed that all of the elements came together.