Ever since I was little, I’ve loved Greek mythology. And since the beginning, Athena has been my favorite being in all of mythology. You may say I’m biased, but today I’m going to tell you all the reasons why Athena is literally the best. And to be fair, I’ll also mention the times she was kind of not great. So buckle up, kids, we’re learning about the greatest goddess in all mythology.

Athena is the goddess of wisdom and battle strategy. Those are her main things, but she is also the goddess of crafts and weaving, so she has a little bit of an artsy side to her. She is often referred to as “the gray-eyed goddess”. She has a lot of symbols, but her most common are an owl and an olive tree/branch. Athena was an inventor: she created a variety of things that benefited mankind greatly, such as the chariot, bridle, rake, and the first ship, and some that things benefited people a little less but are still cool, like the flute.

Though she was the goddess of battle strategy, she didn’t really like war and often preferred peaceful resolutions. When she did have to fight, though, she was damn fierce and even bested Ares twice. She is almost always wearing a helmet and carrying a shield and spear, she was even born in full armor, and was exceedingly good at getting warriors amped up to fight, as we can see in the Iliad: “Athena marched down the ranks, arousing their will to attack. In every heart she injected new courage to fight to the end, and suddenly war seemed sweeter than sailing in hollow ships and making safe return to their own dear native land.”

There are many versions of every myth, and usually one of these versions portrays whoever they’re about as awesome and amazing, and another will portray them as kind of a dick. I think the most famous myth like this that comes to mind is the story of Athena and Medusa. In one version, Medusa, devoted follower of the virgin goddess Athena, is raped by Poseidon in Athena’s temple, and to protect Medusa from men, she transforms her into a monster whose gaze turns men into solid stone. Though this story puts Athena in a better light, it doesn’t add up to why she aided Perseus in slaying Medusa by giving him a reflective shield. It also doesn’t make sense why Athena would have the head of Medusa on her shield if she was just trying to protect her. Because of this, the myth that says Athena turned her into a monster as punishment for defiling her temple is probably more true (not that any of these myths are true, but, you know). However there is also the version of Medusa’s story that says Poseidon turned her into the monster for not sleeping with him because she was a follower of Athena. So either Athena was just trying to protect her, trying to get revenge, or she didn’t do it at all. 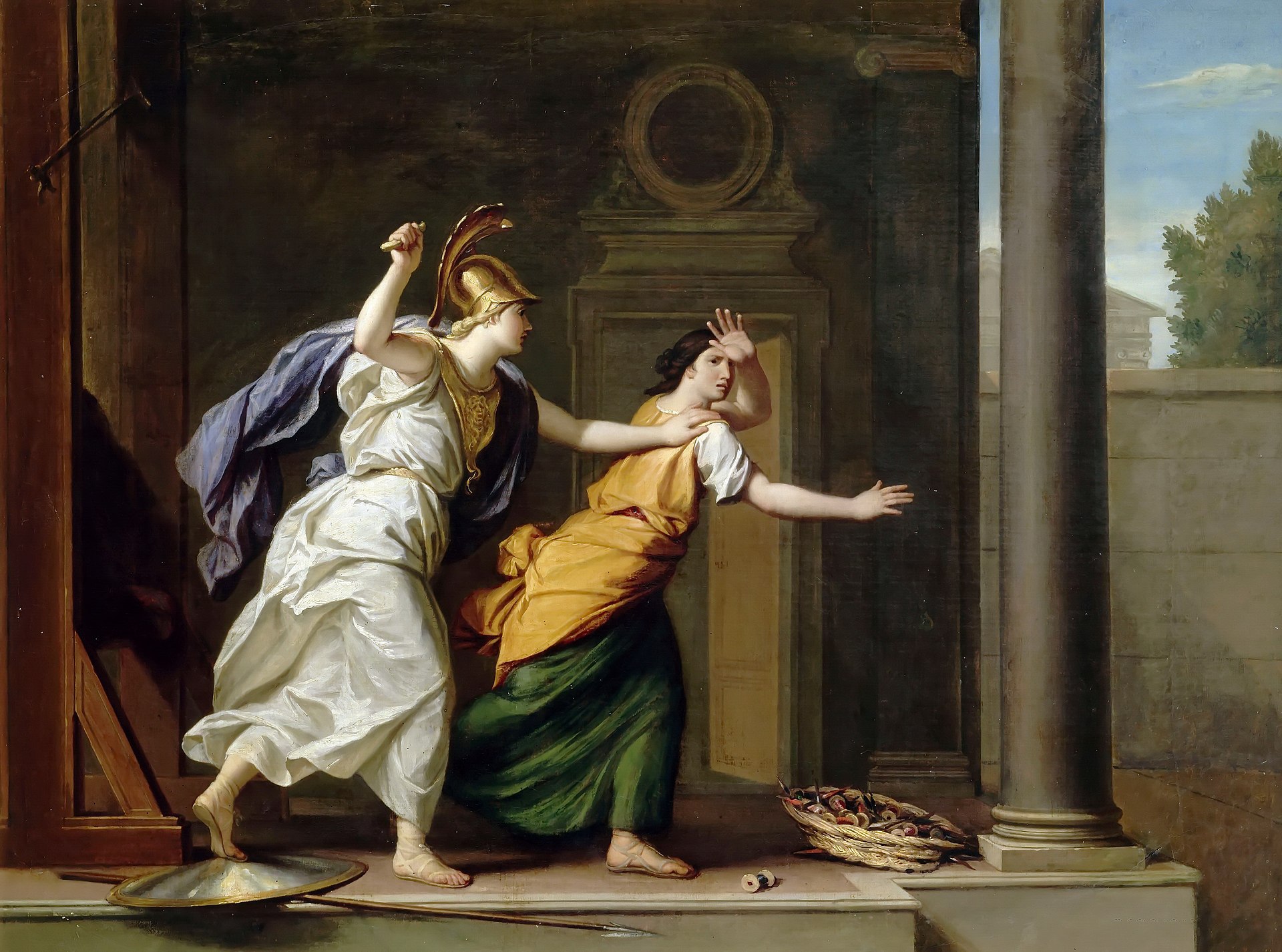 A lot of the gods were known for going overboard on their punishments. For example, Dionysus was upset that the king of Thebes, Pentheus, didn’t want to worship him, so he had Pentheus ripped apart limb from limb. Greek gods aren’t particularly known for their mercy, and the story of Athena and Arachne is a good example of this. Arachne claimed she was as good at weaving as Athena herself, so they have themselves a competition to see who is better. In some versions, Arachne ended up being better than Athena and Athena was a sore loser and turned her into a spider. In other versions, Arachne portrayed the sexual scandals of the gods in her tapestry, and Athena was pissed off she was making fun of the gods, so she turned her into a spider. I believe the latter more, because I personally think it’s unrealistic that a human could beat the goddess of weaving at weaving, but no matter which version you believe, turning her into a spider was probably not totally deserved.

So, yes, Athena had her faults. All of the Greek gods did, some were just a lot worse than others. Aside from the bad things, Athena helped basically all the famous Greek heroes, like Odysseus, Perseus, and Jason, and she directed the building of the Argo and the Trojan Horse.

In a lot of ways, she was like Prometheus, constantly giving gifts of invention to humans. She taught them to cook, spin wool, sail, and gifted them with one of the Greeks most valuable trade items, olives. Oil was a huge thing back then, man, and Athena was cause for it!

She is seriously awesome, and even though she isn’t faultless, she is still my favorite. There are plenty of gods who have done far worse things than her and given a lot less to humans.

If you want to learn more about her or just like her as much as I do, here’s a book you should check out!

Who is your favorite Greek god/goddess? Or do you prefer a different type of mythology? Let me know in the comments! Have an awesome Friday!

40 Comments on “The Gray-Eyed Goddess”