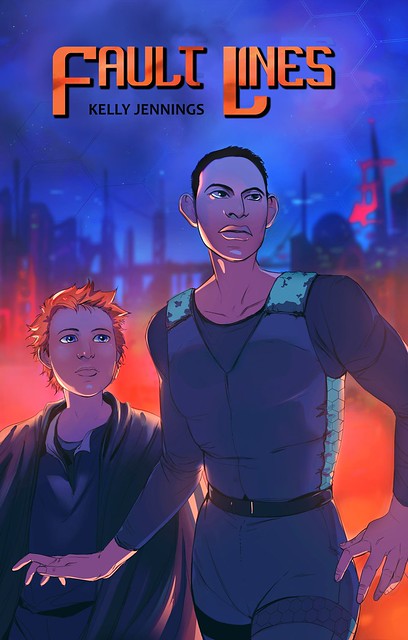 For her novel Fault Lines, author Kelly Jennings thinks up not just one, but two, civilizations, each with their own rules, laws and social preferences. And just what happens when these two cultures clash? Read on.

J. Cherryh is a big influence on me, as anyone who reads Fault Lines will notice. When I was reading Cyteen, one bit especially caught my attention: how Ariane Emory created the Azis not just for their labor, but in order to solve the problem of the genetic bottleneck created by humanity’s expansion into space.

This idea stewed around in my head along with my desire to explore my Pirian-Republic universe, and to write a longer work about Velocity Wrachant, my very favorite space captain. Some of you may know Velocity and her crew if you’ve read the story “Velocity’s Ghost” from the anthology The Other Half of the Sky.

The Pirian-Republic Universe has been the backdrop for a number of stories I’ve written. In this universe, an ecological collapse causes a series of hugely destructive wars on Earth around 2150 which destroys most of the human population. Only Oceania survives, and then only because a few multi-national businesses work together. These businesses enforce an autocratic rule over the next several centuries, resolving eventually into a government called the Republic, run by a representative Parliament. The businesses, which have evolved into the Combines, are still in control, though from behind the scenes.

Meanwhile, the group that becomes the Pirians – originally a Malaysian/Australian/Indonesian group who teamed up with the survivors on Earth’s space stations – reject the autocratic rule of the multi-nationals, abscond with two (almost finished) spaceships and flee outward, first to Epsilon Eridani, and then further on, meanwhile setting up their own system of government. Theirs is a sort of cellular democracy, with the cells being self-sustaining starships, and larger cells being associations of ships within the overall Pirian fleet.

Fast-forward about 1500 years. The Republic controls a large area of near-Earth space as well as several outlying stars (the settlement planets). Republic society is still autocratic and heavily class-based, with most of the population being either bonded workers or very poor. Then there’s an area called the Drift, not really controlled by anyone, populated by stations and merchant ship owners called Free Traders – depending on the station, these range from libertarian to brutal dictatorships. Then there’s Pirian space, with space stations and planets seeded and aided by the Pirian fleet, but governed by those who settle there. These tend to be people fleeing either the Republic or the Drift. One association of the Pirian fleet, the Siji, makes it its mission to help these refugees get started on planets or stations in Pirian territory.

But back to genetics! Because of the Founder effect, not just the settlement planets and Pirian space, but also Earth and near-Earth space have genetic issues. The early Combines had a limited population; the Pirians who fled in their stolen ships also had a limited population. Due to the vast distances between them, the groups tend not to interbreed. How to solve these problems?

Pirians are solving their problems by exuberant exogamy (they know all about hybrid vigor!) and lots of genetic engineering. The Republic, on the other hand, believe that the disastrous ecological collapse which led to the wars was caused by genetic engineering. Due to this, they have both laws and a strong taboo against genetic engineering. Furthermore, the Combine Houses are strictly endogamous, believing as they do that their “pure” genetic stock (ironically from de facto mixed roots) is superior to those who live outside their houses.

Thus, while a Combine House will take outside workers and professionals (such as Security Officers or physicians) into its House as workers, no one in the House will take genetic material from outsiders into their breeding line. Instead, they “improve” their stock by frequent coups – that is, those who are in line to inherit a given Combine Board Seat can and often are assassinated by someone lower down in the line to inherit. This is not exactly legal; but if you’re successful, then you must have been more fit, after all, and so it’s retroactively legal.

Velocity Wrachant was in line to inherit one of these board seats of a powerful Combine. But at age sixteen, having evaluated her odds of surviving to age seventeen, she lit out for her universe’s version of the territories, the Drift. There, she bought a (heavily mortgaged) spaceship, and put together her (polyamorous) crew.

Fault Lines takes up twenty years later, where she is approached by a young Combine child, Brontë Ikeda, with a deceptively simple job offer. Velocity knows better than to trust anyone from the Combines; further, she knows Ikeda House is in the middle of a coup.

But she’s also broke and desperate. The paycheck Brontë is offering is tempting, and the job seems simple enough: take her and her Security Officer a few jumps into Republic space to retrieve her stranded Security cadets from a settlement station.

What could go wrong?

In this novel, I get to explore concepts of family (genetic v. found), government (why it exists, what it’s for), personhood, and (excitement!!) genetics, genetic engineering, and genetic misconceptions to my heart’s content. Plus, shoot-outs on space ships and space stations! Did I mention this was a space opera? It’s a space opera!

← Get Your Dance On!
What You Should Be Watching: YouTube Edition: “Entertaining With Beth” →