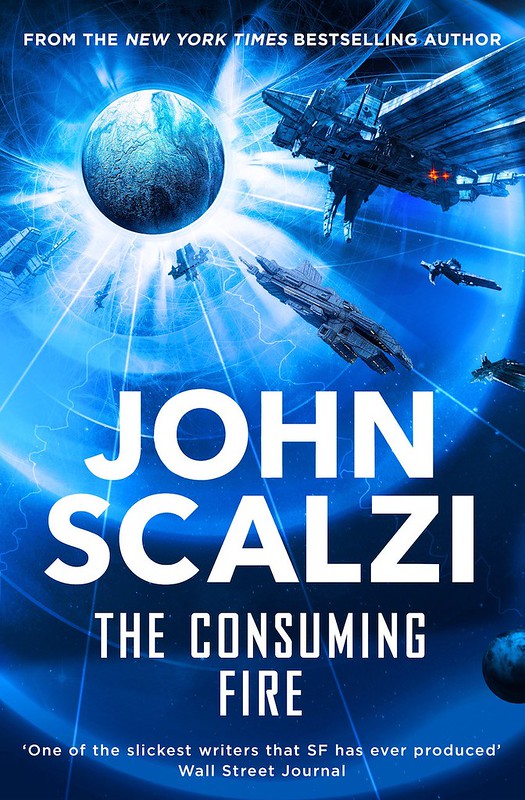 Now that I’ve had a day to sleep and reinflate my brain a bit, some additional thoughts about completing The Consuming Fire and my writing life in general at the moment:

1. I like it! I think it’s good! I also think it’s not quite the novel I thought I was writing when I started, which I think is also good because I think the novel that came out is a bit better.

2. Along this line, there were a couple of places in the writing of the novel where I was all “Oh. Oh. Well, I did not know that about this universe.” You will know them when you get to them, I think. I was happy they were there because suddenly I have a lot more options about things to do with book three, or any other books that might come after that, not that I am planning any more than three books at the moment (because yes, the empire will still collapse, and no, that’s not a spoiler), but you never know. I mean, I didn’t know Old Man’s War would have five sequels, either. Look, I’m kind of making this up as I go along, okay?

3. That said, The Collapsing Empire was always meant to be the first in a series, and The Consuming Fire is meant to be the second in a series, where there will definitely be at least a third book. All of which is to say, hey, if you didn’t like the fact that Empire ended on a cliffhanger, guess what? You won’t like the fact that Fire does, too. Mind you, as with the first book, there is a story with a complete arc in it, so it’s enjoyable in itself, and I think people are going to dig the hell out of the climactic scene in the book. But yes, some things are still arcing through to the next book, like, the continuing collapse of empire.

(A small detour here to say I’ve never been one of those people who insists on a series being done before reading the books in it, I guess in part because I knew even as a younger person that publishing was a business and if you didn’t support a series in progress, you might not actually get that next book, and partly because, I don’t know, I suppose I was okay with having to wait to find out what happened next because the world was filled with other books I could read in the interim, and I was fine with doing that. I think there are some people who are genuinely upset that books in a series sometimes leave things open, but I’m not one of those people, as long as what I’m reading now is entertaining me well enough.)

4. Because it was a second book in a series, I had to give thought to what I was following up on from the first book, what I was bringing in for the first time and what I was going to have to leave out or put into a later book. These are tough choices, and I think ones where people will end up asking me what happened to their favorite characters/plotlines which are not explored to their satisfaction this time around. The answers here are a) hey, choices have to be made, b) they’ll probably show up in the next book, or alternately, possibly in a novelette/novella-length piece I’m maybe (maybe. MAYBE, people) thinking about. Patience, folks.

Not everything’s going to fit in one book, unless you want that book to be a formless slodge just checking off appearance boxes. That’s not what I want, and I’m the writer, so I win (for everyone who thinks this was just a gratuitous slam on thick epic fantasy books, I’ll say that not every large book is a formless slodge, but I strongly suspect a very large book from me in this series would be). Bear in mind I’m the guy who for the second book in the Old Man’s War series ditched the former book’s protagonist entirely, because I thought that was the best thing for that particular book, and the series. So, yeah. I’m gonna trust myself here.

5. The writing process of this book was bounded by a couple of interesting factors, one of which was I didn’t know Tor had scheduled this book for this October until the pre-order page went up on Amazon and I saw when it’d been scheduled. I had been assuming that it would come out in March or April of 2019. But as it turns out, The Collapsing Empire sold really really well, and Tor, not unreasonably, wanted to capitalize on that momentum, a sentiment which I, as a commercial author who wants to sell lots of books, enthusiastically endorse. It did mean a shorter deadline than usual.

It turned out to be doable, because I am a professional, damn it, and I don’t believe it affected the quality of the book. But did mean for the second time in as many books I turned in the book at almost literally the last possible second. In this case the manuscript needed to be out to the copy editor on Monday morning; I sent it to my editor at 7am that morning (I’d been sending Patrick chapters earlier in the week so when I turned the whole thing in he had just the last couple of chapters to go through). I’m not sure I want to keep doing that.

(Relatedly, I remember a couple of years ago when I noted that I wouldn’t have a novel out in 2016, because Tor wanted time to set the stage with The Collapsing Empire, my dedicated haters jumped on that to suggest I was doomed, Tor had made a mistake giving me a long contract, and everything was on fire. I wonder what the going line will be on Tor deciding to publish two novels from me in the same year; I imagine something along the line of “they’re trying to get him to burn through his contract as fast as possible so they can stop bleeding money from his failures” is a contender. I do enjoy finding out how I’m failing today.)

6.  Yes, yes, I hear you say, that’s all very interesting about The Consuming Fire, but that’s done now. What’s next? In order:

And what would that novel be about? Got me, man. Another Interdependency novel is a strong possibility, especially if The Consuming Fire does well, but after writing three sequels in a row (Lock In, The Consuming Fire, The Dispatcher 2: The Dispatchening) I might want to do something new, so, who knows? Give a bit to think about it. I’ll let you know.

7. Finally and to forestall the questions that would otherwise show up in the comments: Yes, it will be out in ebook and audiobook, no, I don’t know if Wil is going to come back to narrate the ebook since that deal hasn’t been made yet but obviously I want him to, yes, I will be touring for the book, no, I don’t know where yet but probably not the same cities I went on tour in earlier this year, yes, the proposed TV series is still in development, no, I don’t have any more updates at this time, Yes, there will be a UK edition (see the artwork above) and it will come out a couple days after the US/Canada edition, no, I don’t know why you can’t get the ebook or audiobook in Australia, I mean I don’t see why it wouldn’t be available there but honestly it just seems getting books to you folks down there is just a big ‘ol clusterfuck, sorry, I don’t run international commerce for the planet. Also, yes, signed copies are likely to be available again at pub date; more details on that later.

You may assume that the answer to any other question relating to The Consuming Fire not addressed in this piece, either explicitly or implicitly, is, “I don’t know,” or, perhaps, “I don’t know yet.” When I know more, you’ll know more. Because that’s a thing I do.