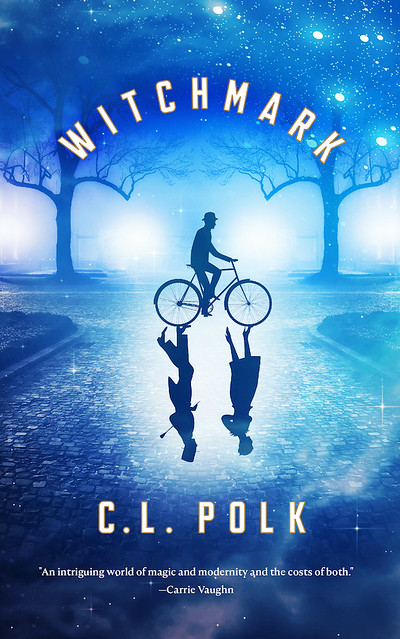 Bit and pieces, ideas and musings — sometimes you just have to wait for the one thing that makes it all a story. C.L. Polk was waiting for the one thing to thread all the parts together to make Witchmark into the novel, and found it in a monochromatic piece of history.

Witchmark didn’t just come to me in a bolt of inspiration. The muses didn’t smack me on the head and say “here is a story, go thou and write it.” My discovery of the story was more like emptying a child’s pockets after a walk outside: Shells and stones and feathers from songbirds, a bit of bone scrimshawed with dust, a frayed length of bright green ribbon. Every little piece contained a bit of mystery, something important enough to tuck away, but they were were a jumble of concepts and images that didn’t add up to a story.

But I kept them, taking out each element and matching them on a blank sheet of paper, trying to make them become story-shaped. Streets filled with bicycles, lit by golden lamps that hurt magicians to be near. Apple trees heavy with fruit, free for the taking by anyone who wanted them. The shards of a teacup smashed on the pavement, trying to break an ill-omen revealed in the leaves. I had shiny bits that didn’t come together until I found a black and white image of soldiers on parade from WWI.

That’s when the muses struck. I saw how a missing body from the morgue, a handsome gentleman in a silk top hat, and a darkness lurking in the brains of men who had been through a nightmare came together. It became a story about uncovering the awful truth lying underneath a glittering, comfortable society, and about the one person who could uncover it.

Miles Singer is a physician with healing powers hiding who he is for the sake of survival. If he’s caught, he’ll be incarcerated in an asylum with other people, believed to be at risk of becoming violent if they don’t suppress their magical talent. Or worse: his family drags him back and binds him to his powerful sister. He would be obligated to obey her decisions about his life, his magical power nothing more than a battery she can tap to do the only magic that counts among their peers: Storm-singing, the ability to control the weather.

Miles uses his gifts in secret, keeps his head down at a veteran’s hospital full of patients who share his trauma. He uses his power sparingly, trying to solve a medical mystery that only he can see, trying to find a mundane diagnosis for the troubling condition his magic reveals. but when a murdered emergency patient–who asked to see him specifically–dies in his arms, Miles struggles to keep his secrets while pursuing the mystery of his patient’s death.

But then his sister walks back into his life, and Miles has to break out of the small persona he created for himself. When he learns the secrets that his patient’s murder was supposed to preserve, he has to embrace everything he is and decide the fate of an entire country…and even doing the right thing has far-reaching consequences.

Witchmark is a fantasy novel with a mystery and a romance tucked inside it, but it finds room to talk about the aftermath of war, the machine of lies that help people look away from oppression, and how sometimes your family never sees past the picture they made of you to see who you are – and how difficult it is to make them see who you truly are.

← Portrait of the Artist as Someone Who is So Very Done With His Book, 6/18/18
More on The Consuming Fire and Future Writing Plans →