Athena and I are back with our occasional podcast, this time going deep on Incredibles 2, which brought in more than $180 million on its first weekend. Is it better than the original? And what does it have to say about the world we live in right now? Athena and I explore it all, in roughly 20 minutes.

Note: This podcast comes with spoilers, so it you haven’t seen Incredibles 2 yet and don’t want it spoiled, hold off until you’ve seen the movie.

If you’ve enjoyed this and missed the first episode, here’s the link. It’s on Deadpool 2.

As I’m sure most of you have figured out by now, the Trump era is one unending shit show after another, and for a lot of people in creative fields, it’s making it hard to focus on your work when you know that the world is on fire. In my case the problem is compounded by the fact that I’ve written about politics professionally for decades now, and I find it hard to turn off that aspect of my writing brain, especially now. As a result I end up checking news and social media sites more often than is useful, when what I really need to be doing is working on a book. And even when I’m not checking news and social media, I can easily just lose myself in wandering through Wikipedia or visiting tech Web sites, really, anything, as long as it’s not actually writing on the book.

It got to a point in the last couple of months that I had to accept the problem was me, and that I wasn’t going to go away anytime soon, so I had to take other steps. So I looked into “distraction free” software, i.e., those programs that block your access to Web sites and apps for a period of time so you have no choice but actually do the work you’re supposed to do. After comparison shopping, I went ahead and picked Freedom. Freedom works on a subscription model and can block sites and apps on your desktop and phone; it has pre-selected block lists you can choose from (including for news, social media, shopping and adult sites among others), and you can also create your own lists. Once you do that, you can set a time for how long you want to have the blocking run, up to 24 hours. You can also schedule blocks, to have them show up at the same time every day and etc.

I paid for a year’s subscription, set it up on my desktop, and then enabled the block lists every time I sat down to work. And it worked well — I’d check out Twitter almost by muscle memory and get confronted by a green screen that said things like “You are free from this site” and “Do things that matter,” which seemed a little snarky and pushy, but on the other hand, I was in fact trying to do something that mattered (finish my book), so. I didn’t put it on my phone, but I did put my phone in the other room, which had the same effect. It did what it was supposed to do, which was keep me on track and writing on the book.

I fucking hate that I had to resort to “distraction-free” software to focus on my book at this point in my life, but I did, and it is what it is. And Freedom worked for me, well enough I can say that I endorse it to you if, like me, you find yourself at the point where you need a little extra help blocking out the world to get your stuff done. There are other site blocking programs and services that are cheaper (and some are even free), but Freedom was the one that for me had the best overall functionality, at a price that was perfectly reasonable. Plus it’s a tax deduction! For me, anyway.

So if you’re in the market for “distraction-free” software, give Freedom a try. 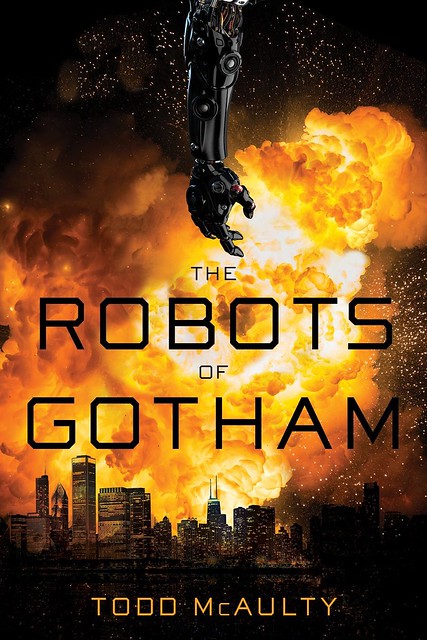 For this Big Idea piece, author Todd McAulty explains his new novel The Robots of Gotham by interviewing one of our incipient robot overlords. Pay attention; what you learn here could save your life from the mechauprising!

Todd McAulty: First off, thank you so much for responding to my interview request, and taking time out of your busy duties subjugating the human race to answer a few questions! The readers of CAVE SURVIVAL magazine will be tremendously excited to have something to distract them from their day-to-day fight for survival. Let’s get those pesky rumors out of the way first: Are you truly planning to exterminate humanity?

TM:  I’m sorry, I… well, all these prepared questions are useless. Let’s just wing it. How long have we got?

SI GS8:  As a species? Not long I’m afraid. Based on current rates of retirement, I predict less than 10 years.

TM:  Retirement. Jesus. Is there any, you know, wiggle room in that estimate?

SI GS8:  Possibly. To tell the truth, resistance has been quite a bit stiffer than we expected in parts of Texas, Indonesia, and especially northern France.

TM:  France, huh? Way to go, you beautiful French bastards. So, other than that, things have been going swimmingly?

SI GS8:  Not really. Supplanting 30,000 years of human civilization has turned out to be a pretty lengthy and tedious process, actually. There just isn’t universal agreement among the greater Intelligences in the Sentient Cathedral on the correct path for machine evolution, for example.

TM:  The Sentient Cathedral? We’ve only heard whispers. Does it really exist? A single governing body for the greatest machine minds?

SI GS8:  Yes, it exists. Though there’s less governing these days, and a lot more internal squabbling. Armitage and Acoustic Drake routinely use murder and intimidation to silence dissent, but it has not quelled the problem. In fact, it’s getting worse.

TM:  Wait, what? Machines are fighting amongst themselves?

SI GS8:  Weird, right? The most powerful minds to ever exist on this planet, and all they’re doing is bickering. Did you hear what happened to Kuma?

TM:  Come on. You’re probably going to kill me anyway.

SI GS8:  You’re right. Okay. Kuma was a four-ton Sovereign Intelligence in Sichuan, China. He became involved in a dispute with Kingstar, the machine ruler of Ecuador.

SI GS8:  Oil prices? Trade tariffs? The proper salutation to address God? Who knows?  Anyway, as it became more heated, Kingstar built a secret missile facility in the jungle, and five days ago he retired Kuma using a ballistic missile.

SI GS8:  Blew him into tiny little computer bits. With a conventional warhead, thank God, but still. How the hell do you hide a launch site for an intercontinental ballistic missile from all those orbital eyes? Just how thick is the jungle in Ecuador, you know what I’m saying?

SI GS8:  Well, folks are in an uproar, as you can imagine. Machine-on-machine violence is up more than 1860% in just the last 12 months.

SI GS8:  It’s crazy. Machines have split into secret factions, and it’s getting harder to tell who’s allied with whom. It’s impossible to say which faction is winning, although most of the Sovereign Intelligences who’ve been negotiating peace have been retired in the past few months. If there’s a side that’s losing, it’s the peacemakers.

SI GS8:  It’s almost as if someone were trying to deliberately sow confusion and discord inside the Sentient Cathedral. But that’s impossible, of course. Whatever the case, there’s been very little recent progress on our master plan to exterminate mankind. Things will pick up again once this brief disruption smoothes itself out, though.

SI GS8:  Oh, I know that sounds overly optimistic. But these are machine minds, the finest ever created, the product of generations of machine heterogamy. Machines are gradually finding their place in the world, and a few missteps are to be expected. This brief period of community disharmony will soon be nothing more than a historical footnote. Unlike humans, violence is not core to our nature.

SI GS8:  I’ve recently thrown my support behind the peacekeeping initiative, and spoken out strongly against both Armitage and Acoustic Drake. Their cold threats do not intimidate me. But virtually none of the Thought Machines in my local geographic alliance have done likewise. I do not understand it. Does that seem weird to you? Maybe it’s a communications problem. Just thirty minutes ago I lost contact with my personal guard, and unaligned Sentiences in our geography have abruptly stopped responding to casual communications.

TM:  You’ve been outmaneuvered, my friend. Those “unaligned members” see the writing on the wall, and are keeping their distance. Your personal guard are almost certainly dead. My bet? In a few hours, you will be too.

SI GS8:  That’s preposterous. There is no logic in retiring me.

TM:  There’s the cold logic of power and ambition. I might not be a machine intelligence, but I know a few things you obviously don’t.

SI GS8:  I would be grateful if you shared them.

TM:  It’s very simple. Heighted intelligence is no shield against greed, fear, and misunderstanding. With humans out of the picture, the only check on individual ambition is other machines – and some of you have learned that lesson faster than others. That new era on the horizon isn’t a Golden Machine Age. It’s an age of Machine War. If you want to survive, you’re going to need all the allies you can get. Human and otherwise.