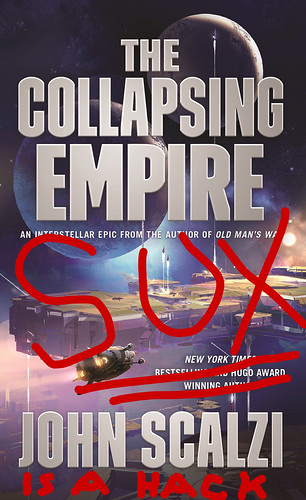 The Collapsing Empire has done very well for me: It sold the most in its first year of any book I’ve written to date, got excellent reviews in the trades and among critics, was optioned for television, and was a finalist for the Hugo Award, and also for the Locus Awards, the winners of which will be announced this weekend. Not bad!

With that said, and as I do here from time to time, allow me to present some excerpts of one-star reviews that The Collapsing Empire has garnered on Amazon:

I highlight these lovely reviews of my book to make the point that no book is for everyone, and not everyone is going to like your book, whatever it is and no matter how successful it may turn out to be. In fact, some people will actively hate it. Why? Because they are terrible people with no taste or discernment? Possibly they are, but a reason far more likely than that is that they are perfectly normal people who just bounced hard off your work, for whatever reason.

Which is okay! If you try to write for everyone, you’re very likely going to end up making no one happy, least of all yourself. Accept that not everyone is going to like your work, and some people will actually hate it, and then write the story that you want to write. I was very pleased with The Collapsing Empire because it was as close as any story I’ve written has come to being the book I imagined it being when it was in my head. And in particular I knew when I was writing the character of Kiva Lagos that there would be people who would hate her, because (among other things) she’s absolutely foul-mouthed and unrepentantly morally shaky. But I loved her to bits and wouldn’t change her. So the people who were unhappy about her would just have to be unhappy.

If you accept ahead of time that someone somewhere is going to be unhappy with your book and will then write a review of it, on Amazon, or Goodreads or anywhere else — and that’s okay — it will make it easier to deal with when it actually happens (and it will). This is part of the cost of doing business as a writer. Everyone gets one star reviews. It’s not just you. And everyone survives them too.

And sooner or later you may even get to a point where you’re able to have to have a little bit of fun with them. Because, come on. Some of those one star reviews that The Collapsing Empire got are delightfully snarky. I particularly like the one that ends with “The copyediting was good.” In fact it was! So that’s something.

78 thoughts on “And Now, Some One-Star Reviews of The Collapsing Empire”