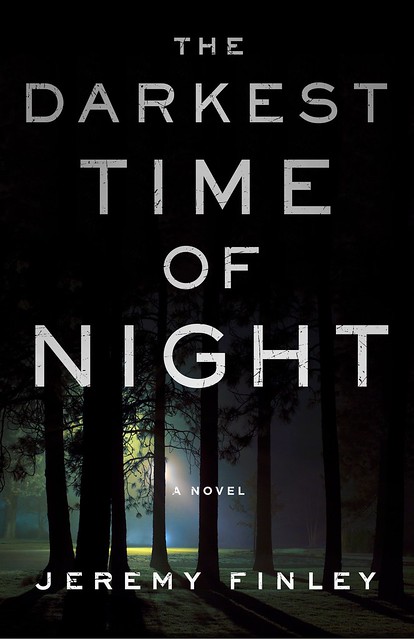 What is truth? The question is an ancient, indeed, biblical, one, and more importantly for our purposes today, goes to the heart of Jeremy Finley’s new novel, The Darkest Time of Night. Does Finley have the answer? We’ve got the true news here.

It came, truly, from fake news.

When I set out to write the fictional story of the disappearance of a U.S. Senator’s grandson, and how it’s linked to unexplained vanishings across the globe, I knew I wanted the central conflict to be a clash of deep-rooted reality and the supernatural.

What I didn’t realize, though, was how a constant strain in my professional life as a reporter inadvertently slipped into the part of my brain that writes fiction.

Against all intentions, my speculative thriller was born from the very controversy over the catchphrase I have come to despise.

That realization felt like a sucker punch. The term “fake news” is the equivalent of nails on the chalkboard for the embattled journalism industry.

While recently investigating the director of a government agency, I called him to explain the hidden camera video I had captured of him, and the other public records I’d obtained, that raised a whole lot of questions if he was misusing taxpayer dollars.

His response: “My President thinks reporters are fake news, and I do too.”

It was frankly infuriating. I was calling to explain the documentation – the proof I’d collected – that I would be using to write a series of investigative reports. I wanted him to see it all, so he could respond and I could write a fair and accurate story.

But he later backed out of a scheduled interview and refused to meet with me. I explained over and over that our findings weren’t based on sources or accusations, but rather tangible proof.

He was terminated not long after the stories aired and is now the center of a criminal investigation into possible misuse of public funds.

But my interactions with him still stung. It wasn’t that he refused to do an interview with me – lots of public officials do that to avoid having to answer questions – it was that he refused to look at the proof. He disputed my findings as fake without even looking at a single bit of it.

This concept of what is true, and what is not, is permeating our society. There is no place it is waging more than in our nation’s capitol, where journalists file stories based on trusted sources and documentation, only to have much of their work labeled as false information from the White House.

It’s certainly not a new tactic. Nixon launched now famous attacks on the credibility of the Washington Post and the New York Times. Obama’s administration clashed with the press as well from time to time over accuracy. The citizenry is struggling with who to trust: journalists tasked with uncovering the truth, or the leaders of the free world?

My novel, The Darkest Time of Night, will enter the world on June 26, in the midst of this latest war on truth.

The timing was clearly not by design, but fitting. The big idea of my novel, after all, is the desperate search for the truth in a time when even credible information is dismissed as fake.

In my novel, when neither the FBI nor any of the criminal experts brought in are able to pinpoint what happened to the missing boy, the person who no one turns to for answers may actually know the truth: the boy’s grandmother, Lynn Roseworth.

Decades before she was the wife of a U.S. Senator, Lynn was a secretary for a university astronomy department, where she became entangled in the astonishing work of a professor into the unexplained disappearances of people.

When her own grandson vanishes in circumstances frighteningly similar to the cases she once investigated, she fears she alone knows what happened. But the revelation could risk her husband’s political career.

And who would believe her? At the time of her grandson’s experience, Lynn is marginalized, a quiet politician’s wife, tasked by her husband to keep the family intact while the true professionals do their work.

When she at last launches a desperate search to find the truth, she finds that many, even within her own family, do not believe her, and how far they will to stop her.

Let us not make a comparison to the pursuits of a fictional character to the real-life challenges facing journalists and others who are seeking to expose the realities of our time.

But the idea for book was born from an all-true real struggle to decide what, and who, to believe. To step out of our comfort zone, listen to others with opposing ideas, and challenge what we even believe.

The truth is out there. We just have to be able to recognize it when we see it.