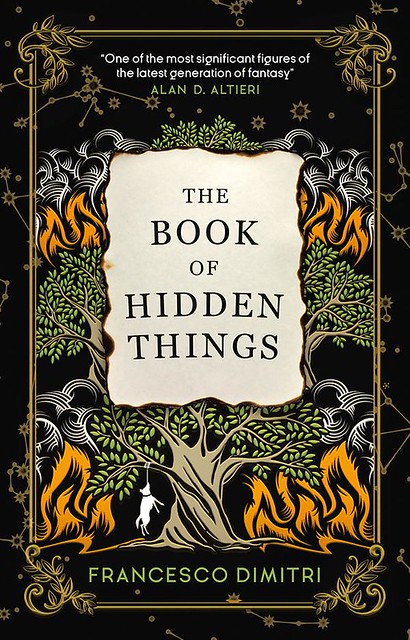 Friendship, magic and a sense of place: All of these are important to Francesco Dimitri, and are the foundation of The Book of Hidden Things, the author’s first book written in English. He’s here to discuss all three, and his novel.

We live in a world full of darkness and grace. There are immortal jellyfish floating in the sea and thousand-year-old woods thriving within cities, friendships which last forever and others which break over a tabletop game, weird legends and even weirder scientific finds. It is a world made of magic, of the good and bad sort. We use rationality as a glue to keep together all the things that we can’t figure out, and it is an important, precious glue, but the building blocks of our world are still all the things that we can’t figure out – the hidden things.

I wanted The Book of Hidden Things to make you feel the magic in the same way that a good joke makes you laugh. I wanted to write an entirely human story with magic as a base note: jokes are about people doing funny things, but they are rarely about people laughing at jokes. Tolkien said that fantasy authors create ‘secondary worlds’, which is a beautiful way to put it. I didn’t want to do that. I wanted to play a variation on my own world.

I love books with fireballs (one of my Italian novels had the god Pan, gender-fluid fairies, and flying folks), and yet when I am reading a story and a fireball appears, I am reminded that is a story. This is not bad by itself: if the story is well-crafted, I will still believe that it is true in another world, and I will cry and smile with the characters. But I will not believe that it is true in mine, whereas, when I am reading, say, John Fante’s Ask the Dust, I can believe that the same things might happen to me (absurd as it is). I wanted that. Only, with the supernatural.

TBOHT follows three men in their mid-thirties, friends of a lifetime, who look for the fourth member of their gang, who disappeared. More than investigate, they sniff around the way you would do if there were no trace of your mate and you weren’t sure what to make of it, even considering that your mate has a history of oddness. They set in motion personal consequences they are not ready to deal with, and they find out things about each other which they had tried to keep, well, hidden. You can find a lot of summaries online, but these are the bare bones of the story. There is something about friendship, there is something about the troubles created by a sexist culture, there is something about how hard it is to grow up for real. And there is a sense of magic.

I set the story in a wild, strange, corner of the world: the part of Puglia where I was born, and which I left at 18. Italy is shaped like a boot, and Puglia is the heel of the boot. It is a stark landscape where the reds are very red and the blues couldn’t be more blue. It is as beautiful as unforgiving, blessed and cursed by long hot summers, strong winds, hail. It rarely rains, but when it does, it is often a storm. I wanted this story to convey the landscape, the food, the sex, the wine, how sensuous and excessive everything is down there, and get to the magic through that.

Google ‘Campomarino di Maruggio’ and look at the beaches on which I grew up. Then try ‘ulivi secolari Salento’ and you will see how uncanny olive trees can be. And there is more than visuals. The first warmth in March wakes up the wild flowers and the herbs, and in the smaller villages the air itself is scented throughout spring, 24/7. In summer, you feel the heat on your skin like a physical weight. Flavours are very sweet and very bitter. Not all is good: when Sirocco, the wind from the sea, blows, the air gets damp and your mood too. As local lore has it, Sirocco blows for three days, and for those three days you will be miserable. The sea is miserable too, and the sky. Humans and landscape are joined by breath.

If nature is intense, culture is no less so. There used to be an ancient civilisation, which has been almost entirely wiped away, except for vague traces surviving in ruins, names, folklore. There are small churches and shrines everywhere, in vineyards and barren fields and olive groves, and statues of the Virgin Mary by the beach, with fresh offers left by who knows whom. The local music, la Pizzica, is based on an exorcism ritual which used drums and dance and was still practised in the Sixties. On years even drier than usual, people (well-educated people) will still work what can only be called a magic ritual, dragging tree trunks for miles in the name of Saint Peter, who, so the legend goes, visited there and found a secret spring. It is a place that the Joker would understand: if it doesn’t kill you, it makes you stranger.

All I wanted to do was turn up the volume of reality – of friendship, of magic, of pleasure, of fear. I set the story in a place where reality is already loud: I took a land which already borders on the fantastic, and made it slightly more. There are things in the book which might seem made-up (the local mafia called Sacred United Crown) but are real, and others which look real but are made-up (no, I won’t reveal the trick).

And this is all; I won’t say more, not to ruin the punchline.