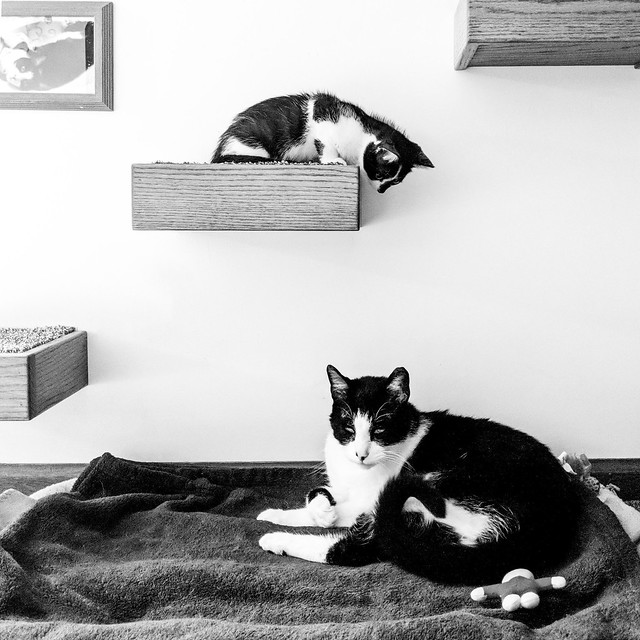 This picture pretty much sums up their relationship at this point.

In general the rest of the cats are slowly learning to tolerate Smudge, who to be fair does not make it easy for them by running right up them and getting into their respective furry faces, which they do not like at all. They’ll all figure it out eventually, I expect. 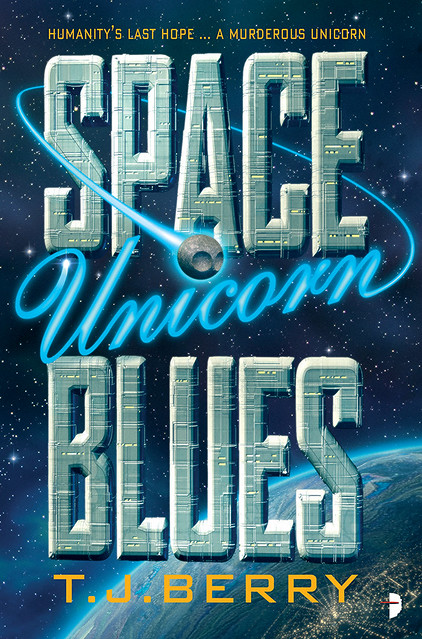 Forgiveness: A complicated topic in any piece of literature, and one that doesn’t necessarily come up that often in science fiction. But it’s in T.J. Berry’s new novel Space Unicorn Blues, and the author is here today to explain why it’s integral to what goes down in the book.

I believe in second chances. That’s a hard thing to say, because I also believe we have the right to walk away from people who harm us and never look back. Reconciling those two positions is one of the big ideas at the heart of Space Unicorn Blues, and it’s the one that has the most resonance for me.

In the opening of the story, part-unicorn Gary Cobalt is reunited with the starship captain who kidnapped, tortured, and framed him for murder. A decade has gone by since his imprisonment at Jenny Perata’s hands, but he must now decide if he’s willing to give her another chance. Gary wrestles with how to cooperate with a woman he has never trusted. At the same time, Jenny struggles with how to make amends for the horrific things she’s done during a time of war. Gary eventually decides to join her crew, but that moment is only the beginning of their undertaking. Jenny and Gary continue to navigate the turbulent waters of re-forging a civil relationship throughout the book.

I don’t have a template for making amends—it’s a messy, nonlinear process—but I wanted this to be a key idea in the story. Making amends is often an ongoing work-in-progress, not a single apology or act of contrition. It contains elements of restitution, restorative justice, and trust building. It’s more complex than simply handing over cash or serving a prison sentence. Some amends may need to last a lifetime. How do you capture such a nebulous process in a 100,000-word book?

I started by rejecting the “instant forgiveness” narrative. In fact, I really dislike the word “forgiveness.” For me, it focuses on the survivor’s willingness to let go of the past instead of the abusive person undoing the harm they have caused. The burden of action is on the wrong side of the equation. Gary never offers Jenny forgiveness for her actions because she has not yet repaired the damage she has done. How could she possibly make up for a lost decade in prison? For treating Gary’s body like a seam of coal to be mined or a pocket of natural gas to be tapped? Figuring out how to atone for treating Gary as less-than-human is one of Jenny’s main conflicts throughout the book.

There are a lot of apologies in the news lately. Abusers are producing a neatly packaged mea culpas that deftly walk the line between acknowledging their harmful actions while at the same time minimizing them. Most of these apologies, frankly, are garbage. They focus on the perpetrator and their toils, both before and after the abuse. But nearly none of them touch on making amends to the people who were hurt. Sometimes, these “apologies” bypass remorse altogether and slide straight into self-forgiveness .

This is the kind of non-apology I tried to avoid in this book. Jenny admits what she’s done, apologizes for it, and makes clear she’s searching for ways to make up for the harm she’s caused. Gary acknowledges her efforts, but doesn’t ever absolve her of culpability. She doesn’t get an easy forgiveness checklist. At one point she says she doesn’t know how to to make amends, and he kicks the conversation right back to her with, “I hope you figure it out.” Gary’s not here to the do labor on her behalf. Jenny, like all abusers, has to do the work for herself.

Like most of us, I’ve been hurt by people in my life. People I cared for have caused tangible and lasting negative effects due to their carelessness or malice. Sometimes, I’ve cut those people out of my life. Other times, the solution is not so clear. What does it look like when there’s more good to a relationship than bad, but the wrongs still have to be addressed? Where is the template for when we want to rebuild that connection instead of discarding it? We don’t see that narrative depicted as often in books, television, and films.

Indulge me for a moment—because I’m quite fond of the Marvel Cinematic Universe—and think of the second Guardians of the Galaxy movie in which Peter Quill learns that his kidnapping by abusive gang leader Yondu was actually a rescue from his even more abusive godlike biological father. Yondu’s appalling treatment of young Peter Quill is instantly forgiven and his storyline gets one of the more poignant endings in the MCU. (I’ll admit, I cried.) But this means never see the nuance of Peter and Yondu walking the thorny path of making amends and rebuilding trust.

This is where I pick up Jenny and Gary’s relationship in Space Unicorn Blues. Gary feels there’s something to be salvaged between them and he’s willing to offer Jenny the chance to do better. Throughout the book, we get to watch Jenny make choices that prove her commitment to lasting change. And when she makes a choice that saves millions of lives while tearing her own family apart, Gary is ready to admit that she’s on the right path.

Just because making amends is the right thing to do, doesn’t mean it’s easy. Not all of us can apologize by writing our wives a single on our platinum-selling album, but every one of us can make changes to become a better person and repair the damage we’ve caused. I don’t offer any tidy solutions in Space Unicorn Blues, but I hope readers are willing to come along with me on this tough and complex journey.