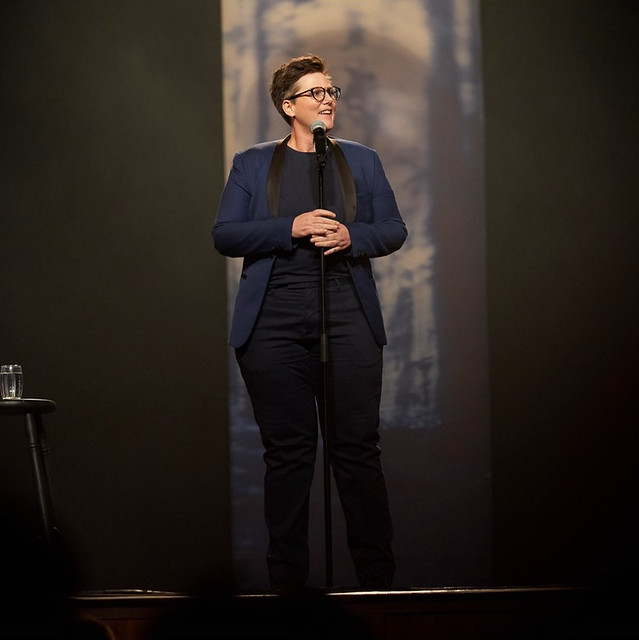 You don’t need me to tell you that Nanette, a new Netflix comedy special by Hannah Gadsby, is an unexpected landmark in stand-up performance, because so many others will tell you that. But I’m going to anyway (before I go on to make a tangential point): For the first fifteen minutes or so, Nanette is a pleasant enough show, with Gadsby talking, in a winningly self-deprecating fashion, about growing up “a little bit lesbian” in Tasmania in a time when being such was actually and literally illegal. And then, having established this winningly self-deprecating mode for making her audience comfortable with who and what she is, Gadsby spends the rest of the special angrily and righteously deconstructing those first few minutes, not sparing herself, her audience or the culture at large.

I had heard about the special from friends who were discussing it in detail, so I knew a little bit about the outlines of what I was going to see when I flicked it on. But hearing about it and watching it are two entirely different things. I hadn’t heard of Gadsby before literally five days ago, and at this point I have two thoughts about her: One, I’m not sure I can go back and watch anything she did before this without knowing what it cost her, as she describes it in Nanette; Two, if in fact she doesn’t do stand-up comedy again (as she suggest she might not in the special), she’s quite possibly already changed how stand-up gets done. It seems nearly impossible to me that anyone who does stand-up comedy, or wants to, won’t see this special and realize how much it changes the game.

Well, let me back up on that. People are human, they like jokes; comedians are human, they like the attention they get from jokes. People aren’t going to stop performing comedy, some of it easy and simple; people aren’t going to stop going to comedy shows, many of them pleasant and disposable. Comedy is mostly entertainment, and not all entertainment is challenging or meant to be, and not every entertainer will want to push their audience to the edge of their comfort zone (and of course there’s more than one “audience”). Stand up as we know it will survive Gadsby and Nanette, for better or worse.

But I think that practitioners and audiences who are interested in how the stand-up sausage gets made are going to realize that Gadsby has raised the bar for them with this special. She’s given the game away, and made the point that the self-deprecation of comedy, the easy comfortableness of it, isn’t harmless to comedians from the margins of society, which still is anyone who is not straight and white and male. You can make the same jokes if you want, but you can’t go back from that understanding. Gadsby may or may not want the responsibility for that; ultimately with Nanette, as she says, she wants to tell her own story from where the focus of the story is not harmful to her. It’s her story, and it’s personal. But I’m pretty sure it will have implications outside of her personal life, particularly with comedians. Gadsby and Nanette has given them all homework.

I found Nanette a remarkable piece of writing and performance, and tangentially, in watching it I found Gadsby illuminated something for me about my own recent writing and thinking. I write a lot of humor and I’m pretty good at it, and over the years I’ve written quite a bit of humor about current events. I find myself rather less inclined to write humor about current event these days, particularly in a format longer than a Tweet (I’m having no problem being tweet-length snarky). It can still be done, and brilliantly — look at Alexandra Petri in the Washington Post — but I have a harder time doing it right now.

In Nanette, Gadsby makes the point that a punchline is the end of a joke but not the end of a story; she argues it’s often in the middle of a story, and focusing on the punchline comes at the expense of what comes after, which is usually more important for the people living the story (she illustrates this in the special in a way I won’t tell you now but I imagine will affect you deeply when she recounts it). I think one can quibble with this formulation in all sorts of ways, but I think for me it’s well on point as to why I feel restless and dissatisfied merely cracking jokes about what’s going on in the US right now. I’m less concerned about the punchline and more concerned about what’s coming after that. I don’t get much joy out of writing humorously about what’s going on today, because after the punchline is a miserable state of affairs that’s going to need more than jokes to get clear of.

I say my own observation is tangential to what Gadsby is on about in Nanette because it is, not in the least because Gadsby and I are coming from different places when we write funny stuff. We are different people and one of us isn’t in fact in the cultural margin. And I don’t know that this will stop me entirely from writing humorously about current events; I’m me. But it does help me understand why it hasn’t been making me happy: Basically, because it feels incomplete to me. I think it’s all right to write humorously about what’s going on in the world right now. But it’s not sufficient in itself. There’s more to be done, and more to be done by me, and I’ve got some thinking to do on that.

In this respect, Gadsby and Nanette is giving me homework, too. I can’t say I’m 100 percent happy about this. I’m lazy and I don’t necessarily want to do the work. But I also can’t pretend that I don’t know this about myself now. That’s a real thing.

36 thoughts on “Nanette, Hannah Gadsby and Me”