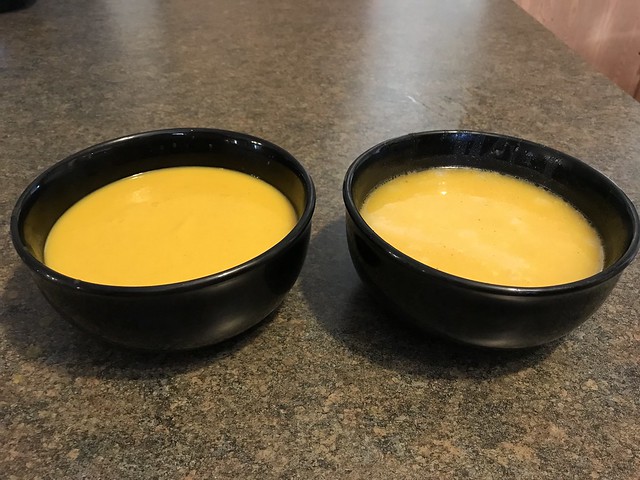 Soup is the greatest food known to mankind. There’s so many different types, so many different flavors and endless possibilities as to what can be created. Some soups have grains, some have meat, some have cheese, it all depends. Some are chunky, some are creamy, and others broth-y. Honestly, you can make any kind of soup, it’s truly magical!

One soup I really love is butternut squash. It’s creamy, flavorful, and reminds me of my favorite time of the year, fall. Also, it’s orange. How many foods do you eat that are orange?!

Anyways, I made both, and had my dad and friend taste test them. They both liked the homemade version better. The homemade version was much thinner, not creamy at all, weirdly gritty (like orange juice pulp kind of), and had chunks of onion in it. The store-bought was pretty thick, really creamy, definitely on the sweeter side (like a lot of nutmeg or cinnamon flavor), and overall pretty good.

So, by majority vote, the Food Network version wins, but I didn’t really like it. It was far too thin. The flavor was fine (make sure to add a lot of salt), and I liked the onions, but it just wasn’t what I was looking for in butternut squash soup.

What’s your favorite kind of soup? What’s the best recipe you know for butternut squash soup? Let me know, and have a great day!