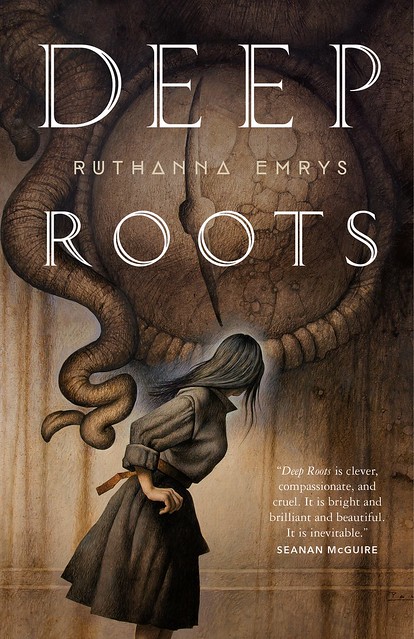 Community matters, even when or if your community is something… eldritch. As Ruthanna Emrys explains in her Big Idea for her newest novel, Deep Roots.

I’ve never lived among my own people. This was obvious to me, growing up, and I came to the logical conclusion that I must be an alien. Maybe I was from Pluto? My childhood grasp of comparative planetary ecology wasn’t very clear, but I definitely wasn’t from around here. Occasionally I found snatches of belonging at retreats and summer camps and holiday get-togethers. Eventually I pieced together the commonalities, and realized that I was not so much Plutonian as Jewish, learning to pass among Protestant neighbors and their culture almost, but not quite, entirely unlike the beliefs and assumptions I picked up at home.

Of course, by that time, I didn’t quite fit in with all-Jewish communities either. Instead, I became most comfortable in places with no majority at all. Urban cosmopolities, where no one is expected to be just like anyone else, and we build bonds around the assumption of mutual weirdness. But I always wondered what it would be like to fit in perfectly. To take for granted that my neighbors think and believe just as I do.

Aphra Marsh, the protagonist of Winter Tide and Deep Roots, had that—and lost it. Until she was twelve, all her neighbors learned Enochian alongside English, worshipped together at the Temple of Dagon, and walked down to the beach every evening to welcome their elders from the waves. Then came the raid.

Two decades later, Aphra and her brother were all that remained of the Deep Ones on land. In Winter Tide, they returned to the ruins of Innsmouth to recover a piece of their heritage—and ultimately promised to rebuild their childhood home. So in Deep Roots, they head for New York City, following the rumor of people who carry a trace of their family’s blood. Maybe enough that—if these lost cousins are willing to move back to the place their ancestors fled, and learn the ways once practiced there—their children might be strong enough to go into the waves as elders. Maybe enough that Aphra won’t truly be the last.

Of course, Aphra’s cousins have their own ideas about what they want to do with their lives, and their own communities, some of which aren’t just multicultural but multispecies. The Outer Ones offer the polar opposite of Innsmouth: a life of endless exploration and cosmopolitan conversation, at only the smallest of costs. It’s not what Aphra thinks she wants, but it’s closer to what she’s started to build. I wanted to explore the tension I’ve found in my own life, between the comfort of familiarity, and the risks and joys of living with difference. And, deeper, the ways that comfort can mask brittleness, and seeming risk can mask resilience.

If you do the math, I was writing Deep Roots in 2016. Actually, I was mostly not writing Deep Roots in 2016, an issue that I understand was somewhat common among my fellow authors. I would start on a scene, someone would say something horrible on the news, and I would spend the evening freaking out on Twitter. I figured I’d catch up after the election, when the grand drama of fighting back the Dark Lord would finally resolve and I’d be able to relax.

Obviously, I’d misidentified which book we were up to in the trilogy.

The election infuriated and terrified me. It also brought many things into clearer focus. One of those was how strongly I valued my cosmopolitan community, and the embrace of neighbors who didn’t expect me to fit neatly in a box. But another was how those communities can fail. Sometimes we love our neighbors—and sometimes we only manage a surface civility, without the deeper caring and respect that make relationships work. And so the story began to come together: one about the glories of Innsmouth and of New York, and the things that are hard to find in either place. It’s a story about learning what we really want out of community, and family, at those rare and terrible points where we’ve lost so much that we’re forced—and able—to build something new.