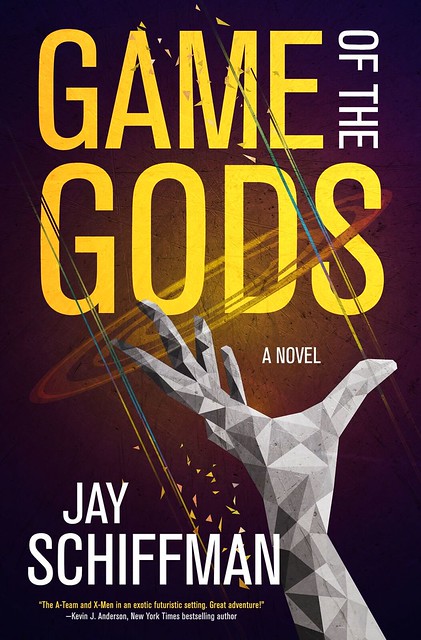 What is best in life? If you are, say, Conan the Barbarian, you have one sort of answer. If you are Jay Schiffman, or one of his characters in his novel Game of the Gods, your answer might be very different indeed.

There are two aspects of my life that have significantly shaped my worldview, and in turn, influenced my novel Game of the Gods. Family and politics.

I’m from a big family, married into a big family, and have created a big family of my own. If numbers matter: my wife and I have 6 kids; my wife is from 6, and I’m from 4. I can fill a small school bus with nieces and nephews and they just keep coming. Even if I wasn’t close with my kin (I am), the sheer volume of siblings, in-laws, cousins, nieces, and nephews would probably define who I am. I can throw a rock and hit a relative.

Similarly, my love of politics, academic background as a political scientist, and my current political obsessions have greatly influenced my work as a writer. I’ll keep my political views to a bare minimum and simply say I’m a political junkie addicted to all things Trump. A New York Times piece about the underbelly of Trump, Inc., coupled with a caffeine chaser, is my drug of choice.

Politics and family lie at the heart of my novel and pump life into its dramatic passages and character development. At its core, my novel is a sci-fi action adventure. The main character, Max Cone, is an accomplished military leader and judge in a futuristic nation that is losing its power. His family is taken and his friends are killed. He assembles an unconventional band of outcasts to help him fight for his loved ones. This talented, but unpredictable group must navigate a dangerous world filled with despots. Action drives the narrative, but what motivates the characters is integral to the story.

If there is a single animating idea tying these disparate characters together it’s the significance of close personal relationships versus collective identities. For some characters in Game of the Gods, the bonds of family are far more important to their human experience than transcendent ties to religion, country, or politics. “Truth” is more likely to come from a child’s hug than from a charismatic clergyman. Some characters know who they are and what’s important to them, while others struggle aimlessly—meandering through different “isms” and oscillating between the terra firma of family and the lofty dogmas of religious movements.

The tension between close family ties and transcendent ones often takes the form of characters questioning what they once believed to be right. For some characters, questions arise about the truthfulness of a father or spouse, and for others it’s their faith in the divine.

Max was once a “True Federate,” an accomplished military commander and the highest judge in the Federacy. But we learn early on of his disillusionment, and soon after, the heartbreaking reasons why. In Max’s case, the love of family and nation are in direct conflict. The Federacy deemed his wife a traitor and punished her harshly as a result. Max recognizes that she was in fact disloyal, but he cannot forgive the Federacy for her punishment. As we follow Max on his adventures, his relationship with his wife, country, and God are called into question and he must come to terms with the authenticity of each.

Max’s group of outcasts faces similar existential concerns. Mavy Sway, a loyal emissary for the world’s most powerful religious leader, the Holy Father, balances the love of her family with her desire to see the truth about God’s purpose. Trace Rollins, a natural cynic, spends much of his life shuffling through different collective identities—revolutionary, partisan, abstainer, dissident. Finally, he gives up and becomes a drug addict. But whereas Mavy has a major crisis of faith in her family and her God, Trace, an otherwise lost soul, never questions his commitment to his loved ones. Each member of Max’s group struggles with questions of identity and meaning.

Except one. Pique Rollins.

Although Pique is only 13 years old, it is not her age that causes her not to question. To the contrary, it is her wisdom.

I should say here that Pique is my favorite character and one that is modeled on women in my family I greatly admire. Pique has all the “answers” to life, but only because she has so few questions. She’s content. She knows herself. There’s no existential crisis. No need for deeper meaning. She finds fulfillment in friends and family.

When Max first interviews Pique to see if she’s worthy of becoming a Federate citizen, she tells him that all he needs to know about her is that she’s a good fighter and she doesn’t lie. To the extent Pique has a guiding moral philosophy, it’s humility about sweeping claims.

In an important exchange between Pique and Mavy, we see their different worldviews, and Max’s take on it:

Pique nods her head as if she understands. She doesn’t, but the most important thing for her is that Mavy feels like she does. For Pique, it’s not about Truth with a capital “T.” It never has been. It’s about the little truths people share every day: honesty, caring for loved ones, showing compassion to strangers, being better than our instincts. Her idea of what’s important couldn’t be farther from Mavy’s. “I’m a good fighter and I don’t lie,” Pique tells her. “I don’t understand a lot more than that. I’m not sure I want to. But I know one thing. Someday, I hope you and I can be close. Like sisters. Okay. You and I can be sisters.”

One thought on “The Big Idea: Jay Schiffman”