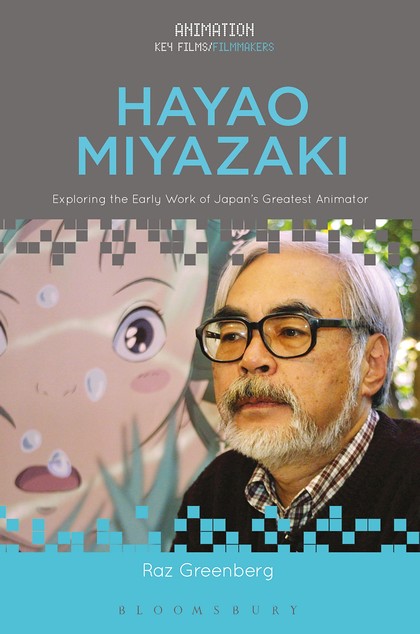 My first personal awareness of Hayao Miyazaki didn’t occur until I was well into adulthood, but for Raz Greenberg, his journey with the great animator started much earlier, and led him to write a book on the filmmaker, Hayao Miyazaki: Exploring the Early Work of Japan’s Greatest Animator.

The roots of the big idea behind my book, Hayao Miyazaki Exploring the Early Work of Japan’s Greatest Animator, go back to a childhood experience I share with many other members of my generation – that is, kids who grew up in Israel of the 1980s. We only had one television channel back then, the national broadcast channel, and it had a very strict, pedagogic agenda about what kids are supposed to be watching. One show that fell into this category, which the channel broadcasted many, many times during that decade (almost every other summer vacation), was known in Hebrew as Halev (“Heart”). It was an animated adaptation of a short story included in Edmondo de Amicis’ classic 1886 children’s novel of the same name, and it followed a courageous boy named Marco on his journey from Italy to Argentina to find his mother, after letters from her stopped coming.

The original novel, with its deep patriotic themes, was already considered a classic in Israel; many young Israeli parents who read it in their childhood were overjoyed to discover it again and watch the show with their children, following Marco’s weekly adventures all the way to the happy end. But there was one element in the show that left both its young Israeli viewers and their parents puzzled: why would a show about an Italian boy travelling to Argentina have Japanese end credits?

Yes, that was my generation’s first major exposure to anime. We’ve had a couple of science fiction shows to watch as well (Star Blazers and Battle of the Planets), but for the most part, we were raised on a healthy diet of Japanese-produced adaptations of classic children’s literature, with Halev being the one show that all the ‘80s children remember.

Flash forward to the end of the ‘90s: my interest in comics led me to the discovery of the world of anime and manga, which in turn led me to major in Asian studies during my BA. It wasn’t long before I became acquainted with the works of Hayao Miyazaki, first through his incredible manga epic Nausicaa of the Valley of the Wind and later through his films. This was a few years after Princess Mononoke made a lot of noise in the Japanese box office, and a few years before Spirited Away made Miyazaki a household name all over the world, a time when little of Miyazaki’s work was actually available in translation, but even the very few items I could get my hands on made me fall completely in love with what I saw. The more I got into Miyazaki’s work, the more I realized that something in his design style feels very familiar. A few searches through the internet revealed that indeed, Miyazaki was one of the animators who worked on Halev.

My initial reaction was “cool!” and that was pretty much it. But when I started working on my MA thesis about childhood in Miyazaki’s films, by which time most of his cinematic filmography became available for the non-Japanese audience, I realized that this filmography actually tells only part of the story. Miyazaki directed his first feature-length film in 1979; during the 16 years that preceded this movie, he worked as an animator in other people’s films and television shows, and also as a director in various televisions projects. There was an entire Miyazaki filmography here to be discovered beyond his familiar cinematic work. At some point, I realized that I want to write a book about it.

I started collecting materials – relevant films, television episodes, comics, books, articles and interviews. As often happens, other stuff got in the way: I was struggling with my PhD thesis (my academic focus now being animation theory in general, rather than Japanese animation), work, other stuff… but when I finally set down, and started writing, I began to understand that it was no coincidence that the animator who worked on a Halev is also responsible for classics like My Neighbor Totoro, other than the very obvious elements of the former that echo in the latter.

Like all great storytellers, Miyazaki’s works are about people – and whether these people come from Japan, Italy or anywhere else, he always takes his audience in an unforgettable journey as they watch his protagonists grow emotionally. Exploring Miyazaki’s early works and seeing how they inspired (as explained in the book’s concluding chapters) his later acclaimed works gave me a fascinating perspective on how Miyazaki himself grew as an artist. I hope readers will find it equally fascinating.