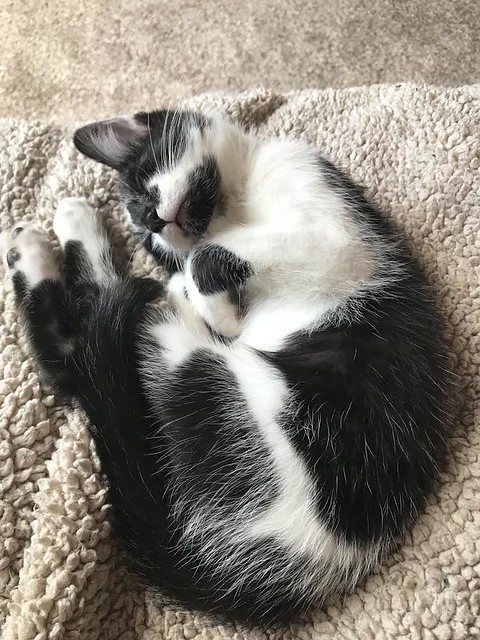 In other words, Smudge update! This little guy has been living it up here in the Scalzi compound and is being an adorable pain in the neck! He is the most playful kitten we’ve ever had, Sugar and Spice as kittens don’t even compare to how crazy this dude is. He loves chewing on cords, which is kind of an issue, especially since we have a lot of different chargers in this house. And he loves attacking literally any part of your body, not just toes, as most kittens do. He will straight up attack your hair or your thigh, totally unprovoked. He’s a real wild child.

But, as you can see, when he’s sleeping, he’s a little cuddly angel who does no wrong. He is also a major explorer! If you leave a door open, he will not hesitate to venture forth into the unknown. Smudge is also very unafraid of the other cats, even though they still largely dislike him. They hiss and bat at him, and yet he still charges at full speed towards them. He doesn’t take hints very well.

Well, anyways, enjoy this adorable picture of Smudge, and have a great day!