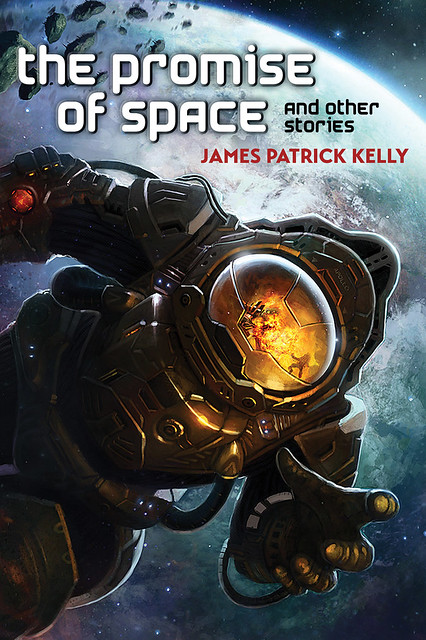 Today, Hugo and Nebula Award winner James Patrick Kelly is here to tell you why you need more short stories in your reading diet. And coincidentally, The Promise of Space and Other Stories, his latest collection of short stories, just happens to be out!

I rise in defense of the humble short story. My Big Idea is that you should be reading more of them. My Other Idea is that my new short story collection, The Promise of Space and Other Stories, might be a place to start. So here’s my case for upping your short fiction intake:

First: this is the Golden Age of short stories. There are more markets and more writers writing at top form than ever before. Yes, ever before. Of course, I know all about that Other Golden Age, which the Science Fiction Encyclopedia puts at roughly 1937 to around 1950. I grew up with a headful of Clarke, Asimov, Heinlein, Bradbury, Sturgeon, Williamson and Pohl. Hell, I even met some of them! I’m not saying that these writers were not some of the greatest of All-Stars. But I’d argue that we can easily match that lineup with a much more diverse roster of writers publishing today. Not only that, but our bench is way, way deeper. In addition to the skill of the current crop of writers, consider the accessibility of their fiction. Lots and lots of it is free. And it comes to you in multiple formats: print, print online and in the last few years, audio. Every month there are upwards of a hundred new stories published, wonderful stories that you may be missing.

Second: Stories are not short novels. Rather they are a different art form altogether. Look, have you ever skipped over a lyrical passage of landscapery in a novel because you wanted to get back to the plot?  Doesn’t happen in a story. Or how about that supporting character in an otherwise enjoyable novel who annoys you but whom the novelist can’t get enough of? No time for that in a story, because the clock runs too fast. Things have to happen ASAP in Storyland. In my revenge story “Soulcatcher,” in which a desperate clone hatches a plot to rescue her kidnapped clone sister, everything goes terribly wrong in about a half an hour of story time. And here’s the thing:  the more stories you read, the better a story reader you become ….

Third: … because a short story puts you to work as a worldbuilder. Because there isn’t time to spend (waste) describing the barren landscape of the desert world, or explaining the wizard’s necromantic rule book, the best short story writers leave hints and point at clues which encourage the reader to make up parts of the story for themselves. Of course, a story has to succeed at its most superficial level and the naïve reader should be able to get 80-90% of it on the first read. But as you improve your story reading skills, working through these subtextual prompts gives you a kind of ownership over the content you’ve added.  In my novelette “One Sister, Two Sisters, Three” set among the inscrutable ruins of a long dead alien civilization, the sisters of the title practice a religion based on recognizing Fibonacci sequence patterns in the universe. I’m trying to get you to start thinking about all those Golden Ratio coincidences too.

Fourth: Short stories are the most nimble kind of fiction. It’s possible for story writers to reflect late-breaking developments in our culture in near real time. Suppose there was some horrendous political anomaly and know-nothings found themselves in our seats of power. Story writers would be the first to publish If-This-Goes-On pieces of the literary resistance. What, that couldn’t ever happen? Okay then consider that if aliens land in Ohio next week, short form writers would be submitting work that reflected our new status in the universe while novelists were still sending proposals to their agents. Over the past year or so, I’ve read a lot of hyperventilating journalism about the coming of sexbots. Not that the idea is new, but now that the reality is around the corner, people are paying closer attention. Sean Wallace, my editor at Prime, required that my collection include an original story, so I decided to tiptoe into the minefield of gender politics with “Yukui.”

Fifth:  The best stories will have an unique and visceral impact. It’s not that novels can’t make you bleed, or cry or shout with joy.  They can generate all those amazing reactions, but in a more diffuse way. Every time you look away from a novel and rejoin your life, the dream dissipates. Because a story is most often a continuous and complete experience, you only emerge from it when the writer is done with you, for better or worse. But a good story doesn’t end at the last line. One thing I strive for are stories that resonate after you put them down. Maybe you’re still filling in the world that I sketched, maybe you can’t believe my protagonist would do that thing. Or else something in the denouement, that ending just past the plot’s climax, turns the story on its head. I teach writing and I love it when my students toss a reinterpretation bomb (imprecisely known as a twist ending) in the last paragraph. One of my personal favorite reinterpretation bombs comes at the last line of “Happy Ending 2.0,” a fantasy in which a formerly happily married couple get a chance at a do-over. Hijinks do not ensue.

Understand that I write novels too – six of ‘em, including last year’s Mother Go – but nothing saddens me more as a writer than to hear a reader say that she reads only novels. Don’t be that person, if only because your favorite writer more often than not writes amazing stories too. My Big Idea is that there are many, many strange and wonderful reading experiences that are shorter than 40,000 words. My Other Idea is that The Promise of Space is my sixth collection and that maybe I’m finally getting the hang of writing short.