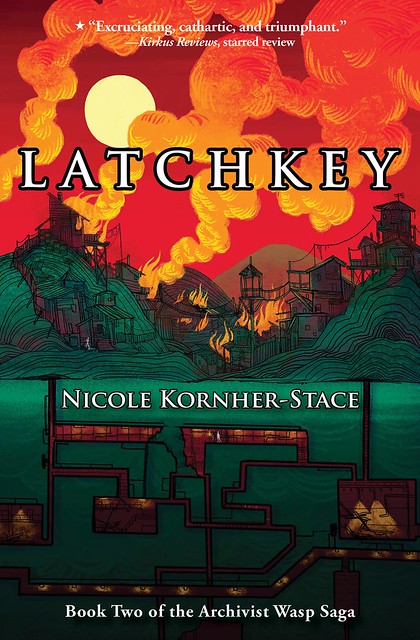 Nicole Kornher-Stace has some esoteric random influences for her novel Latchkey, which include a classic philosophical work, a popular video game… and a disease. Well, sort of for the last one. Here she is to sort it all out.

When I was eight years old, I had a teacher with advanced chronic Lyme disease. We knew this because she couldn’t keep our names straight — even by the end of the year — and she kept apologizing for it. She was, I don’t know, early forties at most, and yet her memory was eroding in a way that we, as kids, assumed was the eventual destiny of really really old people, not somebody just a few years the senior of my mom. I remember thinking: this is the most terrifying thing. Having your memory eaten by something you can’t even see. It immediately bumped whatever topped my 8-year-old fear-list down to number two. Tornadoes, maybe.

But I live in upstate New York, where you get Lyme disease like most people get colds. (I just read that a solid 50-something percent of tested ticks from 2017 around here were infected, so THAT’S FUN.) The first time I got Lyme was in my early twenties. I didn’t have the bullseye rash, so in my eternal optimism — the kind that only rears its head when you’re trying to get out of doing something deep down you know you need to — I convinced myself it was a particularly long-lasting nightmare flu, so I didn’t go to the doctor until at some point I emerged from my month-long fever haze and went you know, this probably isn’t normal. Nobody seems to be able to tell me if I still have it or if the antibiotics killed it in time. (Go to the doctor with unexplainable month-long fevers, people! Don’t be me!)

The first thing I thought when I was diagnosed is: oh shit, I’m going to turn out like Ms. ——. Unable to keep twenty names attached to faces anymore even after looking at them six hours a day, five days a week, for ten months. Surely I was too young to forget everything. Then again, so was she. Then again, so is everyone. I don’t care how old you are. That shit is scary.

So for a few years I’d tentatively probe the situation, the way you poke a painful tooth with your tongue. Is my memory crashing and burning or am I just tired? Or is it just because I’m pregnant? Or because I’m chasing a toddler around all day? Or am I too overworked? And so forth.

It entered the mixed bag of random unintentional influences that made up the world and characters of my 2015 YA debut Archivist Wasp and its 2018 sequel, Latchkey. And I do mean random. The most succinctly I can make this point is probably to say: the framework of the protagonist’s world landed in my head of a piece one day while I was reading The Golden Bough and playing Fallout 3 concurrently.

I say the protagonist’s world specifically because in these books there are three worlds in total. One is the Golden Bough-meets-Fallout-3 world in which Wasp, ghosthunter priestess, lives. In Archivist Wasp, she ends up going on a buddy quest into the underworld with a ghost she was supposed to capture and exploit, but instead cuts a deal with; the second world is the one this ghost comes from, a near-future society collapsing into high-tech all-out civil war. The underworld is the third setting in the books, and this underworld — along with the ghosts in it — is literally constructed of memory. Think personalized pocket afterlives sort-of like What Dreams May Come, except more crowdsourced, more interconnected, and you can travel between them easily, if you can find the doors. The memories that shape you as a person acquire physical form in the underworld. An area that’s richly realized, full of detail, is that way because it is built and rebuilt and reinforced out of the memories of many dead together. There are entire buildings, entire cities, based on these communal memories.

But ghosts, too, are made of memory. Here, think of residual self-image as in The Matrix. Except that the longer you stay dead, the longer you wander the underworld, the hazier and more fallible your memories of your life — and yourself — become. Eventually you lose your sense of self, your image of yourself, and you revert to a faceless silvery cutout, like a paper doll the approximate size of you. There are ways of regaining those lost details of your life, but it’s difficult, and almost impossible to do alone. The ghost that Wasp cuts her deal with has forgotten vast swathes of his life and has spent centuries making half-assed guesses at all those lost details, rebuilding the constellation of his past around a few bright remembered stars.

Without spoiling anything, memory plays an even bigger role in the sequel, Latchkey. And, hilariously, it took me until after I drafted the sequel to pinpoint where these books’ fixation on memory, and loss of memory, came from. I still mentally interrogate myself sometimes, giving my own memory little pokes to make sure it’s still running. I don’t really know how I’d know if it wasn’t. My memory seems to be as selective as my kid’s, which retains where you were and what you were doing when you said such-and-such thing, verbatim, but blanks entirely on what he did earlier that school day. For now, mine still has a stranglehold on: story notes, grudges, song lyrics I last heard when I was twelve, way more high school Spanish than I give it credit for, quotes from cartoons that I can insert into conversations at opportune moments of maximum obnoxiousness, etc. and completely drops the ball on: names, dates, what I went into a room for five seconds after entering it, etc. I say this to people and they shrug and go meh, sounds normal to me.

So maybe eight-year-old me was freaking out over nothing. Maybe all our memories are just weird jumbled messes, the mental equivalent of desk clutter or a crowdsourced underworld. For now, mine can hold its shit together long enough to write the exact books I want to be writing, and they’re getting out there and finding their readers, and honestly, that’s all I’d ever want to ask of it.