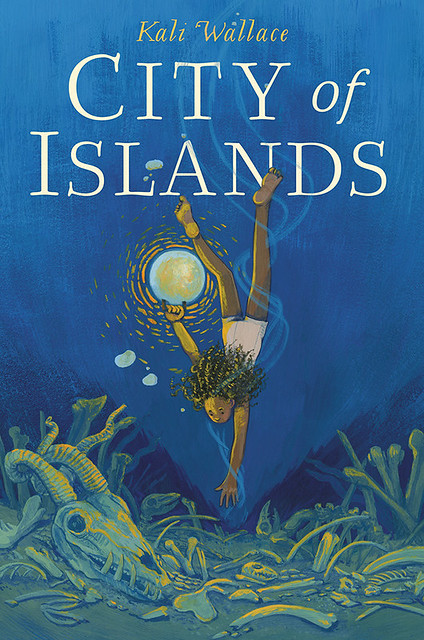 City of Islands is author Kali Wallace’s first children’s book, and in writing it, she was thinking about where the balances were in telling a story for children, and still telling a story with some complexity. For her Big Idea, she’s here to talk about finding that balance, especially in today’s times.

It’s an abiding theme of children’s stories: to have an adventure, you’ve got to ditch the parents and guardians. It might be a trope, but it’s one I’ve always rather liked. It’s always seemed to me the closest a story can come to capturing the moments a uninhibited, unsupervised make-believe of my 1980s go-play-in-the-ditch-behind-the-house childhood.

Mara, the main character of City of Islands, is a plucky orphan in a children’s fantasy novel. She lives in an archipelago city where magic is sung in music, and she dreams of learning magic herself. But being an orphan doesn’t give her freedom. It means she has to take care of herself, in a world that does not spare a whole lot of compassion for struggling children.

You see, too much supervision is not the only way adults can ruin a child’s story. There is also literally everything else adults do.

This is the first children’s book I’ve written, and I wasn’t quite sure how to balance the lightness and the dark. My agent had to tell me that perhaps opening a children’s novel with a giant pile of corpses did not quite strike the right tone. On a bigger scale, I wasn’t quite sure what kind of villain I needed. I didn’t want an evil overlord. All I wanted was somebody who could get away with his schemes because the other adults were too obsessed with their own status to see a monster among them. But I worried about how monstrous was too monstrous. I worried that a power-hungry villain who tore families apart and locked children in cages might be a little bit over the top. A little too mustache-twirling. A little unbelievable.

When fantasy writers talk about world-building, we talk about histories, political systems, belief systems, cultural mores, economies, geography. As I was writing, I made many world-building decisions to ensure the story would be welcoming to all kinds of children. The City of Islands is a multicultural port city filled with people from all over the world. There are a variety of skin colors, backgrounds, languages, and economic statuses among the primary characters; same-sex marriage is accepted and normal. There are no kings or gods, but there are imbalances of wealth and power. I wanted the world to feel wondrous and magical and strange, but I also wanted young readers to be able to imagine themselves going along for Mara’s adventures.

But there’s another aspect of this invented society that kept creeping into the story. I didn’t even realize I was doing it until the revision process, because I wasn’t used to thinking about it as a specific aspect of world-building.

I’m talking about the way a society treats its children.

The concept of childhood is neither universal nor static; it’s not even universal or static in the same place and time or in the same person. (Witness: people who demand their children be protected from harm at all costs while at the same time arguing that other children deserve the harm inflicted upon them.) The treatment of children in a society, contradictions and all, is always revelatory and rarely flattering. Through the process of writing and revising, it evolved into one of the central ideas around which I wove my story.

Twelve-year-old Mara must work to survive. She knows that parents and friends can vanish in the blink of an eye. She knows that adults lie, scheme, and betray. She wants to learn but education is largely out of reach for children like her. Experience has taught her there is little room for dreams in a world that considers children to be a cheap, easily replaceable labor force. She dreams anyway.

When I started City of Islands, I thought I was writing the kind of children’s story that can’t be told if there are responsible adults around to ruin the fun. A little dark, yes, and a little rough on its characters, but still a magical, exciting adventure. But it turns out I was actually writing the kind of children’s story that illuminates the ways in which adults fail children. That’s what I had been writing all along. It just took me a while to figure it out.

This is a surreal time to be launching a children’s book. Our world is dark and frightening, and children know that as well as anyone–or better, because they are too often treated as props in the grandstanding of cowardly, dishonest, venal adults. I wrote City of Islands to be a fun, exciting, and enjoyable story for kids, but I also want the darkness in the story to resonate with the children reading it in this very dark world in which we live. It seems like such a small hope, when the problems facing the world’s children are so huge, but I do hope they find a bit of courage and comfort in Mara’s story.

← Beat Saber: AKA the Coolest Game Ever
The Love-Hate Relationship With Travel →