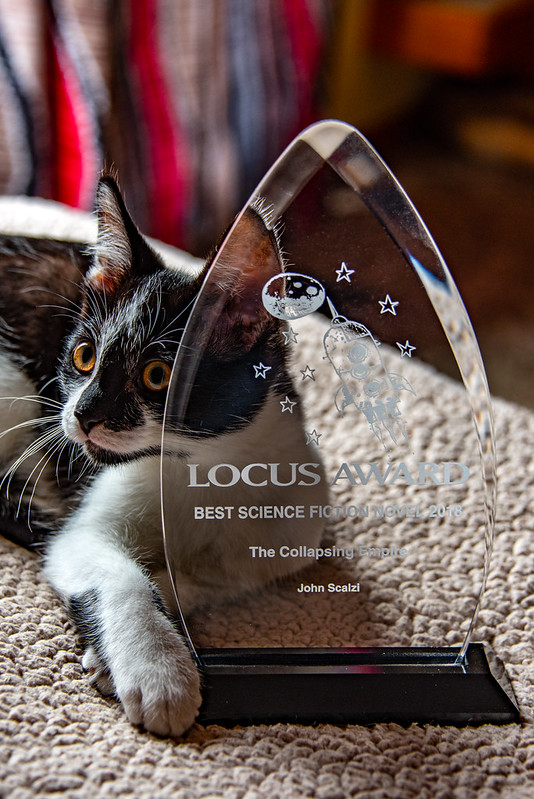 I was thrilled when The Collapsing Empire was announced as the winner of the Locus Award for Best Science Fiction Novel, but was not present for the ceremony because one of my best friends on the planet was getting married, and, well, priorities. Fortunately the good people at Locus were kind enough to ship it to me. I arrived yesterday, and what a pretty award it is, too. The art on the award comes from Hugo and Oscar-winner Shaun Tan, so that’s another reason to geek out about it too. And Smudge seems to like it, as you can see here. And clearly that is the most coveted endorsement. Thank you to everyone who voted for the book — I’m delighted to have this award at home.

On the subject of awards, we are down to the final days to vote for the Hugo Awards, for which The Collapsing Empire is a finalist for Best Novel, along with some other very excellent works from NK Jemisin, Kim Stanley Robinson, Mur Lafferty, Yoon Ha Lee and Ann Leckie (not to mentionall the other excellent people and works in other categories). The final day to vote is this Tuesday, July 31st, and if you are a member of Worldcon 76, this year’s Worldcon, I definitely encourage you to cast your ballot for the work you admire. The link to the online ballot is here. 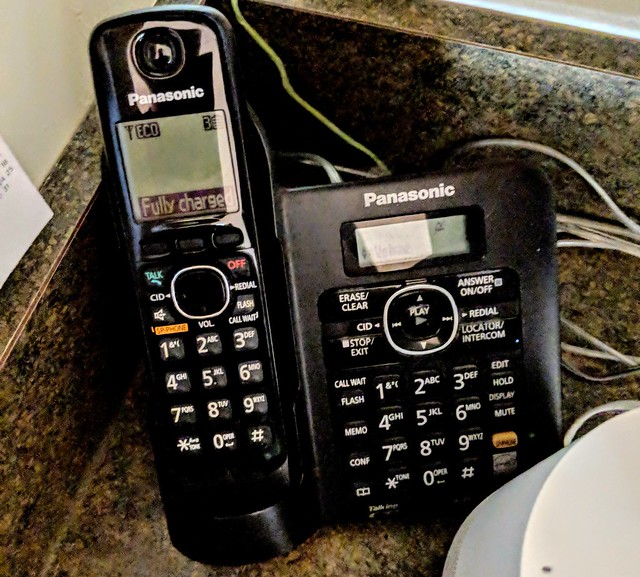 It sometimes amazed people that we here at the Scalzi Compound still have a landline. We do, basically because I receive (terrible, horrible, low-speed) internet service through my phone company, and it’s basically cheaper to bundle it with a landline than to get it by itself. And also, because if the power goes down, the cell phone towers go down too, but the direct phone lines (usually) stay up. Living in rural America, that makes some bit of sense.

With that said, in the last few years it’s become abundantly clear that the only people calling us on our landline were a) robocallers/telemarketers, b) dentists/medical offices reminding us of appointments, and c) my mother in law. And of those, the robocallers/telemarketers were by far the highest volume, even with the various laws, etc against them. Even though I’ve gotten to the point where I don’t answer the phone if I don’t recognize the phone number, the phone still rings and I still check. The rate of return on even that bit of action is super low.

So I’m not doing that anymore. As of today, everything gets forwarded to my Google Voice number (which I got, like, ten years ago or something). The legitimate callers can leave a message; the rest of them I don’t have to deal with, not even a ring (my mother-in-law will now just call Krissy directly on her cell phone). Google Voice emails me a transcription when someone leaves a message, so I don’t even have to check messages like a common schmoe. Simple, easy, and the end of the landline being a pain in the ass.

And! Since we’re not actually getting rid of the landline, we can still use it to make outgoing calls if we like (which I do when I’m doing phone interviews because the audio is generally clearer). So we get the few remaining benefits of a landline without having to deal with the negatives. Which is kind of the best case scenario.

(And as for the robocallers on my cell line — well, Google actually does a reasonable job letting me know who is likely to be a spam caller there, and soon will give me the option of not having suspected spam calls show up at all, so there’s that. Beyond that, at this point cell phones give one so much more customization regarding who gets to access you that once again keeping a landline in most cases is an exercise in futility.)

So if you were hoping ever to call me on my landline, sorry. That moment has now passed. I could call you, though. There’s still a chance!