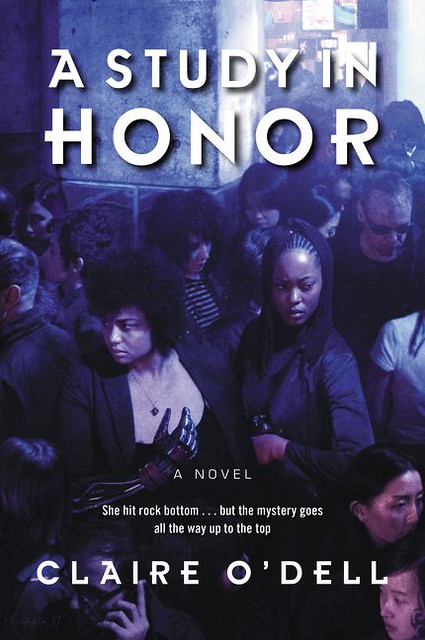 A dash of fan fiction, a smidge of authorial inspiration and a dollop of a world-famous investigator adds up to a brand-new concoction in Claire O’Dell’s novel A Study in Honor. How did this all come about? As O’Dell will tell you, it was elementary.

A Study in Honor is all Jim Hines’s fault. (Except for the parts that are all my fault.)

Back in 2014, Jim wrote a blog post about his experience writing fanfic. I’d never felt the tug of fanfic before, but after reading about how satisfying and involving it was for him, I decided to take a stab at writing some myself. After all, fiction is a conversation with itself, and what else is fanfic but a very intimate conversation?

Right away, I knew I’d want to write a Watson and Holmes story, but with a few changes. For one thing, I wanted to make them both black women. Why? Several reasons. Most (though not all) of the pastiches I’ve come across show Watson and Holmes as two straight men, or one man and a woman. And in those same stories, Holmes is always a white man.

So, Dr. John Watson became Dr. Janet Watson; Sherlock Holmes became special agent Sara Holmes. Both black. Both queer. One wealthy, and one who needed all her stubbornness to achieve a medical degree.

But the top reason is because of the other changes I made in the story. It’s the mid-twenty-first century when Dr. Janet Watson steps off the train in Union Station in Washington, DC. She’s newly discharged from the war–not the war in Afghanistan, though that would be plausible, but the New Civil War–a New Civil War that came about because the alt-right rebelled against equal rights for people of color, for gays, for women. The right viewpoint for such a war and its consequences logically belongs to a black queer woman.

I also wanted to do a deep dive in Janet Watson’s character, to make her more than an accessory to Holmes. This is a woman who has lost nearly everything in the war. Her parents died in a terrorist bombing. Her beloved abandons her. A sniper’s bullet shattered her arm when the enemy overran her medical unit, and the replacement prosthetic is unreliable.

A surgeon needs two reliable hands, she thinks. Not one of flesh and one of metal and false memories.

Her plan is to argue with the VA for a more modern device, so she can resume her career as a surgeon. She expects to stay in DC only a few days, a week at the most.

Her plans get upended the next day. The war has wreaked havoc with the economy on both sides, the VA tells her, and prosthetic devices such as Janet needs are scarce. She will have to wait her turn. Jobs aren’t easy to come by, however, and housing costs more than she can afford. When a friend tells her about someone who needs a partner to share the rent, Janet reluctantly agrees to meet the person.

That person turns out to be special agent Sara Holmes, a quirky, brilliant woman somewhat given to ignoring boundaries. The apartment in question is #2B at 2809Q Street, in an upscale neighborhood. Janet has reservations, but oh, the apartment would make a lovely refuge.

All of that poured out of me as fast as I could type. By the time I had three chapters written, I knew Janet would not let go of my imagination until I finished her story. She is stubborn and smart and defiant. The war might have left her wounded in body and mind, but she’s not going to give up. As she writes in her journal: