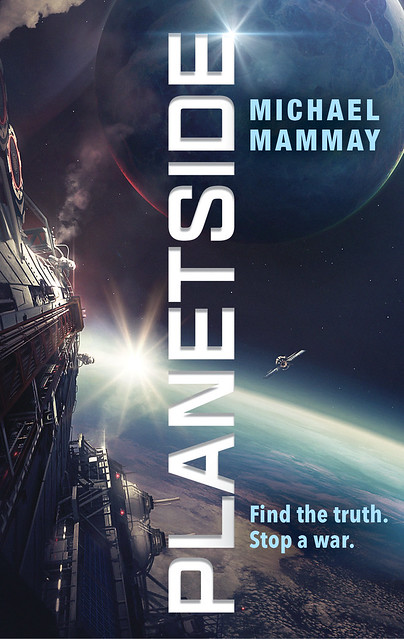 Trust in your friend, colleagues and superiors is a good thing… mostly. In Planetside, author Michael Mammay considers the price of loyalty and the cost of trust, and how both can end up being different than one might expect.

The big idea that became Planetside started with a conversation I had with another officer while deployed to Afghanistan. It was early in 2014 and we’d been there six or eight months on that particular tour, and for whatever reason we were sitting in his office one morning and talking about people we’d worked for before, and our list of generals who we’d work for again if they called, no questions asked, no matter the job.

As a relatively senior officer (I had 24 years experience at the time) I’d had the chance to work for some amazing people. Forget the television stereotypes of the uptight or inflexible leader. I’m talking about generals who are so smart, so charismatic, and so driven that you’d literally do anything for them. Leaders who know people, and how they tick. They give an order, and you want to follow. They get the most out of everybody around them, and get everybody moving toward the same goal.

That might sound like a problem, that kind of personal loyalty, but it’s not. The reason that these particular leaders are so good is that you trust them. If they were the type of person who would abuse that trust, then they wouldn’t be on the list in the first place. You trust that they’ll put you in situations where you’re going to be successful, because they know you, your strengths, and your limitations. You trust that they would never ask you to do something that went outside the morals or standards of the organization.

But what if they did?

That was the idea that came to me later that day. It’s not based on any real situation where I saw it happen, but rather the idea that it could happen. What if somebody that you trusted, that you’d do anything for, asked you to do something messed up?

That’s the big idea at the center of Planetside. In the first chapter, Colonel Carl Butler answers a summons from General Serata, one of the generals on his list of people he’d follow anywhere. They’re more than leader/subordinate. They’re friends. So even though he doesn’t understand the details of the mission at the time, when Serata tells him that he’s the right guy to handle it, Butler trusts that. It’s not a job he wants, but he signs on because it’s Serata asking. And he is asking. He could have simply ordered it, but he’s got too much respect for Butler to do that. Butler, while subordinate, is a senior officer who has earned that kind of deference. At the same time, Serata knows him well enough to know that he’ll say yes.

Of course there’s more to the mission than initially meets the eye. I mean, it wouldn’t be much of a book if there wasn’t. As he gets deeper into his investigation and the difficulties present themselves, Butler starts to understand more clearly why Serata chose him for the job. To get to the bottom of things, he needs to be able to maneuver in both the political landscape of the base and in the war-ravaged landscape of the planet itself. He has both skill sets, which is rare. Most people have one or the other. Both locations hold secrets. It’s debatable which is more dangerous.