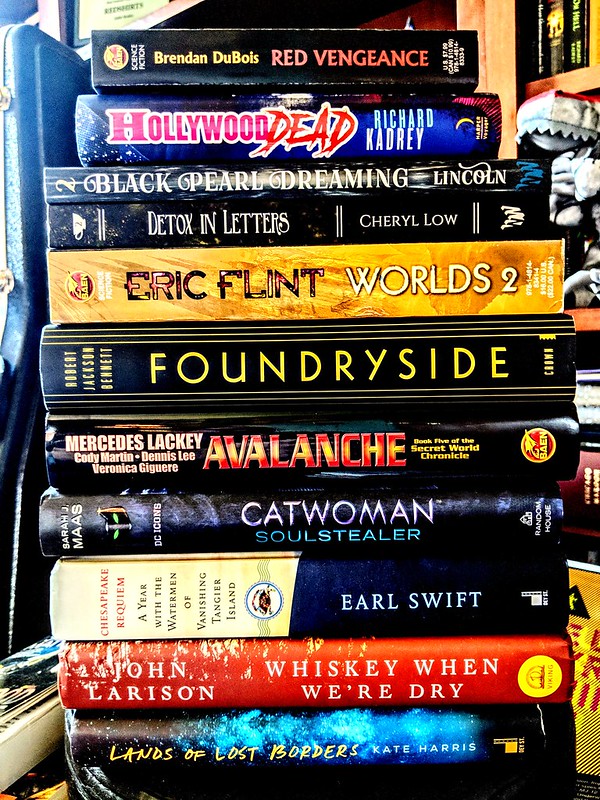 As we’re easing into the first weekend of the last month of summer, here’s a nice, varied stack of new books and ARCs that have come to the Scalzi Compound. What is making your eyes say “yes”? Tell us all in the comments.

Hello, everyone! Today I will be sharing a short story I just wrote the other night for class. It had to be two and a half pages long, no more, no less, which was kind of difficult to make it fit perfectly into that amount of space, mostly because of pacing issues. This is also a very dialogue heavy story because I wanted it to be more about the interaction between the two characters than anything else.

If you’ll remember a couple weeks ago I posted about what I imagine Death to look like, and how he’s a character in one of my stories. Well, this is not that specific story but I decided to use the same Death character in this piece because I love him.

Anyways, here’s the story, I sincerely hope you enjoy it. Please let me know if you have any questions about Death or anything, I love talking about him! And as always, have a great day!

I posted a thought earlier on Twitter today and I’ll repost it here in non-tweet form:

It’s really frustrating to me that more people don’t understand that racist/alt-right people have gamified their rhetoric; they’re not interested in discussion, they’re slapping down cards from a “Debate: The Gathering” stack, and the only goal is taking heads.

They gamify their rhetoric because essentially this shit is a low-stake game for them, whereas for other people it’s their actual lives. That’s an advantage they have. If they lose, they shuffle their cards and go on to the next thing. If others lose, their life takes a hit.

And because their rhetorical strategy is essentially card-based, actual knowledge of issues is unimportant and probably a hinderance. They don’t want or need to understand the issues that affect others, they just need you to play their game so they can win.

I don’t have time anymore to entertain children who think other people’s lives are some sort of turn-based game, especially when all they want is to hurt other people. And it bothers me more people, especially those with power, don’t understand this shit.

In sum: Understand what these folks are doing. Refuse to play along. And if you choose, point out to others the hollowness of their game. Because their “game” is to hurt other people, and then go on to the next target. Their game is other people’s lives.