The real reason I have come to California is for one thing and one thing only: In-N-Out. A.K.A. the greatest burger place ever. No burger place, nay, no fast food place can compare to the glorious burger joint known as In-N-Out. It is truly a shame that they are only on the Western part of the country, but that makes them all the more special when I get to come to this side of the country.

Their menu is small, only a couple of items to choose from, but each item is perfect in every way. My personal favorite thing to order is a cheeseburger, animal style. Their sauce is amazing, an absolute revolution in burger technology. Yes, I know it’s pretty much just Thousand Island sauce, but it works, and it’s amazing.

If you haven’t had In-N-Out before, and you have the opportunity to, DO IT. And get a cheeseburger. If you don’t get the cheeseburger animal style, at least get the fries animal style. Or both! Both is good.

To be completely fair, though, the fries are generally undersalted. This is why I recommend them animal style. They’re really good when it comes to texture and done-ness, but yeah, needs more salt. HOWEVER, this is the only fault I have found with In-N-Out.

So, yes, try all you wish to convince me that Whataburger or Five Guys is better, but you shall ultimately fail because I know in my heart what is true.

So, I don’t know if you know this, but next month will mark the 20th anniversary of the existence of Whatever. This is a fact that among other things is causing me both practical and existential reflection on what this place is, and what it means to me, and what is the best way to keep doing it moving forward, particularly in an age where “blogs” are not the center of online gravity that they used to be. To be clear, the site isn’t going anywhere — I’m not thinking of shutting it down or not writing here or such. But I am doing a serious think about what I want this place to be, for me, and for others.

Also, this August I’m traveling quite a bit — to San Jose for Worldcon 76, where The Collapsing Empire is a finalist for the Hugo, and then the weekend after that to Albuquerque, where Mary Robinette Kowal and I are Guests of Honor at Bubonicon. So for two weeks this month I am entirely out of pocket with travel and events and seeing in the real world people that I like spending time with. This isn’t a bad thing! But it does have an effect on my online presence.

Also also, in a larger sense it’s time for me to have a think about my overall time management — how to balance things I like doing and things I have to do and the things I want to do, along with the day-to-day aspects of, you know, actual life. The last couple of years have not been great for how I allot my days and energy, which is also not great because the last couple of years have been some of my busiest. It’s great to be busy as a writer! But not so much when you’re exhausting yourself because you’re not working efficiently with your time.

What does this hemi-demi-semi hiatus mean for you, the Whatever reader?

* No Big Idea pieces for the rest of August (my workflow for these pieces is a key thing I need to work on);

* Not a huge number of thinky pieces from me. I expect mostly to post updatery (Worldcon/Bubonicon schedules, book-related stuff) and pictures of sunsets and cats. I’ll post other stuff if the mood strikes me, but I’m not expecting the mood to strike me much.

* Athena will be continuing her internship and posting, but is also winding down her presence (she goes back to school this month). Enjoy her thoughts here while you can!

I’m not calling it an official hiatus mostly because I have enough going on that it doesn’t make sense to go away completely, but I also don’t want y’all to worry if you don’t see me posting a lot here between now and September. So: hemi-demi-semi hiatus. It’ll be relaxed around here in August, basically.

And now, to end on a high note: Smudge. 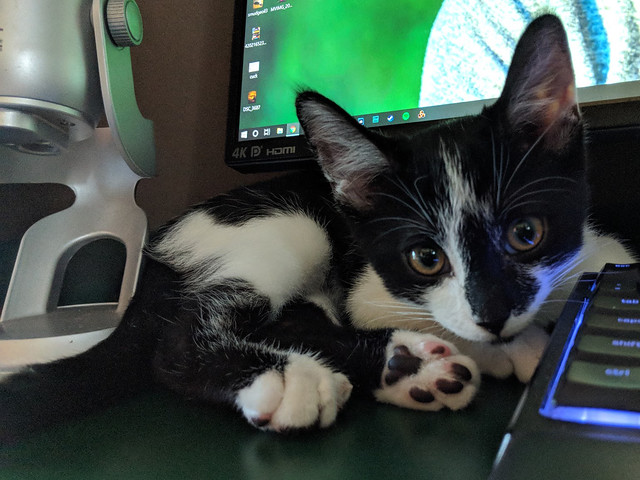