We Interrupt Your Monday For This Very Important Picture of Smudge 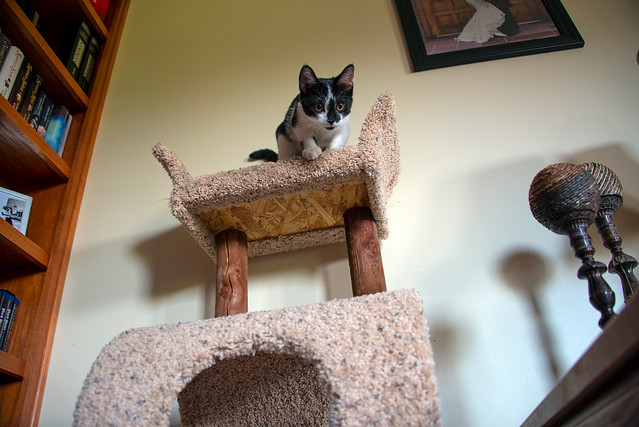 I think we can all agree that this has been a vital and necessary update.

For those of you asking how well Smudge is being assimilated into the Scalzi clowder of cats, the answer is: reasonably well, but not without its problems. Smudge basically has two personality settings at the moment, “adorable” and “asshole,” which is about par of kittens generally, but even more so for him. This duality of his nature has definitely been noted by the other cats, who have varying levels of tolerance for him. Zeus is generally the most tolerant of him, and will wrestle with him for a while before he gets tired of it. Spice will also wrestle with him, for a much shorter period. Sugar is all “I will fucking cut you” when he approaches her for a tussle, and he backs away sensibly. Otherwise, he’s fearless and underfoot, which again is to expected in a kitten.

The things Smudge is the most frustrated about is that the other cats go outside and he can’t. He can’t because he’s still too small and could be marked as a snack by local raptors. The other cats go outside to do their thing and also (it has to be said) to be shut of Smudge, who can be relentless in his attention-seeking. But I don’t see giving Smudge outdoor privileges for another several months. We expect him to be a fairly big cat, so it might happen sooner than later. But for now when Smudge makes a beeline for the door, he finds them closed before he can get to them — or if he’s at the door when it’s opened he’s picked up before he can escape. It’s frustrating for him, but better alive and frustrated then a snack for a hawk.

And this has been your Smudge update for the day. Thank you for your attention.