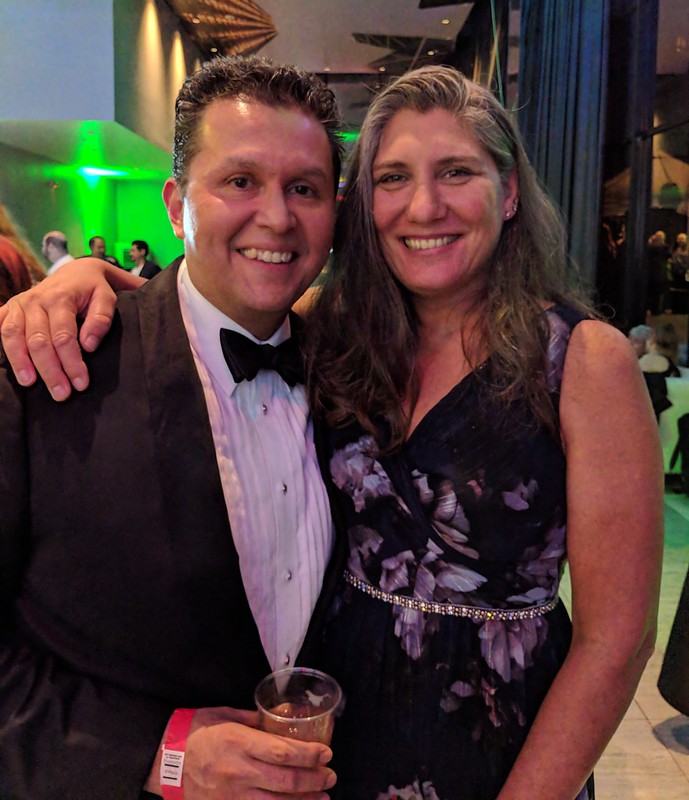 Krissy and John Picacio at the Hugo Loser’s Party

Now that I am comfortably ensconced in the hotel for Bubonicon 50 and will not be required to drive or appear anywhere else for a few days, it’s time for my Worldcon 76 recap. Here are some thoughts, in no particular order:

* It was good! I enjoyed myself tremendously over the course of the convention, thanks to friends and to the fact that downtown San Jose was surprisingly (to me, anyway) walkable and full of good restaurants and bars. There was always something to do and great people to be met. I was never bored and I never felt like I wanted to be anywhere else, which means that this convention was a success on a personal level.

* In terms of my own programming and events, my own highlight, not surprisingly, was the 80s dance that Worldcon 76 graciously allowed me to DJ on Thursday night, after the Retro Hugos. As it happened, the Retro Hugos theme included several dance interludes with music from the 50s, 60s and 70s, so the people who attended the Retros were both already in the mood for dancing and primed to segue into the 80s. The dance was well attended and there were people on the dance floor from the first song to the last, two and a half hours later. So if you went to the dance, thank you for making it a success, and if you didn’t, well. You missed out.

For my other programming items, the first was the actual Retro Hugos ceremony, where I played a character in the futuristic skit that accompanied the awarding of the trophies. I hammed it up and that seemed to work out fine. I also had a reading with fellow Hugo Best Novel finalists Mur Lafferty and Ann Leckie, where we all read from upcoming works. I thought that also went well, although we were in a room that was roughly three sizes too small — too many people who wanted to see us weren’t able to, and that is my only real complaint for the convention. Next up, I moderated a panel on Near Future Fiction with Annalee Newitz, Sarah Pinsker, Linda Nagata and Stanley Chen; where they were all very smart about what it takes to write fiction set not too far from the present. I also moderated a panel called “Author vs Fan Ownership,” with Renay WIlliams, Foz Meadows, Eric Kaplan and Greg Hullander, which was (heh) quite spirited and also included me calling out Cory Doctorow for making a comment rather than a question from the audience (this was funnier than it sounds, and Cory and I giggled about it later).

* There were meant to be protests at the Worldcon, and there were, of a sort, but they were mostly a bust. The alt-right fascist dumbasses who came to protest were corralled into one corner of the square in front of the convention center, where they were obscured from the street view by a bloodmobile. No one seemed to notice them much. The antifa protesters who came were corralled into a separate corner, and no one seemed to notice them much either. The police mostly stood around and got paid to do that. At 4pm, they apparently all went home. Certainly there was no disruption of the convention itself. In one of the least surprising twists of all time, one of the instigators of the protest was nowhere to be seen at the protest; he instead popped into the convention center a day before and walked around aimlessly until he was caught and punted out, again, to absolutely no consequence to the convention itself. So much for that nonsense.

* The Hugos were delightful, both because I approved of nearly all of the winners and also because emcee John Picacio’s philosophy of the Hugo ceremony was, basically, “Let’s get people their rockets and then go party.” Which is a philosophy I wholeheartedly embrace. The ceremony was done in two hours flat, which may be a record and is impressive considering there were new awards given out. As noted earlier, I did not win the Hugo category in which I was nominated, but I didn’t expect to and was thrilled with who did, so it was all good. And I came in second, which was a pleasant surprise. I’ll take it. I note the usual whiners complained about who won (the fiction categories were all won by women), but, you know. Fuck those pissy little manbabies right in the ear. All the works that won were eminently deserving of their awards, and all the pissy little manbaby whining doesn’t change that simple fact. I was going to write more on this topic, but on further thought, “fuck those pissy little manbabies right in the ear” is really all they deserve. Others complained about NK Jemisin’s acceptance speech, but personally, I thought it was great, A+++, would watch again. And at the end of it all, the Hugo Loser’s party was epic fun, and everyone went away happy.

So, to wrap up: Worldcon 76: A really nice Worldcon. I’m glad I went. And now I’m looking forward to the Worldcon in Dublin, quite a lot.