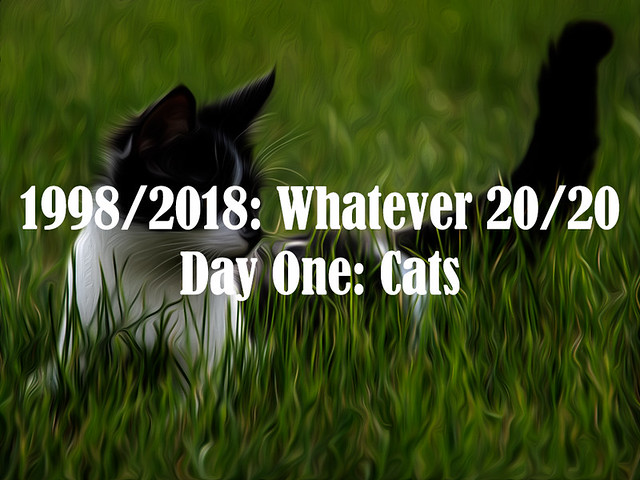 Over the course of 20 years, I’ve had seven cats, roughly grouped into three generations.

The first generation of cats was a single cat: Rex, who I acquired in 1991 from my sister Heather. Heather and her children came to live with me for about a year when she was getting a divorce from her then-husband and needed a place to live; Rex, a kitten, came along as part of that package. Rex was not stupid and apparently realized that I was the one paying for his kibble, and also, my room in the apartment was entirely toddler-free, so he glommed onto me. When Heather and her children departed, he stayed.

By 1998, when for the purposes of this exercise our story begins, Rex had gotten quite comfortable living with me and Krissy, and had also gotten rather chunky — something like 30 pounds. When he got a urinary tract infection our vet ordered him on a low-fat, low-ash diet with no more than half a cup of kibble a day. That lasted until Rex tried to kill me in the night by climbing up on my bed and suffocating me with his furry bulk as a protest for the diet cat food. I took the hint, fed him what he liked, and expected him to expire in a year or two. Possibly out of spite, he stuck around through 2005.

By that time, two members of the second generation of cats, Lopsided Cat and Ghlaghghee, had joined the menagerie at the Scalzi Compound in Ohio. Lopsided Cat we acquired when he walked into the yard while Krissy and three-year-old Athena were tending the garden; he walked over to Athena and when she knelt down to pet him he hopped on her back, and that was pretty much that. He had been someone else’s cat (he had been neutered) but I suppose either he had been abandoned or he had decided to trade up. Ghlaghghee (whose name was pronounced “fluffy”) came to us when a neighbor knocked on the door, said “here’s that kitten your wife wanted,” presented me with a small handful of fluff, and then walked away. In fact Krissy had not said she’d wanted a kitten, but inasmuch as I had taken receipt of the thing, it was too late for takebacks.

The second generation of cats got its final member when Zeus showed up at our garage door on the coldest night of 2008, mewling piteously for food and warmth. We’re suckers and we took him in. Zeus, Lopsided Cat and Ghlaghghee formed a fairly stable trio for the better part of the decade, with well-defined roles: Lopsided Cat was the Cat’s Cat, sort of the platonic ideal of a cat, who kept the house largely vermin free (we’re surrounded on three sides by agricultural fields, and without cats the field critters eventually head indoors). Ghlaghghee was a pretty princess who ruled the house with an iron paw. Zeus was the adolescent comedy relief. Ghlaghghee became world-famous when I taped bacon to her; she was written up in the New York Times and the Washington Post among other places. The other two cats did not seem to mind her fame. 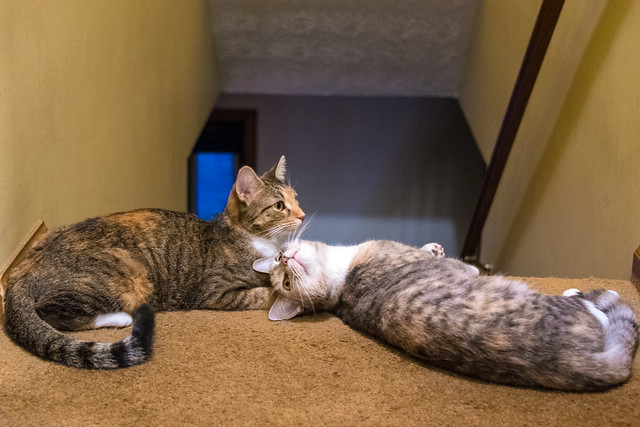 Of the second generation of cats, Ghlaghghee was the first to leave us and did not meet any of the third and current generation, and Lopsided Cat passed away within the same week of us acquiring the first two members of that new generation, Sugar and Spice, sister kittens who we famously dubbed The Scamperbeasts. Zeus, now the sole surviving member of the second generation, rather grumpily took on the role of the elder cat, first schooling the Scamperbeasts and now lately acting like an exasperated grandfather to Smudge, the (we think!) final member of the third generation of Scalzi cats, a kitten who very like Zeus came to us out of a nearby field looking to be rescued, accurately figuring we were too soft-hearted not to take him in.

It means we currently have four cats at the Scalzi Compound, which to my mind is one more than we absolutely need. Three seems to me to be the ideal number. But then I look at Zeus, now the elder cat, and I realize that all-too-sooner than later that “problem” will take care of itself. Maybe in the meantime I should enjoy these furry folks while we have them.

Which is of course the problem with cats, and pets in general: They don’t last. If you’re lucky you get a decade and a half with them, give or take a couple of years. Then they pass along and you have a cat-shaped hole in your heart for a little while. New kittens and cats can help that heal, but you still miss the ones who are gone.

As it happens, Rex and Ghlaghghee and Lopsided Cat are still here with us, in their way. Rex’s cremated remains are in a lovely urn that a Whatever reader made for him, and the other two are buried beneath the oak tree in the back yard, which is appropriate inasmuch as the spent nearly their whole lives in sight of that tree. They’re home. I find that I miss these cats of mine as much as (and in some cases more than) humans I’ve known in my life. They’re all people. And these people lived with me and were part of my family.

Here in 2018, it’s interesting watching the four cats we have configure themselves into their own sort of family unit. Zeus is the cranky elder, Sugar is the standoffish queen, Spice has taken up the mantle of the great hunter, and Smudge… well, he’s still figuring out what he wants to be when he grows up, and in the meantime he runs about with fearless and some would suggest heedless kitten energy, running head first into the other cats whether they want that or not. It’s fun to watch them tolerate him, until they don’t. He doesn’t seem to mind. 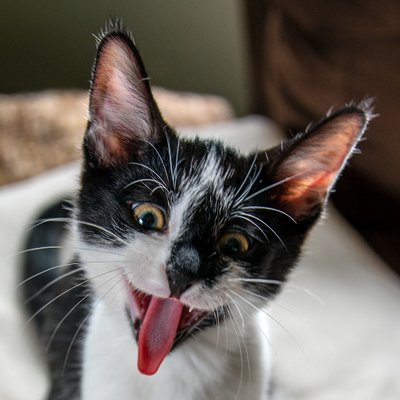 The configurations of the cats at the Scalzi Compound over the years, and the dynamic of the generations, have helped to give shape to their time with us, and ours with them. Over the course of these 20 years, we’ve never not had cats, but the cats are not interchangeable. They’re all their own people and have their own personalities. I would never confuse Rex with Zeus, or Ghlaghghee for Spice. I miss the ones that are gone, and am glad for the ones that are here now. Even when one of them is, as Smudge is literally doing right now, attempting to dismantle the chair I’m sitting in with his teeth. It’s not going to work. But it’s fun to watch him try. 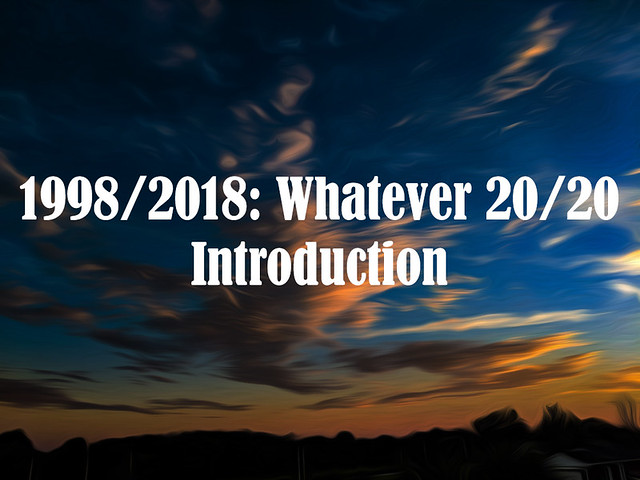 As most of you probably know by now, September 2018 will mark the 20th anniversary of Whatever, the blog you are reading right at this very moment. Twenty years is a very long time to be writing anything; it’s a long time to be doing anything at all, to be honest. I wanted to commemorate the milestone more than just waiting for the day (the 13th, actually) and noting it then. Something a little more concrete, that marks the passage of two entire decades of time.

What I decided on is this: Whatever 20/20. Every day of September 2018, I will pick a topic and then discuss it through the prism of two decades of time, from 1998 through to today. Some of these topics will be intensely personal, and about me and my life, and some will be more general, looking at how the world has changed over the course of these two decades. Some topics will be frivolous and silly, others more serious. As with everything on this site, the topics will be, well, whatever I feel like writing about. This is how the site works! This is, in point of fact, how it’s always worked.

This retrospective in many ways is just for me: It’s about me looking back on these last twenty years and the changes that have happened, and my thoughts on the passage of that time. It’s me observing myself observing the rest of the world. It’s going to be, and maybe has to be, a bit self-centered. Nevertheless I hope that as we go through the days of September together, you’ll find things in the writing that resonate with you as well, and that from time to time you will be inspired (or irritated enough, depending) to add your thoughts in the comments. We all went through the same twenty years, after all, providing you are older than twenty years old. Let’s talk about them, if you like.

(This retrospective is aided by the fact that for the large majority of September, I will be at home and not traveling, so I will have time to actually write 30 entries with accompanying art. And yes, “travel” will definitely be one of the topics I write about this month. It’s a thing.)

(Also: On September 13th, the actual 20th anniversary of Whatever, I will have a special announcement. Be looking for that.)

So that’s the plan for September. I hope you’ll read along.