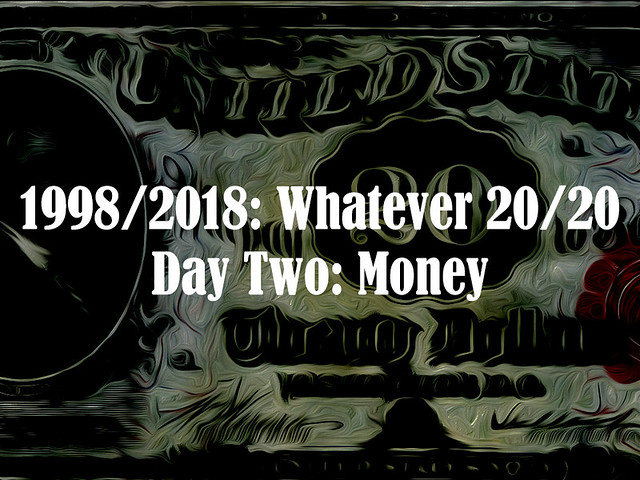 First, a little relevant history, which is that I grew up mostly poor with high volatility within a certain range of income. There were stretches of middle-class comfort, largely related to when my mom was in a functional relationship, and longer stretches of actual grinding poverty when she was not. Every now and then we would be (briefly) homeless. I caught a number of breaks in there, most notably getting a scholarship to the Webb Schools, a private boarding high school, and then admission to the University of Chicago (with additional scholarships, grants and loans). These two places gave me stability in an unstable time and did what education was supposed to do, which was punt me into a middle-class, white collar existence. I’ve not been poor by any estimation since I left college.

Which is not to say that I didn’t have my moments of doubt. And in fact in September 1998, financial things, if not exactly precarious, were also not exactly stable, either. In March of 1998, I had been laid off from America Online, where I had been the in-house writer/editor, and rather than look for another tech job in the Washington DC area where I lived (or a journalism gig, which might have been a possibility at the time), I decided to do freelance work. AOL shed people like a dog sheds fur, and they would go to other tech companies, and then need copywriting work done. Very often, I would be the first writer on their list to contact because I was in fact the only writer they actually knew. I didn’t mind.

Freelance work can be profitable, particularly if you’re doing marketing and PR work for tech and financial services firms, which I was doing. But it’s not stable; you don’t know when the jobs (and therefore, the money) would come in, or where from. It’s difficult to budget and difficult to estimate how much money you might make in a month, or a year. I did well financially from freelance writing when I had work — but who knew when and if that work would go away?

Fortunately for me, and us, we had two solid advantages going for us in 1998: One, when I was laid off at AOL, the firm where my wife worked part-time was so worried about losing her that they put her on full time and gave her full benefits, giving us a middle-class income and safety net to work with. Two, in 1998, Northern Virginia real estate prices had not yet become absolutely ridiculous, and I had an uncle who would co-sign a mortgage. We bought a house that it was possible to finance month-to-month under Krissy’s sole income, along with most of the essential bills (i.e., electricity and water and groceries). We used my income for things like Internet and cable and other optional expenditures, and socked away the rest of it into savings and retirement accounts, as a hedge against when (not if, when) my freelance work dried up.

The whole “live within Krissy’s income” concept was one that has lasted us, at least in theory, through to the present day. Krissy has always had a full-time middle-class job with benefits, which has served as the bedrock of our financial planning. If we had to, we could still live within Krissy’s annual income, since her income could pay for the things we can’t live without (food, electricity, heating oil, gas for the cars, property taxes on the house, which is — hooray! — paid off). We would have to cut back on expenditures like travel and other optional spends, rather significantly, but it could be done. I should be very clear that we have always been fortunate that Krissy has been able to find and keep those middle-class jobs, which meant that my income, whatever it was in any given month or year, could be the engine of our long-term savings and our short-term, less-than-absolutely-necessary expenditures.

Krissy and I have also benefited over these last twenty years from the idea of “sufficiency” — the idea that a certain standard of living was enough. Both Krissy and I grew up without a whole lot of money, so the lifestyle that we have now, which tracks with “upper middle class,” is more than enough for us. We buy nice things, and then we keep them until they have to be replaced, which is why our current cars are a seven-year-old Mini and a fifteen-year-old Honda Odyssey (absolute honesty requires me to admit I buy more digital gadgets than I need to, but in my defense even then I’m drawn to value over flash, which would explain the relative lack of Apple products in the house). We shop at places like Kohl’s and Krogers. We live well for us, and we also live well within our means. Which again means that we can take much of the money I bring in and sock it away, for retirement and as a hedge against bad times.

But surely there are no bad times coming! You’re a millionaire now, Scalzi! You’ve made it! Sure, and we can all go down a list of people who have millions to their name and have lost it all. Some of those people are people who have stories not too dissimilar to mine: They’ve come out of poverty, and then gotten themselves some money. They then didn’t know how to manage that money or the temptations that come with it, and soon enough found themselves out of money. This is an endemic story for lottery winners, professional athletes, and other celebrities. Money is really easy to spend; that’s what it’s meant to do. It doesn’t matter how much of it you have; if you’re not careful you’ll lose it all. We’re careful with it, and we have to remind ourselves to be careful with it.

Because that’s the other thing which people don’t appreciate, but which I, because I was a freelancer, and because I lived through streaks of both middle-class living and poverty, am very aware of: Nothing really is stable when it comes to money. The money can be there one year and not another. The contracts can be there one year and not another. The book sales can be there one year and not another. I’m three books into a thirteen-book contract that (provided I publish on schedule) will regularly keep money flowing to me for a decade — but who knows what happens then? I’ll be in my mid-50s when that contract is over. There is still all the rest of my life after that. Think of the “big name” authors (or actors, or musicians, or whomever) from a decade ago who you have casually wondered what has become of them. And the answer is, oh, they’re still around. Hopefully they saved their pennies.

I should also be clear that I never expected the kind of money I have now, in part because I know intimately the realities of making a living as a writer and a freelancer in the United States, and I’m aware of just how much of my success as a writer, from the beginning, has been due to luck. In 1998 I expected that I would be working as a freelance writer for tech and financial firms, and occasionally magazines, newspapers and online sites. If I wrote books — if I ever wrote books — it would be as a sideline. I didn’t expect that writing novels would ever be my full time gig and that I would do as well financially as I have done with them. Old Man’s War, the first novel I ever sold, went for $6,500 in 2002, and I thought that was pretty nifty. It was well below what I was getting for non-fiction books (I got paid three times that for my online finance book in 2000), and knowing what I did about fiction writing, I didn’t expect to get much more than that, ever. I was wrong about that, but I wasn’t wrong for assuming that I would never get rich from writing novels. Most novelists don’t, even some of the bestselling ones. You couldn’t trust it.

And I suppose that’s the thing about money for me, over the last twenty years: I’ve been lucky in the getting of it, but ultimately I’ve never trusted it. I think of all the ways it could easily go away — and likely will — and it makes me more careful with the money I have been fortunate enough to get during that time. Some of that distrust comes from having been poor. Some of it comes from being a writer. And some of it, I think, just plain comes from knowing what money is and how we’ve tuned our world to make the acquisition of it — a thing that is ultimately a fictional construct of value — a paramount goal, to the more-than-occasional exclusion of sense and sanity. I know that money, to the extent it can be said to want anything, wants to leave me. Part of my job is getting it to leave on my terms, not on its own nor anyone else’s. This is a part of my job I didn’t know I was going to have.