First, the kitten in the trashcan, because you always lead with the “A” material: 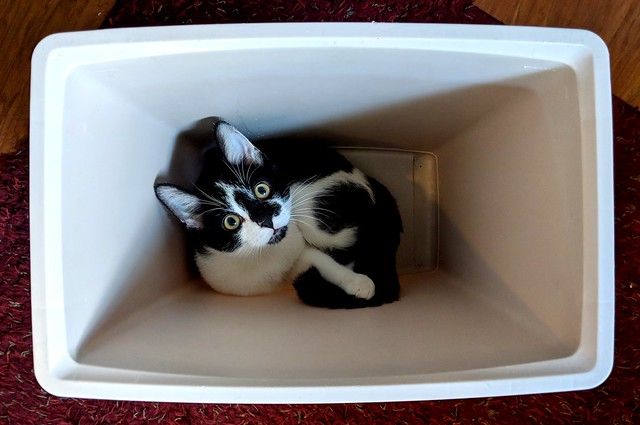 Why is the kitten in the trashcan? IT KNOWS WHY.

(And also, because kittens are kitten-y, and Smudge is more kitten-y than most, and jumping heedlessly into trashcans is just a thing kittens do.)

Second, for the non-holiday weekdays of September, I’m going to trying something that’s actually old here at Whatever. When I started the site, I would write a single daily “digest”-style column, covering (more or less) three to five topics and dedicating (more or less) two or three paragraphs to each, separated by asterisk breaks. It was a convenient way to organize things because I could cover a number of topics, but devote only the amount of space to them I thought was interesting and relevant.

I’m going to give this format another try through this month, for a couple of reasons. One, because at the 20th anniversary of Whatever, I think it’ll be fun to go a little retro for September, and two, because I think a digest-like column might actually fit my mind space these days more than discrete, longer pieces. Because of paid work and other factors, there are some subjects (like politics, but not only politics) that I’ve been avoiding here recently, and this format could give me an easier entree into them than needing to compose a longer piece on the topics.

These pieces will go alongside the Whatever 20/20 pieces and the several Big Idea pieces that will be up this month, so if all goes to plan there should be a fair amount of writing here in the month. And after September — well, let’s see how things go. If the digest format works for me, I’ll continue with it, alongside other things.

The point is, for me, I like writing here, and want to find ways to keep it interesting for me, and for you, while still keeping up all the other writing commitments that I have these days. Let’s see how this idea does for us all, shall we? 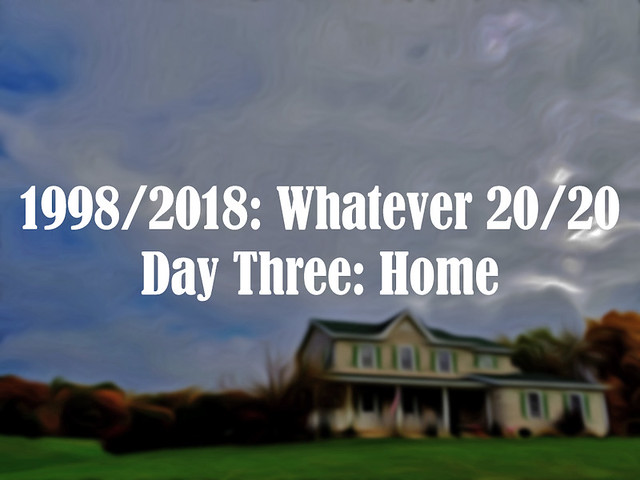 In the last twenty years I’ve called two places “home”: The first house I ever owned, and (I suspect) the last house I’ll ever own.

The first house I ever owned — and by “I” it should be understood that I am a part of a “we” as Krissy and I were both on the mortgage — was in Sterling, Virginia. It was a two-story with a full basement in the middle of a suburban cul-de-sac, with a mere patch of a yard that in the back opened up onto common land that was otherwise inaccessible to anyone else, so it was like getting three times the back yard for free. Sterling at the time was undergoing an upswing in terms of new businesses and restaurants coming into the area, and was close by a number of other well-heeled Northern Virginia towns, and a large number of friends (most gathered because they had worked at America Online, as I had, which was then headquartered a couple of miles from my house) were around and available for hanging out, and group dinners, and all other manner of fun and shenanigans. For me, it was perfect, and a place I could see living at for many years, and making a real home there.

We moved because Athena was born in 1998 and Krissy wanted her to know her family, who by this time had all moved to Ohio, the ancestral home of Krissy’s father, and in fact where Krissy had been born and lived her first few years before moving to California, which is where I had met her. I was not keen on living in Ohio and tried to be clever by saying I wanted a substantial chunk of land, which I figured we could not afford; Krissy found a big house on a lot of land in a price range we could easily manage, in a rural town called Bradford, which had just 1,800 people in it. We moved in February of 2001, when snow was still on the ground, and kept the house in Virginia just in case we decided we hated living in rural Ohio and need to escape back to suburban DC. A few years later we sold the Virginia house. We knew we weren’t going back. 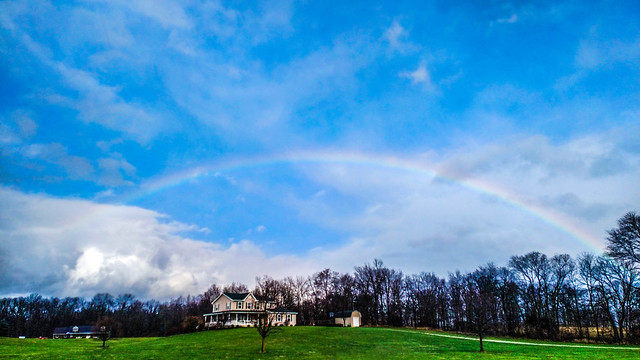 I noted several times before on this site that living where we do isn’t an intuitive fit for me, like living in Northern Virginia was. Prior to 2001, I grew up and lived in urban or suburban areas, all of which were reasonably multicultural, diverse, and passably liberal, all of which suited me. Bradford and Darke County, of which it is a part, is rural, overwhelmingly white (like, 98.5%) and is part of a congressional district that’s been conservative Republican since the 1930s. I’m fond of saying a traffic jam in Bradford is three cars behind an Amish buggy, which is definitely not my experience having dealt with traffic in LA, Chicago or in the DC area, three other places I’ve lived. And we have to travel an hour for Thai or Indian food, which frankly is appalling.

It’s not intuitive but it’s turned out well, despite my personal “fish out of water” status, for a number of reasons. One, people here generally good neighbors, as we try to be; that counts of a lot on both sides of the equation. Two, the Internet meant that I was never isolated either from friends or from work — nor was it a substitute for human contact since by that time most of my friends I kept in contact with online, and nearly all of my work was done through email and conference calls. It was the way I already did things. Three, I travel a lot, which means both that I get to see friends and other interesting folks when I do, and that when I come home, I don’t actually want to see a whole lot of people, which rural Ohio is frankly perfect for.

It’s also the case that I’ve simply come to love my home. It’s the place where my daughter grew up; nearly all of our memories as a family are here. All of my novels from Old Man’s War forward have been written here, in my office. I can see the Milky Way when I look up at night. Krissy is the architect of the feel of our house and has over the course of seventeen years made it into the place that is uniquely us. We enjoy our place and our community. I’ve become very fond of the landscape; rural Ohio is not breathtaking in the way, say, the Rockies are, or the Pacific ocean can be, but driving down the road, the gently undulating hills of are like green waves, and as you rise and fall with them it feels like the earth is breathing. It’s mesmerizing and comforting and it makes me happy. Oh, and we have pretty good sunsets. 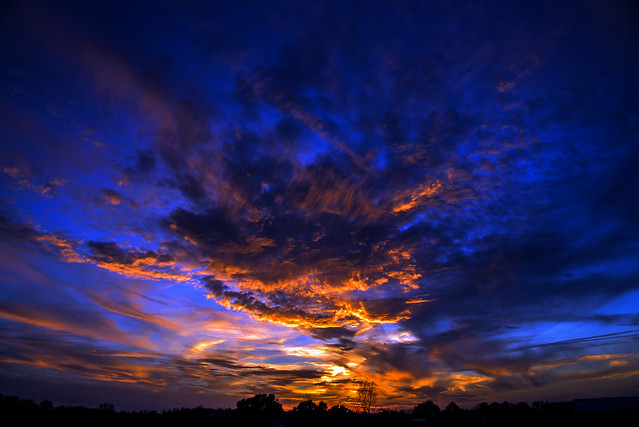 Athena is now off to college and one of the things Krissy and I had a talk about is whether we’ll want to move. Much of Krissy’s family — the reason we moved out here in the first place — has dispersed again, to California and other states, so effectively and ironically we’re the ones holding down the fort in Ohio. And we’re fortunate that if we wanted to we could afford to move to wherever we would like in the US. And as I travel the country I see a lot of places I think I could be happy being, if it came to that.

But I think we’re planning to stay. Part of this decision is just practical: It’s a big, nice house and it’s already paid off, and moving is a real pain in the ass in any event. But more to the point, this is our home. We’ve put work and time and love into it, and we like living here. We like to travel so we’ll do that, and visit places and people and do cultural things. But then we’ll come home, because it’s nice to be home, too. I could be wrong about this, but as it stands now, this is the last house we’ll own, and the last home we’ll have. That’s not a bad thing.

In short, home now is where home has been for most of these last twenty years is where I think home will be moving forward. All I really need from my current location is better Internet. But I suppose there has to be some penalty for making one’s home in rural America. As penalties go, it could be a lot worse.