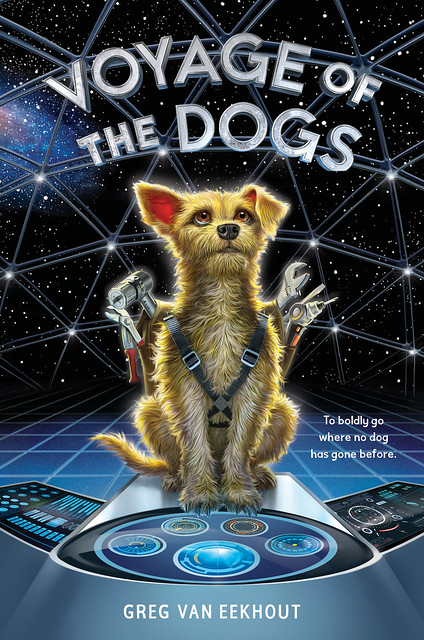 Yeah, okay, Greg Van Eekhout’s Big Idea piece for Voyage of the Dogs got me genuinely choked up. Read it and you’ll figure out why.

Spoiler: I don’t kill off any of the dogs in this book.  Why not? Because I’m not a monster, that’s why not.

Voyage of the Dogs is a middle-grade novel, meaning it’s marketed to readers aged seven to twelve. It’s about four dogs on a starship. When they wake up from cryosleep, they discover that the ship is badly damaged and the human crew has taken the escape pod and left them behind. The barkonauts struggle with dwindling supplies, cascading disasters, pack dynamics, and the feelings any uplifted, abandoned dog would grapple with. There’s adventure, there’s humor, there’s emotion. There’s also butt sniffing, because dogs.

So, that’s basically the pitch I’ll be using with most audiences, and if you stop reading here you’ll have a good idea what this book is about. But this is Scalzi’s blog, and I know you are a special and sophisticated audience, and I want to go a little deeper and tell you why I wrote this particular book at this particular time. I want to tell you why, after six previous novels, this was the only book I could write.

Life can be really hard sometimes. A few years ago, I went through one of those really hard times. My elderly parents’ health had been wobbly for a while, but it became clear that the wheels were really coming off the cart. If you’ve been through this rite of passage, you know what can be involved: ER visits. Fighting with doctors and insurance companies. Finding caregivers. Finding money to pay for said caregivers. Maintaining your own life while maintaining the lives of other adults. It’s a sad, stressful, laborious bunch of stuff. But I was lucky that I wasn’t alone in this. I had my wife. I had friends. And I had my dog.

Dozer is some kind of small terrier mix. He looks much like Lopside, the dog on the cover of the book. (That’s not an accident.) He eats poop and a few months ago he swallowed an entire dead ground squirrel. He’s obnoxious, scrappy, yearning, earnest, gross, and perfect. He is a very good boy. Petting him lowers my blood pressure. It calms my heart. It loosens my knots and releases the vice squeezing my brain. In fact, Dozer was so helpful during this time that we decided to get another dog, Amelia. Amelia is a mix of corgi, rat terrier, and whatever the heck. She’s yappy. She pees when she gets excited. She growls at me when I dance. She is kind of awful. And she is perfect. A couple of weeks before my mom died I took the dogs to her care facility and put Amelia in bed with her for a cuddle. At this point my mom was usually too weak to talk, but she managed the last words I ever heard her utter. “Sweet. Soft.”

On the day my mom finally passed away, the hospice coordinator asked if I needed anything. I told her I needed a dog, so she brought over the care facility’s house dog, a hairy little thing named Winston. Winston eats entire cups of sour cream, plastic and all. He likes to go into residents’ rooms and knock over their trash bins. I have a picture of me carrying Winston around less than an hour after I lost my mom, and there’s a genuinely happy smile on my face. Winston was my wingman that day.

So, skip ahead a few months. Both my parents are gone. During this whole period of care giving, I’d been working, writing, traveling to book events, fulfilling contractual obligations, but now I was out of contract, no books in the publishing pipeline, no books in any state of completion, and also without an agent because I’d parted ways with mine during all this stuff. I had to work.

I looked at my list of ideas, and I considered the headspace I’d have to occupy for months or more to turn one of those ideas into a completed book. They were all cool, chewy, fun ideas, but all of them dark. And I could not bear occupying a dark space. So, what then, could I bear to write? Something fun but not frivolous. Something hopeful but not packed with sweet lies. Something that could break a reader’s heart but also promised to mend it.

The answer was obvious. I could only write a book fueled by the strength and comfort given to me by Dozer and Amelia and Winston and all the dogs in my neighborhood and all the dogs on the Internet.

We often ask if people deserve dogs? The barkonauts in Voyage of the Dogs ask themselves the same question. I don’t have the answer. But I know I need dogs, and I needed to write this book. I could not have written a different one. I’m grateful for the chance to share it with you.