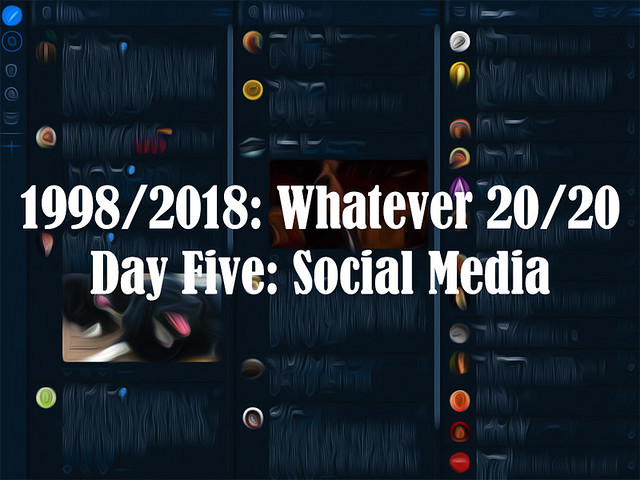 Was there actually even social media in 1998? Oh, my, yes. There was. And it acted in pretty much the same way as it does now, in all the good and bad ways.

The players were different, of course. In 1998, in place of Twitter and Facebook you had USENET and America Online (as two examples). Blogs were just starting off, and the word “blog” itself hadn’t really gained currency, so they were mostly known as “online diaries” or “online journals,” but .plan files and other such similar analogues were around, doing the same sort of thing. There was IRC rather than Slack. And so on. Everything that’s prominent today had its analogue and inspiration in something else.

And even in 1998, these weren’t new ideas — AOL was the upstart muscling in on CompuServe’s and GEnie’s territory, don’t you know, and the “Web” was still in the process of being bolted onto (and over) the existing Internet, with its gopher holes and veronica searches and what have you. And don’t forget BBS’s, which you had to dial into directly! With your 300 baud modem! Uphill and in the snow! 1998 was already iterative, my friends.

What’s certainly different now is scale. AOL at its height had something like 34 million subscribers; Facebook has more than a billion users, and people are worried about Twitter because it only has 300 million users. And with scale comes scale-related problems. There were always trolls, as an example, but there is a difference between having to deal with a single persistent troll on alt.society.generation-x, and dealing with literally hundreds of trolls on Twitter bound and determined to wreck you. Social media, or more accurately the people who run and administer it, have done a very poor job accounting for the scaling up of its influence and reach, which is one reason we have the beef-witted president we do and why the current iteration of social media feel like they’ve reached a bend in the curve, where the toxicity and bullshit have eroded their position.

For a lot of people it’s not a lot of fun being on social media right now, and that’s a problem for the social media companies, who rely on ads. Here in 2018, it really does feel like we’re ready and waiting on the next iteration of social media, the one that makes it enjoyable again for most of us to hang out with our friends online.

Was it fun in 1998? I think it was, but in regard to blogs in particular, it was more that it was exciting. There was a sense of being on a frontier of sorts — a place not yet colonized and so a place of invention, or reinvention, if you wanted that instead. We were doing things that were never done before! (In fact they had been done before, many times, in many other media, but they were never done on the Web, in html, so.) There was status conferred just for being out there in the wild, with your online journal the only signpost around for figurative miles. The blogosphere was still (barely) small enough in 1998 that you could read everyone and keep up with their doings. The full blossoming and influence of the blogosphere was still most of a decade away at least, but it seemed like something could happen there.

And it kind of did. I don’t need to recount the glory days of blogs right now, but I will say that it took until about 2008 or 2009 for me to be better known as a science fiction writer than as a blogger, and of course my first two Hugo awards were for writing originally posted here, so even as my primary notability began to drift over, the blog writing and online presence was (and still is) a significant component of it. Even now there are people who read my blog or follow me on Twitter who are vaguely surprised when I mention I have books out. Oh you do that, too? That’s a nice side gig. Yes. Yes it is.

In terms of casual foot traffic, Whatever peaked in 2012; front page traffic here has dropped by about half since then. I can drive 2012 levels of interest in a post by pointing to it on Twitter, and the blog has roughly 50,000 followers via WordPress, email and RSS (yes, still) who have what I write here show up for them somewhere else. But no matter how it’s sliced, the “blogosphere” has become something of a ghost town. Many blog writers have simply moved over to Facebook or Twitter as their main online presence because that’s where their friends and/or fans are, which is entirely fair. Some people like to blame Google for the decline, because it killed its popular RSS reader, which was one way people kept up with their favorite blogs. I think that’s a factor, but honestly not much that much of a factor. I think it’s more simply because maintaining blogs is a lot of work and other types of social media are easier, both in maintaining a presence and in getting/growing an audience.

Which of course is a bit ironic, here in 2018, where the famous and non-famous alike are noping out of social media because it’s such a drag now, and random chucklefucks can show up en masse to be a pain in your ass. If only you kept your blog up! People would know where to find you! Well, no, not exactly — there’s no guarantee that anyone will find your blog again if they’re stuck in the Facebook/Twitter/Instagram social media gravity well. We’re all waiting for the next things, not necessarily the old things to come back.

I should note that here in 2018 it’s not all doom and gloom on social media front, at least not for me. I am having fun. The reason for that, not entirely surprisingly, is because I filter the shit out of things. Here on Whatever, of course, you’re all familiar with how that works. On my private Facebook account, I limit “friends” to people I know in real life, make sure my posts only go out to them (and not to “friends of friends,” as “friends of friends” are inevitably the drunken racist uncles of the online Thanksgiving known as Facebook), and I don’t talk politics at all — it’s cats and kids and career, and I don’t comment on political posts that other people post, either. As a result my Facebook presence is almost placid. It’s nice to have some place like that online.

On Twitter, I filter out accounts with default icons, and accounts that don’t have verified emails and otherwise employ the Scamperbeasts rule to people who come bother me. The Scamperbeasts currently have 14k followers, so that cuts substantially the number of annoying people I feel obliged to engage with. And truth to tell I don’t feel obliged to engage with people I think who are trolls regardless of their follower count; I employ a “one strike” rule pretty much for everyone these days. Twitter also lets it users mute specific conversations now, which I find to be super-helpful when a particular tweet of mine gets picked up by piles of jerks. There’s also a thing which I consider to be something of a “nuclear” option that I haven’t used yet, but might if things become especially contentious and/or I get incredibly busy, which is the option to see tweets only from the people I actually follow. If I had massively more followers, or was a woman of some note in the world, I would have probably already engaged this option.

Fortunately me, it’s not come to that, and the strategies I use are more than enough to handle the occasional jerk eruptions that come my way. And again, these strategies aren’t that different than the ones that have always been a part of being online. On the USENET in 1998 and earlier, we had “killfiles” — lists of people whose posts would simply not show up in our newsreaders. When we consigned someone to a killfile, they went *plonk*.

Well, the plonk never, ever went away, nor should it have. Online, it’s only ever been the way to deal with others — the option not to hear them. Yes, I know there is a whole cadre of people who like to maintain that muting, blocking and otherwise filtering is somehow censoring them. Those kind of people are the same kind of people they were in 1998: Generally, self-absorbed, toxic assholes.

Social media can be a lovely place, but it’s work for it to be that. If you don’t have the tools (or alternately, the tools are not obvious or easy to use), it can be pretty awful, and that awfulness scales upward the more people there are online, and the more people who know who you are online. I knew people in 1998 who threw up their hands and walked away for the social media of the time because it was all too much, so here in 2018 I certainly can’t blame anyone who does the same. I was willing to deal with it back then, and here and now I don’t think I’m going away either. But it would be nice if the next iteration of social media finally had baked into its interface the idea that not everyone is nice to everyone else, and not everyone means well to everyone else. Just like in real life.