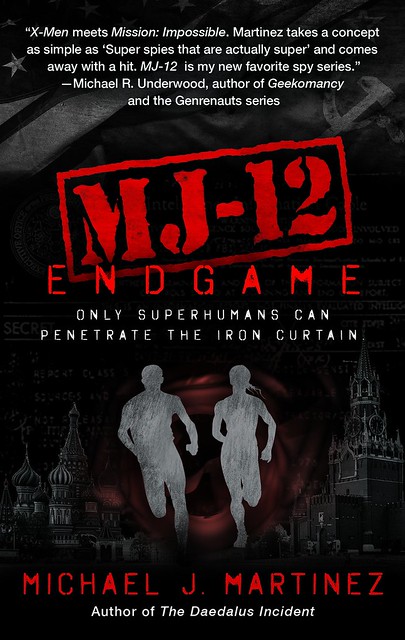 In today’s Big Idea, Michael J. Martinez reminisces back on his college days, and how an offhand comment back then informs MJ-12: Endgame, the finale of his supernatural spy series.

I went to a university with a heavy fraternity/sorority presence; the Greek houses were a major hub of campus social life. During my freshman year, a couple of upperclassmen asked me to consider joining their houses. Heady stuff for a newbie from the sticks, right?

Of course, once I delved into the whole process, the hazing thing reared its ugly head. Now, the frat brothers I knew swore up and down it wasn’t hazing per se, but rather simply testing a pledge’s resolve and fitness to join the fraternity.

Even at 18, I wasn’t that stupid. “Look, you’re telling me you want me to join the club,” I remember saying to one of them. “If you want me, why should I then have to go through hell to get in?”

His answer: “Because we’re better than you, until you prove otherwise. I want to give you that chance.”

We’re better than you.

What a terrible sentence, those four little words. Arguably, that single sentiment has caused humanity more pain than any other. It is, I would argue, a fundamental part of human nature and the most dangerous flaw humans have.

How many interpersonal relationships burn out because of this? At work, at school, at home, you can hear it echo in every little office conflict, every academic rivalry, every little resentment in a relationship. It’s insidious.

And by what measure do you make the claim? Some of it is objectively measurable, sure – wealth, experience, success in careers or relationships. But the problem with that, of course, is that after you measure that, what do you measure it against? What’s wealth to someone who simply doesn’t want it? Is the Wall Street executive better than the artist because of the relative size of their bank accounts? Every religion of the world says it’s the one true way, but nobody’s come down from on high to provide arbitration.

(And wouldn’t it be a cosmic joke if that did happen, and the answer was, like, “It was Marduk all along. You guys have been off for three millennia.” Oops.)

“Better” is a highly subjective measure, and that’s why people fight over it, because everyone is convinced it’s actually objective.

But what if it were, if not exactly measurable, but at least obvious?

What if you had someone who really could say I’m better than you and had something that nobody else had – an ability beyond human measure, one that was demonstrably superior to everyone else?

Ultimately, that entire debate is at the crux of MJ-12: Endgame and, really, the entire MAJESTIC-12 series. On the surface, it’s a cool spies-with-superpowers thriller set during the early days of the Cold War, with teams of Enhanced agents from the Soviet Union and America’s MAJESTIC-12 program facing off against each other around the world.

And yet, the Cold War was also, at its core, all about we’re better than you. And what happens when your superpowered covert agents take a look around at the masses of humanity and start thinking the same thing?

The comic books I grew up with never did a great job with showing that sentiment in their heroes. Superman is actually a pretty great guy. He could rule the world with an iron fist inside of a week, but he doesn’t. He’s nice! He’s arguably the most noble character in pop culture simply because he quashes that innate drive for superiority and control, knowing full well he could act with impunity.

How would you react if you were granted a superpower, though? Would you be altruistic? Would you kick back and let that ability make bank for you so you could be super comfortable? Or would you try to “make things right” because, at the end of the day, you’re better?

That question is at the heart of MJ-12: Endgame, which closes out my MAJESTIC-12 super-powered Cold War series. Even if what you can do is superhuman, does it make you a better person? Are the other people fighting for their beliefs lesser people simple because they don’t share your beliefs? If you have the ability to impose your will on others, should you?

Today, we see so much of this in our daily civil discourse. Some of it is truly horrifying. We’re better than you is the worst impulse of human nature, and the most common, and it’s being fed every single day with more and more fuel.

We’re better than you leads to conflict, war, catastrophe. In MJ-12: Endgame, it brings the world to the very brink. The book is, of course, primarily a fun spy thriller with all sorts of twists and turns and cool powers and stuff. But I hope it also gets people thinking about that sentiment, those four little words full of poison. I hope it gets them to think twice, because no matter who we are and what we do, we are not better than anyone else. Different, sure. But not better.

And for the record, I never joined a frat.