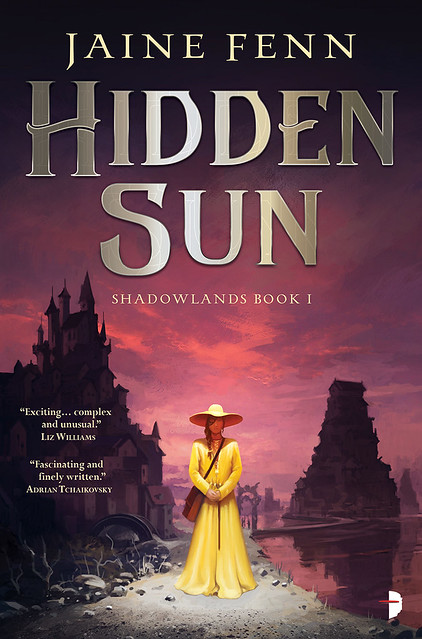 Autho Jaine Fenn starts this Big Idea piece with an admission — and then explains how she got around it for her new novel, Hidden Sun.

Don’t tell anyone, but I’m a fraud. Most writers have bouts of imposter syndrome, but when it comes to writing scientifically rigorous fiction, I live in special fear of being found out. The gaps in my science education mean I have been known to, shall we say, err on the side of vagueness in my science fiction. Or invoke Clarke’s Third Law. Or ask a grown-up for help.

However, Hidden Sun isn’t science fiction. It’s science fantasy. In my teens, while my teachers were telling me that nice girls don’t do science – early 80s rural England, what can I say? – my reading was moving from fantasy to science fiction, via writers like Anne McCaffrey, Gene Wolfe and Ursula Le Guin. I still liked the feel of classic fantasy – being able to retreat to Middle Earth got me through some difficult times ­– but found myself looking for something more in a story, some shadow of logic and learning, an underpinning of esoteric knowledge of a slightly different flavour to that usually labelled ‘magic’.

Then I went to college (or ‘uni’ as we Brits call it). I did an arts course – like a nice girl – but when I found the ‘astronomy for arts students’ additional module, I was right in there. The course delivered: heaps of cosmology, minimal maths. And it turned out my lecturer was a geek; he’d actually devised the astrophysics Brian Aldiss used in the Helliconia trilogy. My mind was duly blown.

This positive early experience left me with a yen to one day write a book whose protagonist driven to discover how the universe works without the tools or support of a scientific establishment. That half buried desire resurfaced a few years ago and the result is the Shadowlands duology, of which Hidden Sun is the first book.

Rhia is a natural enquirer, part of a diffuse and informal network of proto-scientists living at a renaissance level of technology in isolated pockets of shade – the shadowlands – dotted across a bright, hot, alien world, known as the skyland. The skyland beyond her land’s borders interests Rhia, but the sky overhead fascinates her. She just wants to spend her time observing the stars and coming up with cosmological theories. Unfortunately she has to contend with the politics of a squabbling nobility, the assumption that women don’t have enquiring minds and, most recently, the shocking disappearance of her feckless younger brother.

I loved it when elements of Hidden Sun – the court intrigue, the murder mystery, the skyland with its alien/human symbiotes – came together in a logical yet organic way, accreting like a solar system round a star. And at the heart of the Shadowlands duology is that unconscious desire, building for years, to spend time with a character far smarter than me but without the mentor I had, who is fired up with the desire to unlock the secrets of the universe. And for her to succeed.

I’ve no idea if my old astronomy lecturer will read this post. But I remain indebted to him for the grounding he gave me in the most cosmic of the sciences, which is why it seemed only fitting to dedicate Hidden Sun to him.