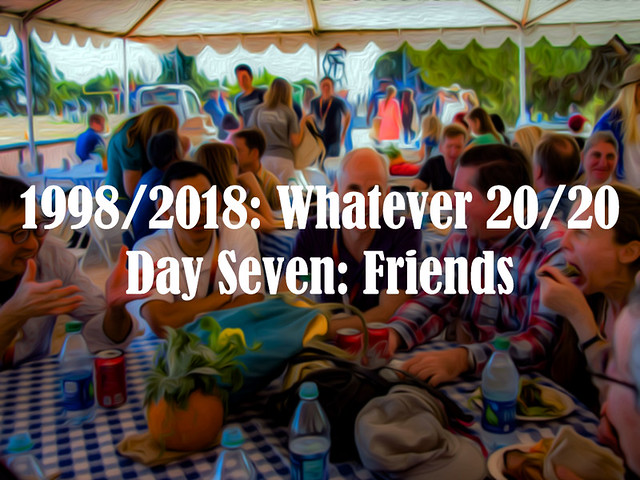 In 1998, I believed that I had probably made most of the friends I would ever make in my life.

At the time I didn’t think this was an entirely unreasonable assumption, nor was I depressed about it. I was 29 then, and there is some generally accepted wisdom which states that you’ll have most of the friends you’ll ever have by that time, and then in your 30s you all begin to disperse as time and family and work obligations make it harder for you to keep those bonds intact. Back then (as now), I wasn’t entirely convinced about the “losing friends” thing, but I was married and settled and with a child on the way, so realistically I was, yup, I’m probably pretty much topped out, friendwise.

Which would have been fine! At 29, I had friends I had made in elementary school, and at middle school, and in high school, and in college, and at my first job at the Fresno Bee, and at my second job at America Online. I stayed in touch with them all and saw them from time to time, and with the AOL friends, because I was still in the area even after I was laid off, I saw them all on a regular basis, with communal dinners and parties and hangouts. If indeed at age 29 I was going to have all the friends I would ever have, I was doing pretty well for myself.

How did that happen?

Well, I became a science fiction author, for one thing. Science fiction and fantasy, more than any other genre of literature, has organized itself so that people in it can meet other people on a more than occasional basis. We have big conventions. We have small conventions. We have literary events at bars. We are generally fairly tech savvy and from the very first iterations of the public Internet stuck ourselves there and waited for others of our ilk to find us.

And we welcome in new people assiduously. My first science fiction convention, I mentioned in hotel lobby to my editor Patrick Nielsen Hayden, who was the only person I knew, that I knew no one but him. He literally reached out into a passing stream of people, grabbed someone walking by, and said to them “This is John Scalzi, he’s your new con buddy,” and then walked off. And that person, who was Cory Doctorow, looked over at me and said, “All right, then, come on.” And that was that. By the end of the night, I had more new friends. Besides Cory: Charlie Stross. Justine Larbalestier. Scott Westerfeld. Nick Sagan. I met Walter Jon Williams and Bob Silverberg and Alan Beatts, owner of Borderlands Books, all of whom would become friends as well. It was good day, that first day at my first-ever science fiction convention.

For the next few years after that, there wasn’t a convention that I went to where I didn’t come away with at least one new friend, someone who I continue to be friends with now. And, to be clear, not just among the writers. I was befriended by folks in fandom as well, who came to the conventions to see their own friends, and who were kind to me long before my name became known for anything other than being on my convention badge. Even now, through science fiction conventions and fandom, I get to meet new people who I would like to be friends with, writers and others as well. It is in fact a pretty great way to meet folks.

Another thing that’s helped me meet and make new friends, and which I acknowledge is unusual, is that people often want to meet me. They’ve read my books, or follow me online in some fashion or otherwise have heard of me, and because of that, one part of the whole “get to know people” thing, the part where they are all who is this person and what do I think of them?, is taken care of. It doesn’t mean you can’t make a bad (or even just blandly neutral) impression, but the interest in you as a person is already there. If you are also interested in meeting them, because you admire their work or presence or whatever, so much the better. It may not be the basis for a lasting friendship, but it’s not bad either. I mean, I once got to have lunch with Tom Hanks because he wanted to meet me. We’re not best friends forever now, but, you know what? It was a pretty great lunch.

(I will note I think this is largely beneficial because I’m not at the point where people knowing of me impinges on my day-to-day life, i.e., I’m not actually famous. I have friends who are actually famous and who have to route around a wave of people who really want to meet them and would loooooove to be their friends, and who aren’t aware that this sort of adoration, even when coming from a good place, can be alienating and tiring to deal with. Most of my famous friends are very good at handling this sort of thing, and, to be clear, most people who interact with the famous people I know are considerate and lovely people who know how and when to disengage. The ones who miss that cue entirely are relatively few. But when you’re famous, and so many more people know you than you know, even those relatively few add up. Fame can be isolating, so if you think you want it, make sure you really want it. And that you already have friends.)

It’s a shibboleth that the friends you make as an adult have less connection to you than, say, the friends you make in high school and college, which are times and places where everything is new and you’re thrown together with your friends in a way that real life doesn’t allow. This hasn’t been my experience, however. Many of the people I think as being friends of my heart are people I’ve met as an adult. Maybe that’s something about me, and maybe, particularly in regard with friends I’ve met through science fiction and fantasy, that’s something to do with the fact that when we get together, it’s for three days in a row where we’re not doing anything but hanging out, relaxing, talking for hours and ordering drinks from a bar, i.e., not actually a real world experience where you have to schedule three weeks in advance for a 45-minute lunch. Yes, occasionally we have to do panels. But that’s also not a real world experience.

But more than that I think it’s also just the willingness to be a friend, and to open yourself up to the possibility of friendship, of the sort you would like to have, if time and distance and life weren’t impediments. If you make that choice, you can find ways to work with the practical restraints the adult world sets on you. Make friendship a hobby, is one way of looking at it, I suppose, something you do for yourself, and occasionally get to do with others.

I’ve been blessed with friends I’ve made as an adult, but I’m also blessed with the friends that I’ve had for decades. I went to the wedding of a high school friend this summer, and last year I went to my 30th year high school reunion. In both cases, in the company of people who knew me back then, it didn’t feel like we were making up for any lost time. It was just good to be in each other’s company once more. I feel that way with so many of my friends, regardless of how much time we’ve spent apart.

You may ask: so, Scalzi, what’s the secret for having, getting and keeping friends? Well, I can tell you three things. One: Hey, social media? It can be a good thing! Facebook is where I keep in casual contact with friends from elementary school onward, and even just the quick pictures of kittens and kids and spouses and such makes a difference in keeping a connection. I specifically keep a private Facebook account for the people I know in life (I have a more widely available fan page for career stuff), and keeping that focus strictly on friends is useful. Two: If you’re my friend, unless I’ve heard otherwise from you, I assume we’re still friends, even if we don’t keep in constant contact. This is because, well: Life. Kids and careers and family and everything else take time, and I get that I can’t always be (or should be) a high priority. But I would also like people to know that when they can come back around to me, I’ll still be happy to see them, and to reconnect. This might be a perspective you can see value in for yourself and your friendships.

Three, and I think this is important, but maybe a little tricky: When you meet people, want nothing from them. Just be open to them, and to the experience of the moment. Don’t worry about if you’re going to be friends or anything else; just enjoy the time you get to have with them right at the moment. I think people get so used to people wanting or needing something from them that when they get to meet someone who doesn’t, and is just happy to be there, they have the potential to relax, and be themselves, and enjoy themselves in the moment, too. This is good practice for anyone you meet, but also and especially for the people you’ve wanted to meet, for whatever reason. I’d note this is not the same as “playing it cool,” which I think means putting on artifice instead of being yourself. Don’t be cool; be in the moment. Be someone that this other person can be themself to. That’s the best person to potentially be a friend to.

I no longer think I have met all the friends I will ever have in this life — I like to think I still have some to meet, and that there are still some people I will be able to take into my heart. But I can say this, at 49, just like I could say at 29: If in fact I’ve met all the people I will ever have as a friend, I’ve done pretty well for myself. There are so many of them and they have made my life full. I am lucky and blessed to know them, and I hope they feel the same way too.