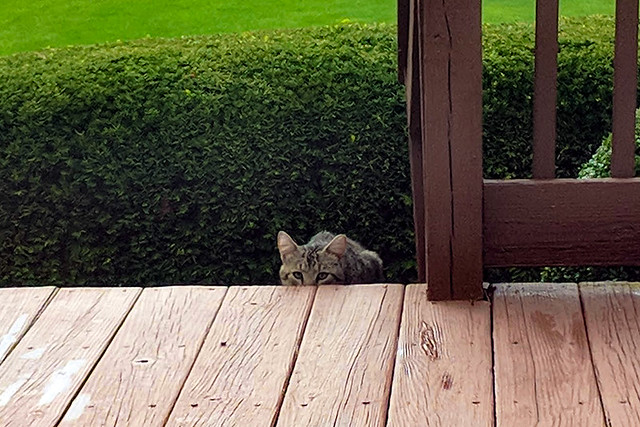 Like this neighbor cat cautiously peering onto our deck, let’s pop our head up to see what’s going on, shall we?

Kavanaugh’s Supreme Court confirmation hearing: Well, this has been a mess so far, if an entertaining one, if you’re the sort of person to be entertained by a car wreck. And of course it didn’t have to be a mess, but then the GOP and Trump administration decided not to release a lot of documents, which prompted an open rebellion by the Democrats, who released documents and dared the Republicans to do something about it, and then there Kavanaugh himself, who seems annoyed he has to pretend to answer questions at all.

And now of course there’s the question of whether the documents released show Kavanaugh perjured himself in front of Congress back in the day, the responses of which range from “probably not, if you allow for context” to “yes, and let’s impeach him from the DC Appeals bench right now.” What do I think? Well, I think I have no idea how to judge this particular thing, so I’m going to let other people fight about it.

But I do think the polite fiction of “Roe v Wade is settled law” that Kavanaugh tried to pass off to Susan Collins a bit ago is a bunch of bullshit, and given he also referred to contraception as “abortion-inducing drugs,” it’s probable he’s not a huge fan of that either, and otherwise as someone else just said on Twitter, he’s your basic Federalist Society bubble boy. So I’d be happy not to have him on the court, and to have him skitter back sour-faced to the DC court of appeals.

The thing is, if Kavanaugh is punted — which is actually possible, albeit deeply unlikely — the choices for any other Supreme Court candidate don’t get any better while Trump is in office. Clearly the Democrats are hoping they’ll get the senate in November, which will put a new wrinkle on things, but that might be optimistic. In the meantime, it’s not like Trump won’t pick someone who isn’t hostile to women’s right to control their bodies, or voting rights, or gay rights, or doesn’t think climate change is at best an interesting theoretical puzzle. So if Kavanaugh gets chopped, we’ll be back here again, one way or another.

Which is one reason I mentioned to a friend yesterday that in 2020, should Democrats get the presidency and both houses, there’s a pretty good chance we’ll see the Supreme Court expand to 11 members. Look, if the GOP is going to stack the court by denying a Democratic president their court pick and then rushing through two other picks, including one who have may have perjured himself in front of Congress, I’m not sure the Democrats are going to be inclined to let that sort of packing stand. Adding two more justices may be easier than trying to impeach Kavanaugh.

Alex Jones removed From Twitter: Jones, a performatively unhinged purveyor of questionable health supplements, was finally booted from Twitter, along with his business site, after similar puntings from Facebook, YouTube and other online services. There was an ostensible direct reason for this (Jones was a harassing boor to a reporter and used a Twitter service to record the moment), but as I noted, on Twitter of all places, “Alex Jones being punted off Twitter for this one specific thing is sort of the flip side of Al Pacino getting the Oscar for Scent of a Woman: Sure, okay, but everyone knows it was for career achievement and it should have happened sooner.”

And yes, Jones definitely should have been punted from Twitter before now — a man who makes his money by harassing the parents of school shooting victims is not someone I’ll be shedding a lot of tears for. Jones’ own site is still up and running so he’s got his printing press, as it were; people who want to find his particular brand of bullshit can still do so. But now he’s harder to find! Well, I mean, okay, but if so, it’s not Twitter or Facebook or YouTube’s fault Jones’ followers are not smart enough to enter a URL into their browsers, now, is it?

I’ve essayed the issue of free speech online before, and in detail, so I don’t need to do it again now, but I will say that I do find Twitter CEO Jack Dorsey’s recent assertion that he sees Twitter as a “public square” a bit of meretricious nonsense. It’s emphatically not a public square — Twitter is a for-profit corporation that makes money selling advertising to its customers, and has made Dorsey a billionaire (currently) six times over. Dorsey’s allegiance isn’t to the public weal, it’s to his company making a profit. The “public square” bit is just marketing, and Dorsey’s excuse for letting certain bad actors stay on the service as long as he felt he could extract value from their presence.

Alex Jones and his hijinks are past their sell date now, and Twitter was getting bad press for being the last service that tolerated his supplement-selling assholery, so out he goes. And sure, there are a bunch of dimwits who are grousing about “shadow banning” or whatever, but I have to tell you, enough of those “I’m shadowbanned!” dumbasses show up in my Twitter comments that I know that’s bullshit. And as for them being punted/blocked/banned/whatever, well, I understand it’s difficult for people who are assholes to understand they are being removed from polite society because they are assholes, and not for any other reason. But it doesn’t mean their being an asshole needs to be tolerated by others, or that it has a constitutional right to exist on a privately-run service.

On the subject of Twitter, people have noted that friends of mine have quit the service, some in part to protest the continued presence of Alex Jones and his nasty bit of business and/or because they’re tired of dealing with the other assholes there and/or because it’s just not fun anymore. These folks were wondering if I also plan to be leaving the service anytime soon.

My answer: Probably not. One, I have 150k followers there, mostly fans, so it’s a really good way of letting lots of people who are affirmatively interested in me know what I’m up to. Two, while some friends have dropped, many many others are still there, and it’s how we chat and stay in touch and in each other’s lives on a daily basis. I live in rural Ohio, folks. My writer/creator community is far-flung from me and from each other, and hangs out online. I’d miss them.

Three, I’m very clear on why I’m there and how I use the service, and I’m clear about it to everyone else, too. Four, after 30 years in the public eye one way or another, I’ve gotten a pretty thick skin and no qualms about removing assholes from my sight. 99+% of what I see on Twitter at this point is friendly people, and the unfriendly people I usually only ever see once.

And finally — and this part should not be read as a criticism of anyone dealing with online services — I don’t really expect Twitter or any other online service to be other than wildly flawed. Twitter was built by people who wanted to make shitloads of money monetizing other people’s trivia, and on that score it’s succeeded very well, as has Facebook, Google and a few others. Tech billionaires are basically callow dudes in hoodies who never learned how to deal with humans except for one specific slice of their needs/wants that they could extract value from, so honestly I don’t expect their creations to reflect anything other than that. Change comes only at the last possible minute and only when it threatens that extraction of value. If you know that going in, it makes dealing with the things they create much easier.

This is not to excuse tech billionaires from being truculent, vaguely libertarian shitlords, or to suggest that people should just accept the awfulness of the services they’re being offered. Tech billionaires should make an effort to be self-actualized humans with some goal other than sitting on a massive pile of ducats and thinking it’s deserved; we should all work to make the services they provide humane as well as narrowly useful. And if neither are happening on a schedule that suits you, you should bail on the service. No one owes a tech billionaire their value. I am saying that for me, my tolerance both of tech billionaires and their flawed services is reasonably high, as long as I’m getting something useful out of it too, on my terms.

Which I am in regards to Twitter, so I’m likely to stay on it for a while.

And thus we come to the end of the first week of the Whatever Digests for September. I hope you’re enjoying them. If you have thoughts so far on the format, drop them into the comments. I’m curious what you think. In the meantime, and to close, enjoy this picture of a Smudge on my monitor. The Digest will see you again on Monday. Have a good weekend. 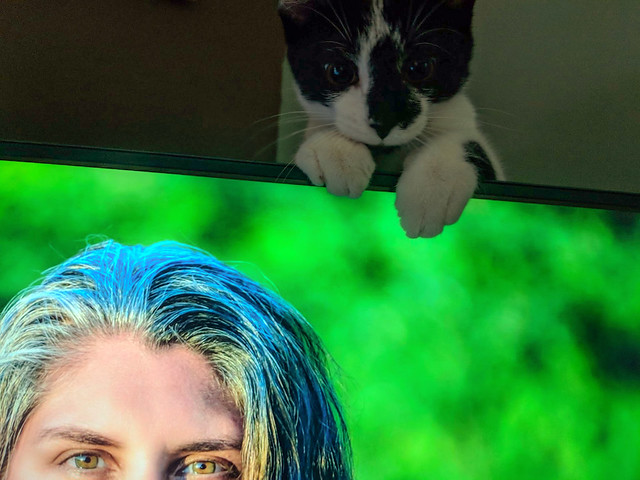